It popped up on my Gbase list this morning... :jim

Don't get me wrong, it's a nice start -- but it really needs more controls for optimum fine-tuning. 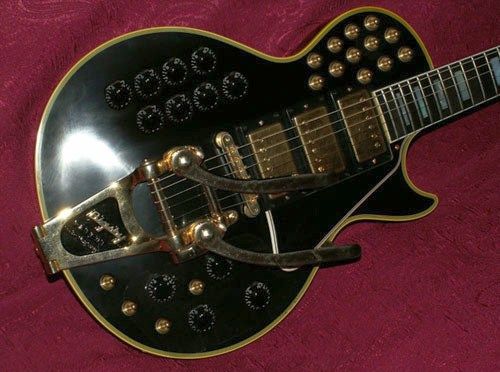 Holy crap that photoshopped picture, a relic from the early days of the internet! It must have 15 years or something...

Ed Driscoll said:
Don't get me wrong, it's a nice start -- but it really needs more controls for optimum fine-tuning.

Is that one of Les Paul's ? Sure Looks like it . Les did like his Bigsby on his guitars !

zhivago said:
This looks SO cool!!!!

It popped up on my Gbase list this morning... :jim

Sweeeet!! Did it come like this from the factory as a custom order, or were the mods done afterwards?

I assume it was a crazy factory one-off...I just love the Switchmaster vibe! :hank

Wooooow, awesome guitar. A switchmaster that goes to 11 :dude:. The middle pickup make sense on this one :3zone

Aren't the Harrison's connected with this business?

That is off the charts cool in my book!

I wonder if it's in the shop? I'll have a walk to Denmark Street today and see.

There is a few odd Customs in Robb Lawrence’s book.
I think one like this is pictured.

JJ Jones said:
There is a few odd Customs in Robb Lawrence’s book.
I think one like this is pictured.
Click to expand...

I played it today. It’s the same guitar as is pictured on page 167 of that book.

I totally dig this...is it speculated as a factory original, or it's known?

latestarter said:
I totally dig this...is it speculated as a factory original, or it's known?
Click to expand...

In the Gbase listing they state that it's a factory original, custom order.

Here are some of my observations (just observations - I'm not an authority on this type of thing and wouldn't want to authenticate a guitar of this value):

• The tuners have been changed (as you can see from the pics) but the remaining footprints are wrong for a custom - it should ideally have Super Kluson outlines, but it has standard Kluson outlines (it's also had Schallers by the look of the extra holes). Has anyone ever seen a Custom from any year with standard gold Klusons on it? Unless it was a factory Grover to start with - then Klusons, then Schallers, then back to Grovers?

• The bridge has been changed to a wired one. In the Rob Lawrence book the bridge looks original, maybe it sunk and had to be replaced?

• The dots at the end of the fretboard binding are badly installed and look to be too low in the binding, could have had work done in that area though.

• The binding is very yellow, way more than any of my vintage Gibson's.

• The nut's been replaced.

• The last inlay is thinner.

• None of the wear on the pickups seems to match - some of which you could put down to different people with different playing styles owning it. The middle pickup has very little wear, maybe whoever owed it dumped the pickup into the cavity so it didn't get in the way?

• It's heavy, or at least it's a couple of pounds heavier than my '56, although it's got an extra PAF, two more pots and that 4-way switch!

• If it is a custom order then they took an already drilled body and modified it - you can see through the gap in the 4-way that it's been drilled for a toggle switch and then cut for the switchmaster switch afterwards. The paint goes into the cutouts, so it was painted after the work was done

• The screws holding the switch in place aren't the screws typically used, but that doesn't mean they're not original.

• The top finish doesn't have any of the depth my custom does (even though mine is heavily checked you can see the paint is rich and has depth to it). It also doesn't seem to have the patina the hardware displays. Again, that's not to say there's anything untoward, just that all the vintage customs I have played have had rich, glossy black paint with a real depth to the finish.

If anyone else gets to check it out I'd be interested to hear if your observations tally with mine.

It's very, very cool but not without issues.

What about the extra set of knobs - do they get in the way while playing?

It looks blue in my book. :hmm
R

Hi...late to this thread but I remember seeing John Miles playing one of these in the 70s. Can't have been too many of them made, could have been the same one perhaps?