BLuesGuitarMart said:
The only thing to watch out for is sellers believing they are more valuable than they are. I've seen them listed for 2,000 USD+ although they never sell for that amount. Somewhere between 800 USD and 1,200 USD is where they should really be IMO.
Click to expand...

Around here I keep seeing people trying to get top dollar for the locking nut/floyd type bridge models. wrong!
R

I have a '94 - '95 MIJ Fender Custom Telecaster w/Bigsby. The profile of the neck is exactly like the neck on a '66 Fender Telecaster I owned years ago.

It's a great guitar, but as some have stated the electronics on most were cheap.

It's a fantastic guitar now and if I had to start selling my guitars it would be the last to go.

RicOkc said:
I have a '94 - '95 MIJ Fender Custom Telecaster w/Bigsby. The profile of the neck is exactly like the neck on a '66 Fender Telecaster I owned years ago.

It's a great guitar, but as some have stated the electronics on most were cheap.

It's a fantastic guitar now and if I had to start selling my guitars it would be the last to go.
Click to expand...

I kind of wish that I pulled the trigger on a MIJ '62 Custom Tele back when they were affordable. They (mostly) had lighter bodies with neck profiles that weren't as paper thin as the AVRI's that came out about 10 years ago. The new USA Custom telecasters are cool, just not 2K cool.

Bought an E series 84/85 '62 MIJ Tele Custom from the original owner little over a year ago. He was a gigging musician so it is played in and feels great but was very well taken care of. All original, haven't upgraded the electronics yet. What a great guitar. The finish is thin both body and neck, it's light and it just rings. Hit certain notes and unfret them and they continue to ring out for a long time through the whole guitar. The neck is pretty thin, and I prefer a thicker one, but I still love the way it feels and plays. It's smooth and worn in and the finger board is so rolled over it just feels perfect and comfortable even for a thin neck. It's safe to say this thing isn't going anywhere for a long time. Would love to find a brother for it, a same series '62 strat, maybe with a hard tail and solid colour. 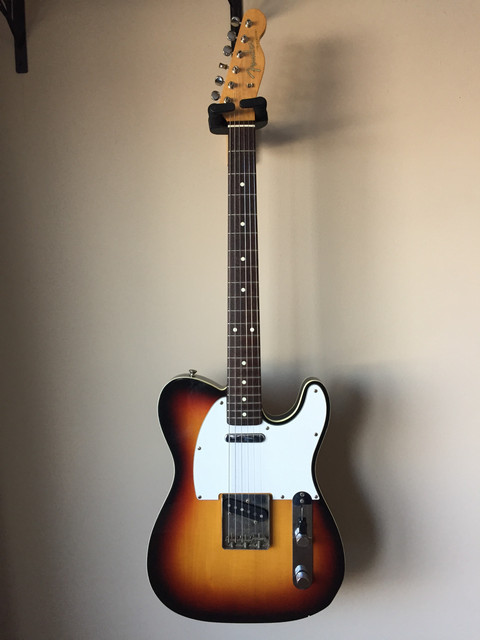 There are not best years. Fender Japan always made both high and entry level guitars. Even the "JV" strat could be great or cheap.
Here you can find some useful info: https://www.fuzzfaced.net/fender-made-in-japan-mij.html
Last edited: Sep 26, 2021

This is my ExTrad 57 Stratocaster: 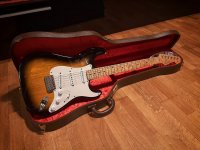 about 10 years ago, my brother was going back overseas to gig and he told me he really needed a strat, i had just got a line on a japanese strat for $175 dollars, i met the guy at the walmart parking lot when i was in town, deal took 5 minutes. i got home and sat down with it and... man! build quality, just feels as good as it gets. i was amazed. i think its an 82, blonde body rosewood board. i mentioned it to some guys and they said 'oh ya those early jap strats are killer' my bro still has it and loves it, and hes had a bunch of vintage stuff so he knows good stuff

I had a 1990 MIJ strat in black/rosewood. The switch broke almost immediately. I always like the neck on that one. I think some of the new soft V necks come close. Other than the neck, the rest of the guitar was nothing to get excited about. 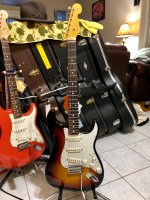 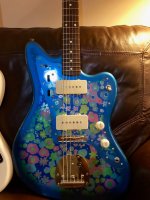 1984 MIJ '70s Squier Stratocaster in Oly White and "Crafted In Japan" 2010 Paisley Fender Stratocaster are awesome. They both got upgraded electronics. 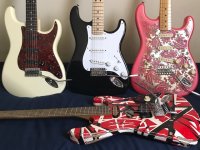 I have a MIJ Precision bass. Going by the serial number it was made sometime between 2007 and 2010. I bought it new sometime in 2010. Stellar bass with no dead spots anywhere. Played better than the MIA P basses I tried.

For some reason, I thought there was a late 80's series of guitars that came from Japan that were stellar? I could have been mistaken?:hank

akstrat61 said:
I remember hearing that there was a period of time in the 80's where the Fenders made in Japan where considered to be great guitars. Maybe it was a particular series?? Anyone care to shead some light on this topic? Maybe some examples/pics and why they were considered as such nice guitars?
Click to expand...

Well, back in '94, Guitarist magazine reviewed a Fender Japan '54 Reissue, and declared it was the best Strat Fender had ever made.
I own one. It isn't.
I've recently upgraded the hardware, pickups and electrics - Gotoh steel trem, as opposed to the cheap POS it had on it, custom made Radioshop pickups to replace the generic Japanese Strat-a-like pickups, Bareknuckles 280k pots and 0.1uF cap.
It's transformed it from a mediocre guitar, to a 'something special' guitar, but to be honest, if you want a Japanese Strat-a-like with vintage specs, get an early '80s Tokai. I also have one of those. Much better than the Japanese Fenders were.

There were a couple of years where Fender was having all their guitars made in Japan, while the Corona factory was being built - when FMIC bought from CBS, they got everything except the building,, so they had no production facility for a while 85/86/87, I think.

I have been partial to the E serialized FJ examples as they can offer a really good bang for the buck ratio.
Most of my E serialized are dated to 1987.
They are as good quality as the earlier JV examples but don't command the higher price point.
Try and stick with the minimum higher grade models, i.e. 70 and up, to make sure you getting alder bodies, instead of the lower grade stuff that can have basswood bodies.
Some of the production level grade 90 and above can be very good guitars and most will have 2 piece/center seam bodies like USA Custom Shop construction.
The Extrad, Custom Edition, and some of the ORDER MADE guitars are typically very good and again, the lower grade examples being the exceptions.
Most of these (that I owned) were produced through about 1994/1995 so, serial numbers up to about the S range.
I feel this is the peak of Fender Japan as I experienced it so, 1982 to 1995 is a pretty good run, IMO.
I have owned about 50 Fender Japan guitars over the course of about 3 decades and I still have a small hand full.
Only thing that I found lacking on FJ examples was they typically never really had thicker necks which is a shame.


K serial (circa 1990/1991) 'ORDER MADE' - super rare 'candy blue' with silver under coat, scalloped fingerboard, small head stock, brass nut, DiMarzio HS pups at the neck and bridge, no Malmsteen logo, 100% original, possibly a one off. I sold this one many years ago. 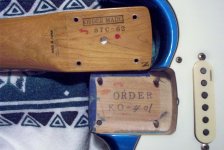 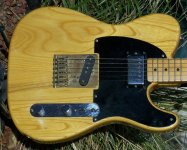 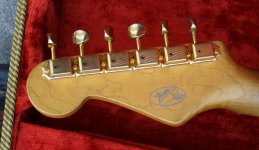 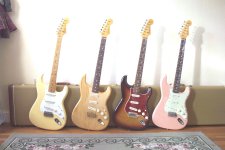 Center of photo - 'ORDER MADE' ST62 Candy Metallic green/silver under coat, w/gold hardware and Brazilian fingerboard from circa 1993
This is the ONE I should have kept = oops 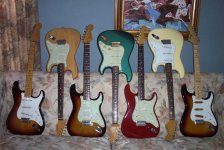 I have a 1985 MIJ Strat that has very worn frets. I've 'corrupted' it with an Antiquity pu and another pick guard over the years, losing its OE stigma.