Got a used CS Strat, accidentally broke off the trem bar in the block, so I've been looking into after market Trem Blocks. Looks like there is no consensus on whether or not CS uses a proprietary block or if they use the American Original block. Also appears that the Callaham block get a lot of high praise. Thinking about the Callaham, but the Strat I have is already pretty bright, which got me thinking about that element (uh-oh!). The guitars sounds über "strat-y" in a modern way, i.e, crisp but a little sterile. It's a 2010 with Abby wound P'ups, they seem well regarded enough, but are absolutely missing that warm and rounded top end that's bitey but not abrasive. Also the in between positions are a little undefined. YOu know, it lacks a lot of the vintage authenticity I like to hear, that pleasant top end that present but round, you know it when you hear it. My old pre CBS Jazzmaster has it in spades, this Strat doesn't. So, looking into pickups now too, so, oh jeez, here we go, should I even...? Anyway, I'm thinking a 50's style set might be what I'm looking for, less "Straty", ya know? I think Rocketfire 54's seem promising. Do I even ask if anyone has an thoughts? 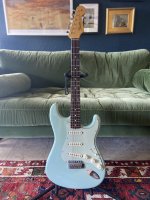 Rabbit Hole confirmed. Was there a question?

jb_abides said:
Rabbit Hole confirmed. Was there a question?
Click to expand...

Ha, kind of, you know. I guess questions would be: Does the Callaham block over brighten an already modern and bright sounding guitar, if I got that block would I be essentially forced down the pickup rabbit hole, should I just get an AO block and call it a day, and does anyone have direct experience with the Rocketfire pickups? You know, it's the chase that's the fun, once you have it all together, it's less fun than when you were trying to track down the exact recipe for that perfect sound...if you're lucky enough to ever even get there. So go for it! Opinions welcome!