Dragonkoi said:
I haven't even been in the same room as one. Not even the same postcode. I need Bonamassa to have a look at my shift pattern when he's planning his tours then maybe I might see one.
Click to expand...

what makes you think he doesnt already know your work shift schedule?

November 7, 1969. Saw the Rolling Stones perform @ Moby Gym, Colorado State University in Fort Collins Colorado. First time they played in the United States with Mick Taylor too. Didn't realize at the time what it was though.

First one I've played? Um ... that hasn't happened and probably never will. Seen and photographed (badly) a lot of them at guitar shows and in stores over the past 15+ years but the thought of holding something that valuable makes me terribly uncomfortable. Besides, playing such things is best left to proper guitarists. :hank

About the time I was in college, around 1990. My best friends brother in law was an attorney in Memphis, and a darn good player. We were visit during summer break and my pal asked if i wanted to see his brother in laws guitar? Not really knowing much about what it was, I soon found out. When he plugged it into that marshall half stack I was mesmerized. I hung to his brother in law from then on. Mike and I became good friends as he taught me a lot about vintage guitars. He taught his boys and their friends a lot about music, even started a band for them to keep them out of Memphis trouble. Hauling them around after work, hanging out with them and just being a great mentor. RIP Mike

Mike playing with neighborhood kids in their home basement.

I was friends with Jeff Adams when he acquired the guitar somewhere around 1980 give or take. I sent TW a couple of photo's a while back. I no longer have host for photos maybe TW will put them up.
J

The very first concert I went to was at CW Post College here on Long Island, NY. It was the first concert that Allman Bros played after Duane's death. Opening for them was Wet Willie. Ricky Hirsch played an amazing sounding burst through a Marshall stack. Some time after that, I was having some work done on a '69 LP Goldtop I had, at Sam Ash and the tech pulled out a '59 LP with an amazing top to show me. I didn't get to play it unfortunately. I've played a ton of vintage SG's, 335's, LP Specials, but no bursts.

I remember the first time I saw one. It was in the hands of Spencer Davis at the Big Apple club in Schwabing, Munich Germany in the summer of 1968.
The thing I remember about that gig is when somebody in the crowd shouted I’m A Man! Pete York shouted back quick as a whistle “Prove it!”

The first time I played one was the day I started working for de Forrest at Guitar Trader in 1979. We went upstairs at the old shop at 8 Broad Street and Dave lined up about 10 brown cases, each with a sunburst inside.

First one I saw was at a BAP concert in 1984, I was 16 then. Back then BAP was a popular german group and their guitarist Klaus "Major" Heuser had just aquired a Burst. I knew that because there were several books out about the group and in one it was mentioned that he acquired a Les Paul from 1959 (as they worded it, "burst" was not a common term in Germany back then).

First one I got to play was 1987 in Hamburg at No. 1 - even today one of the go-to shops for vintage guitars in Germany. I was on holiday after having just graduated from school and me and a friend got my dad's car and drove through the whole country. In Hamburg I decided to check out the new PRS guitars, which were all the hype back then. In the corner of the show-room there was a burst and I do remember the tag said "pre-owned by the Scorpions". Well it actually named the guitarist (Rudolf or Mathias) but I don't remember which one. I also remember the price was 12,500, but I don't remember the currency. Back then No. 1 had many foreign customers and they did price their stuff in German Mark and US-Dollar. So 12,500 Marks would be on the cheap side (roughly 7,000 US-Dollar back then), maybe it was 12,500 Dollar. But I honestly don't remember.

I always wondered what happened to that guitar. With that provenance you'd think it would have showed up somewhere in the last 32 years. But then, I remember I wasn't that excited about the guitar and there probably was a reason the Scorpions were selling it. They had several bursts and this one seems to be their least favorite, otherwise they wouldn't have sold it. I liked the PRS Custom 24 that I played in the shop before I grabbed the burst better back then. Oh well, little did I know. :laugh2:

I've seen Famous guitar players play on stage but I have held/ played (Unplugged) a 1954 Les Paul Custom (I absolutly loved it) and a 57 Les paul custom in Cherry (that they later reissued which is also on my wishlist) but i'd love to see one in person and see what all the hype is about them!!

P.S. I know this doesn't pertain to the thread but i thought i'd share!! Thanks!:dude:
B

Well I live in a small town in southern Minnesota,small locally owned music store here as well. I have been friends with Dave the repair/store manager here for decades.Great guy and he had some really awesome guitars............old Strats old Teles and more. There was a vintage "Burst" here in town that a guy bought back in the day and owned for years,he was a very good player. When he passed his family retained it,people knew about it but it was not for sale,least not for long time.At one point the son of the owner decided to let it go as it had become a VERY valuable guitar and my friend who ran that store bought it. I played it more than a few times and it was a amazing guitar,but just holding it thinking of what it was worth,whew! He later sold the guitar to SolidBody Guitars and from there it went over to England where it still resides. That guitar became known as "THE MINNESOTA BURST". The other "Burst" I got to play was again was owned by the same friend that had owned the Minnesota Burst. He found another here again in northern Minnesota............this one was a dark tobacco burst with a lot of wear and a cracked off neck PUP ring. That guitar had incredible patina from all the years of gigging, it played and sounded just beautiful,if I could have bought it I would have done so on the spot! It too was later sold to Mike Reader.I asked about it here on the LPF and someone found it as it was being sold on Ebay." Minnesota Burst"

and the" Dark Burst" 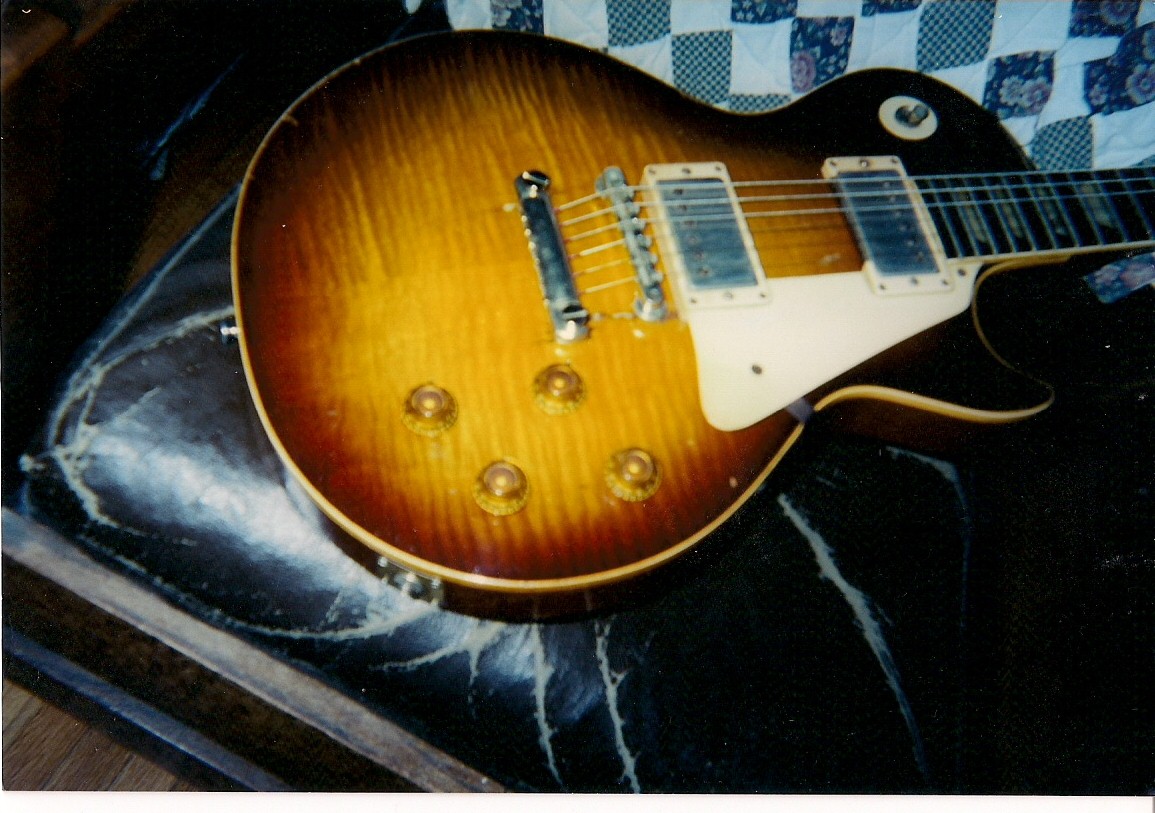 First 'Burst I played, courtesy of the owner, and organised by LPF member - Mick Taylor's Exile on Main Street. 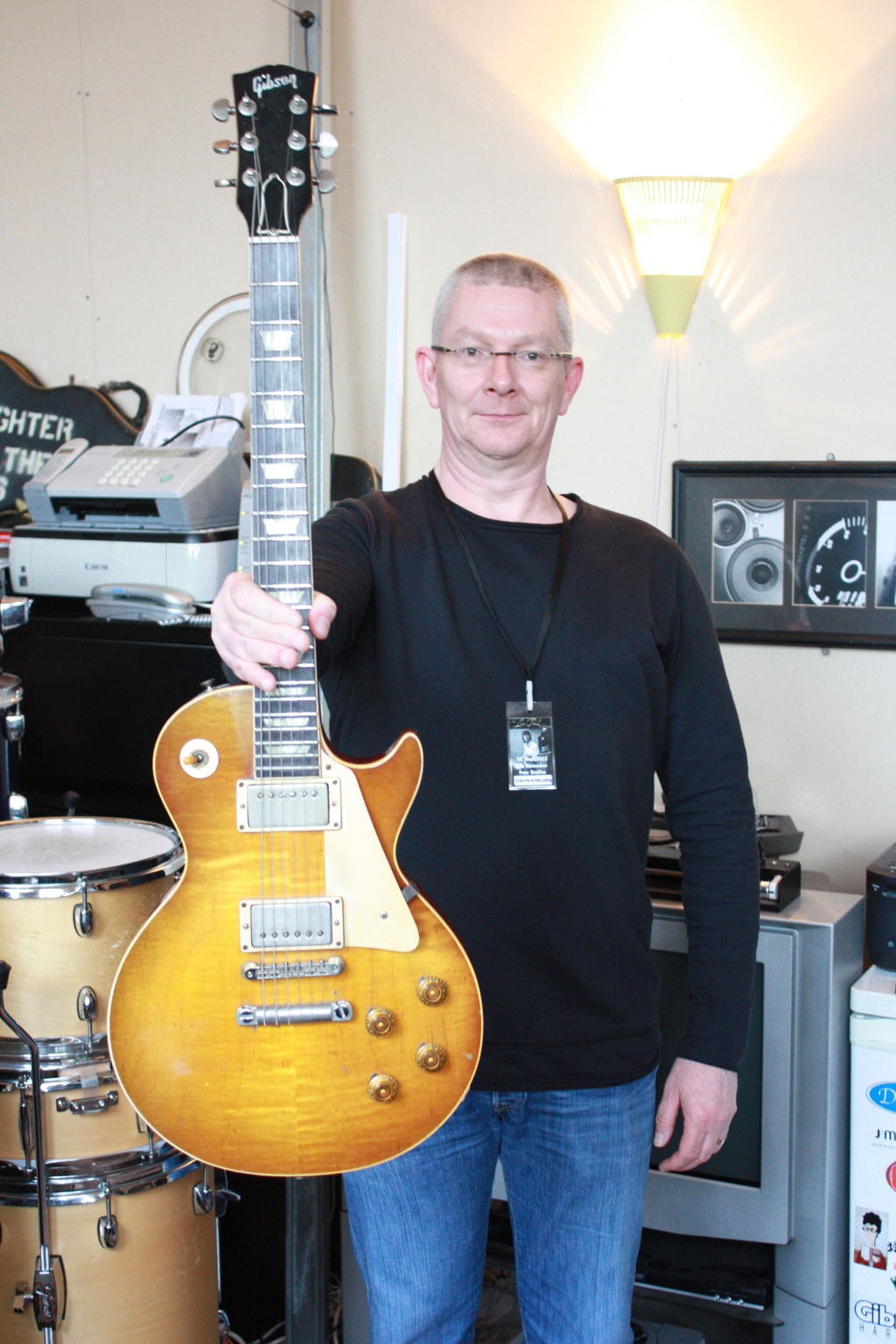 First couple I saw up close and played, were at Ax in Hand in '85-'86. I hung around there regularly, and Larry and Tom were both super nice about letting me play anything in the store, even though they knew I was a broke musician and student. Usually, it was one of them insisting I play something, rather than me asking. That was the case with the bursts.
They had a room in the house they were in that had all the 50's Les Pauls arrayed around the room on the wall, starting with '52 and going around, but there were no bursts on the wall. I had played a bunch of the goldtops, and really dug several of them, for different reasons.
I remember asking why they only had the green/gold ones, and that got a "look" from Larry, after which he said, "Come this way" as we walked into the room with the counter, followed by a "Wait here".

There was thunking and clunking, and he brought out some cases with bursts in them.

I tried them out, but I was honestly not very impressed. Both needed new strings badly, to the point where it was really kind of hard to get a feel for the guitar, and one of them needed a truss rod tweak, if not some intonation adjustments.

I've seen others up close since, but I am pretty sure those were the last I actually held and played.

I would have to thank Roger Crisler for letting me check out the first ‘59 I ever held and Bern for letting me play one of his live. Played a few since but those are my favorite memories.

First one for me was at Gruhn’s in the mid 80s. It was later sold to Hank Williams Jr and now owned by Greg Martin. Great experience although they wouldn’t let me play it without my parents coming with me. Next to it in the case was a lefty (which I didn’t attempt to play) now owned by Paul McCartney. Both could have been bought for $10k at the time.

I played a plain top 58 at Gruen around 2000. It didn't know any more songs than my own guitars.
A

gibson-r8 said:
I played a plain top 58 at Gruen around 2000. It didn't know any more songs than my own guitars.
Click to expand...

ha ha, i bought a (late) 47 d-28 from an old cowboy one time, i played it a bit and he said 'if ida known all those chords were on it i wouldnta sold it!'
then he said ' meet me out front by my garage' he had an amp he didnt use anymore said he would just give it to me...he came out with a mint 69 twin!!
he kept his old L5. he was one cool dude.
anywhoos i have some pics i,m going to look for of my first bursts to post
R

toxpert said:
Top shelf on display cabinet in music store. I was 5-6 years old at the time. That was in 1959.
What still resides in my memory was the bright red of the sunburst and the small body size.
:dude:
Click to expand...