latestarter said:
IS that a little bit of cherry poking out by the stud insert?
Click to expand...

latestarter said:
IS that a little bit of cherry poking out by the stud insert?
Click to expand... 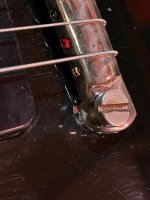 1957 I think was the best year for the Gibson Les Paul. It was the year the Les Paul exploded in popularity, and it was also year that the humbuckers were introduced by Gibson that same year.

Black is a good finish for a Les Paul. 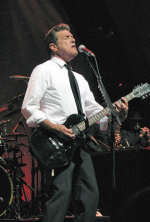 It is not sure whether this is a 1956 Gibson Les Paul Junior, or not. In this Gibson article, here is what they say about his 1950's Gibson Les Paul Junior. "But the guitar that most of us associate with Frey is his ‘50s Les Paul Junior nicknamed “Old Black.” The book, The Eagles FAQ: All That's Left to Know About Classic Rock's Superstars states that the guitar was a gift to Frey from longtime friend Jackson Browne. “Old Black” has been retrofitted with a P-90 in the neck position. During recent years, Frey has also been known to play a Sunburst Les Paul on stage." This same guitar is seen on the photos for Eagles Live and on the cover of No Fun Aloud, 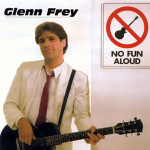