How about a little vintage Fender love?

Three13 said:
I'm 95% certain that the only Cimmaron Red guitar that I have seen (at least in color) is Leon McAuliffe's Fender Quad (which is a 1955, according to its owner):

The story I've heard is that there was some paint left after McAuliffe's steel was finished and Carson used it for his personal guitar, which may be the one used in Fender promo pictures (or maybe not - that guitar looks like a '56, based on the string tree, but the neck may have been swapped out). The Pee Wee Crayton guitar is a much brighter red than McAuliffe's - possibly Cadillac's Aztec Red or GMC Pimpernel Scarlet.

My guitar was painted gold, layered with clear nitro that was tinted with red printer's ink - sort of a proto Candy Apple Red. The paint was laid on gold/red/gold/red. The layers are pretty apparent if you look closely at the pictures. Interestingly, the bronzing powder in the gold paint oxidized (just like you see on a gold top or Eldon Shamblin's gold Strat) in spots where a lot of sweat got on the guitar; however, the oxidation reads black through the red top coat - there's a small area where it got scraped off and you can see the green underneath.

There's a green early '55 in the Galaxy of Strats that was painted this way, and Cal Green's '54 Strat (color unknown at this point) also appears to have a metallic sheen:

And of course there's the coolest 1954 ever - Eldon Shamblin's Strat:

leo did a white steel in 54 for bob wills steel player, they all stopped in ther'e tour bus to see Leo and all got white instruments that day including earl finley.
i have one of mcauliffs 3 necks, its never been played since it left his estate, he always added switches and stuff. i,m waiting to let jerry douglas or cindy cashdollar take it for a spin. it still is kind of in tune!
Last edited: Mar 24, 2021

This is my 1964 Strat. It has a very wide D-neck, transition logo, fiesta red over sunburst. I've had it since '99 and I've played hunderds of gigs with it. Nowadays it doesn't get much play time but I still love it and once in a while I'll channel some inner SRV and give it a rip. 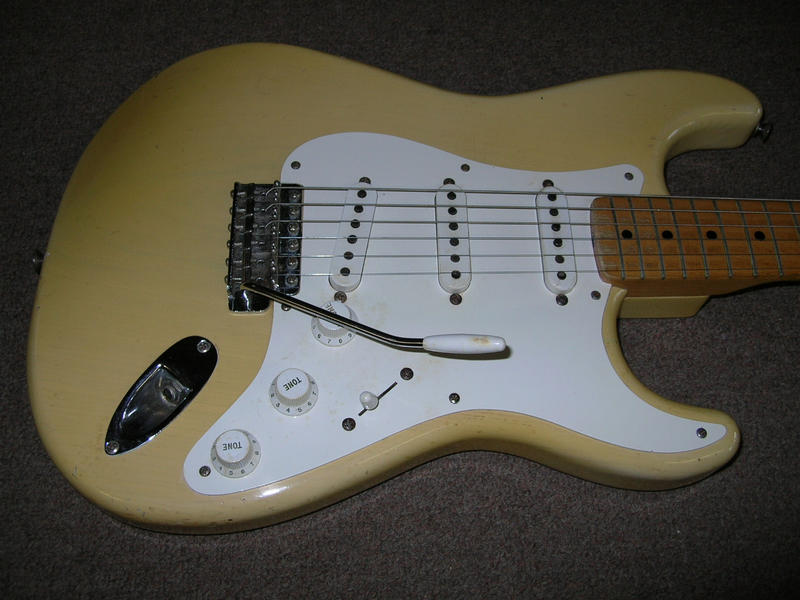 oh man. this got my attention. stellar. one on my dream list!
A 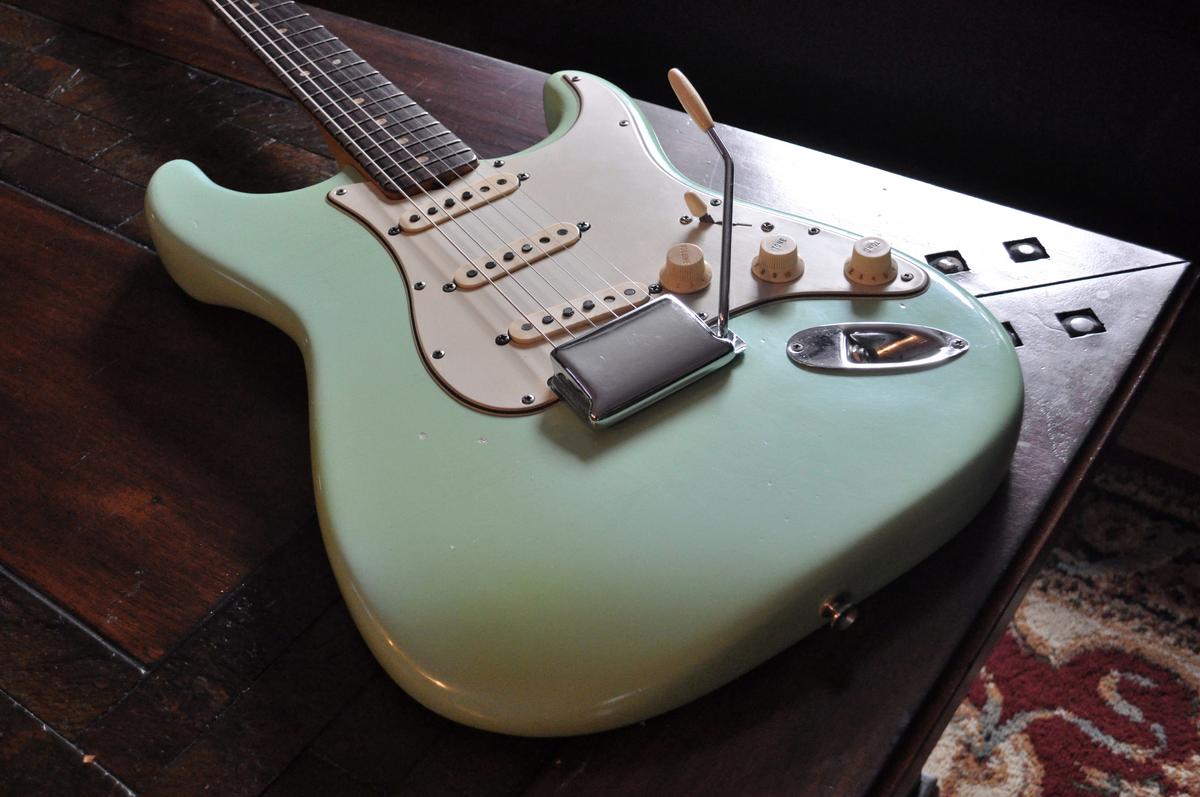 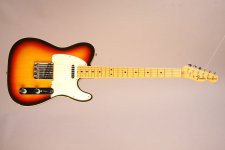 My 1969 Fender Double Bound Alder body Telecaster Custom in 3 tone Sunburst , with a 1 piece maple neck that believe it or not has a quite rather large neck . This guitar is hands down the best Fender that I have ever played in my life . Also ( not that it really shows in the images ) it has a rather nice flamey neck which I just love so much ! This instrument totally captures the Keef Richards sound for me and I just love it so much . Courtesy of Gruhn Guitars . P.S. this instrument is totally stock as it left Fullerton in 1969 , when I purchased this I had the fellas at Gruhn Guitars go over it with a fine tooth comb and microscope as I wanted to cross all my T's and dot my I's and they sure did and then some . Also it was a total pleasure meeting and shaking hands and speaking with Mr. Gruhn himself who I have looked up to and admired and respected since I was a kid reading Guitar Player magazine over 40 years ago and reading his columns there . Gruhn Guitars in Nashville sure is a fine shop with a great staff !
Last edited: Apr 1, 2021 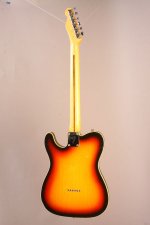 One image of her back side . This is such a fun instrument for me to play .

One more tid bit to share . I never ever thought I would get a vintage Fender Telecaster Custom , I just always assumed that it would be a Fender Custom Shop instrument . This one popped up on the radar in April of 2019 and I stalked it and watched it until early August 2019 when I had the funds to make the purchase . I was so lucky that it did not sell until I came a calling to give her a good home . I was told that it was part of an exhibit for Mr. Gruhn at Belmont University . Then I just wonder of it's history and lineage from Music Row in Nashville and ponder who played and recorded and toured with it . A mystery worthy of Lt. Columbo ! Also the other thing that is unique for me is that on my daily searches thru the various sites rarely do I ever see vintage maple neck Telecaster Customs pop up for sale , usually it's Rosewood board on Maple necks . Thankfully this one popped up and it waited for me .
A

man you scored a nice one! love the look of that, i dig standing and playing a tele custom,the squared off bound edges are so awesome they just have a cool overall feel. congrats!

agogetr said:
man you scored a nice one! love the look of that, i dig standing and playing a tele custom,the squared off bound edges are so awesome they just have a cool overall feel. congrats!
Click to expand...

This guitar is awesome . I just drool looking at it . Then plugging it in I totally get it . 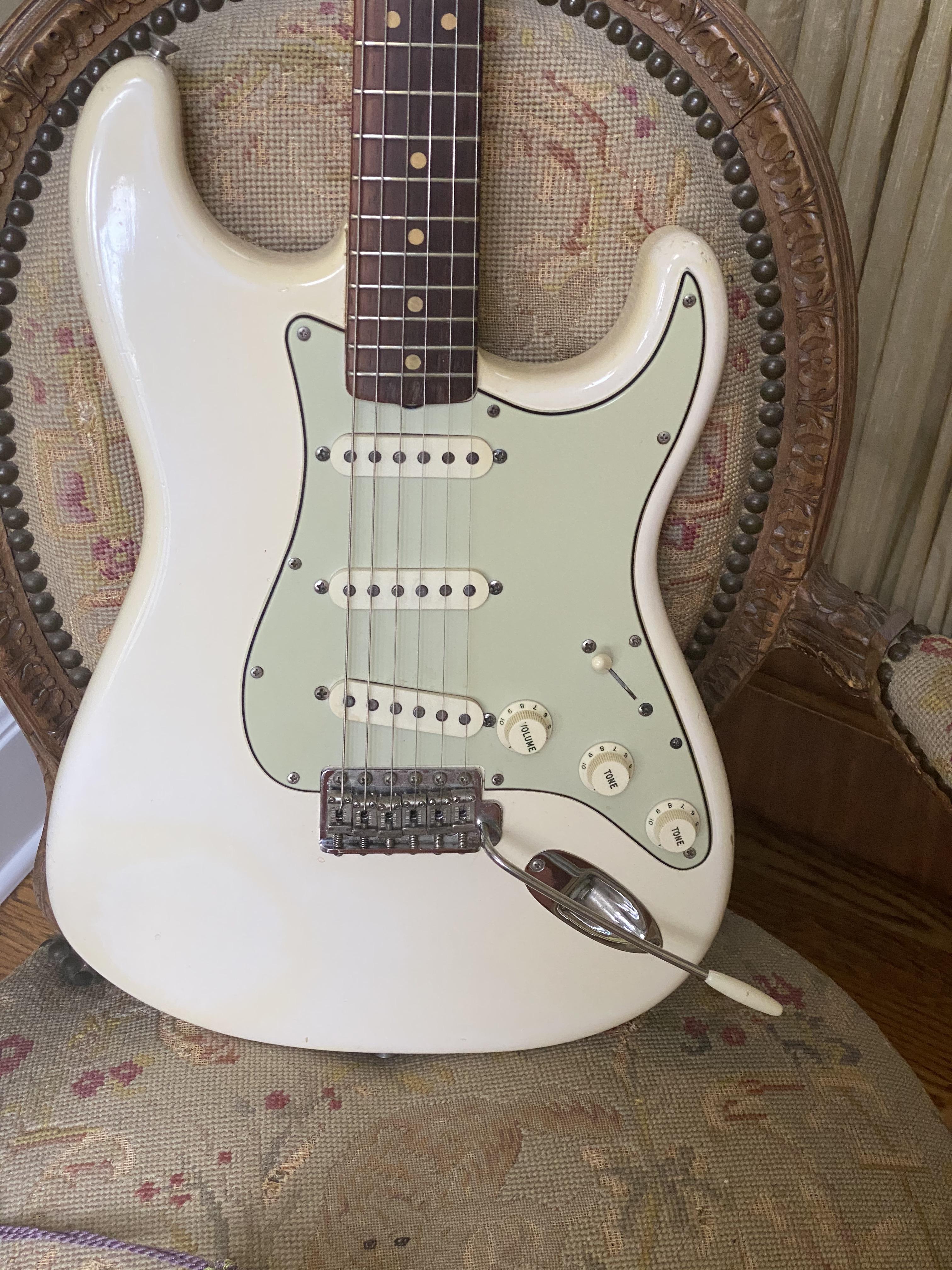 Killer guitars 57Gold and El G.
They dont make em like they used to love the 56 tele! that tweed case with the pale insides has to be a rare one. i,m guessin its a late 58 early 59 case? really cool
A 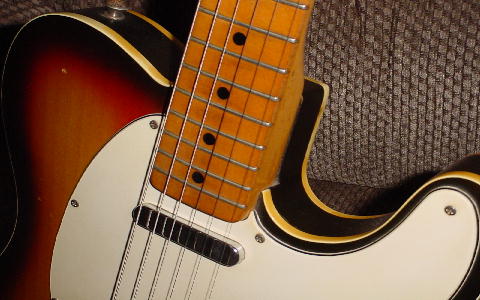 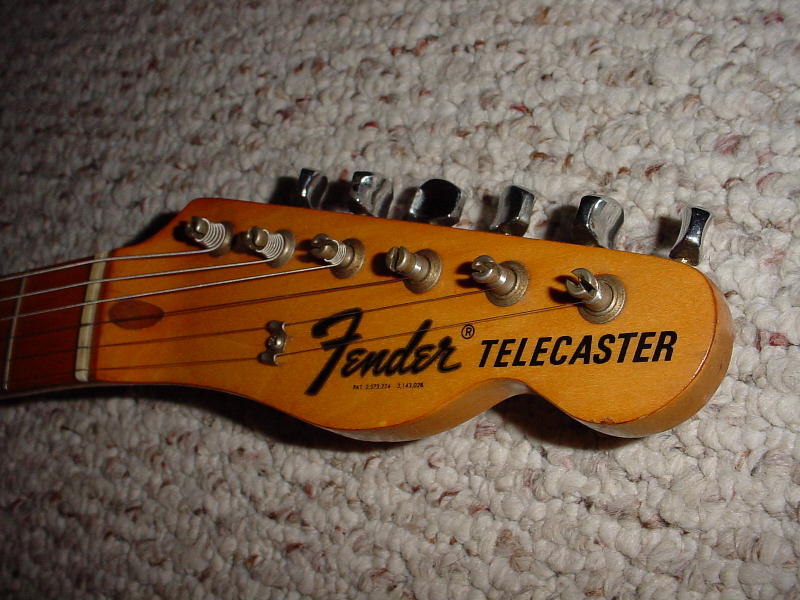 finally! a tele custom that just says 'telecaster' i have a 63 clean out of the estate this way, i have asked online a few times if anyone else has a regular tele decal on the're custom, anyone know why these are out there?
A

the bass player needs a gold guitar too! a little newer, its a 66 jazz..hey gold isnt easy to find!

agogetr said:
love the 56 tele! that tweed case with the pale insides has to be a rare one. i,m guessin its a late 58 early 59 case? really cool
Click to expand...

Not sure. Played the instrument and dug it, featherweight and deep V, cool figured neck. Left shop, flew home and negotiated price with dealer and asked about its case. He said it was original and was in good condition. So, I bought it.

A few days later the Tele shows up in a tweed case that is falling apart, ends torn off, didn't close properly, was held together by gaffers tape. Called and said I would send the instrument back for a refund due to misrepresentation of the case condition, so he sent me this replacement. Some have noticed that it held a Strat for most of its life. Not sure when it was made.

Do not know crap about Fender cases, but have a cool 1958 with a bronze Fender tag on outside and had early 1960s Strats with very cool brown and white with black ends. Now down to the 1958 and the Olympic White 1964 pictured above, and it has a kinda boring black case.
A

i love the old white strat cases with black ends. it seems like folks are starting to ask a lot for them.
id love to have an olympic white strat! yours looks pretty stellar

The tweed Tele / Strat cases with the orange lining seem to be typical for 1958 and 59. The odd 1960 could have been sold with one as well. (the earlier tweeds had red lining)

They went with the brown cases right after that; first with an orange lining, then with a more reddish color.

After that was the white case; and then the black.

fernieite said:
The tweed Tele / Strat cases with the orange lining seem to be typical for 1958 and 59. The odd 1960 could have been sold with one as well. (the earlier tweeds had red lining)

They went with the brown cases right after that; first with an orange lining, then with a more reddish color.

After that was the white case; and then the black.