I went to my grandmother's closet, and found a 1970 Les Paul Custom! Maybe I missed the deadline for this section by a year, but I thought I would ask the question: What should I do to ensure the guitar is playing well for a long time? Also, does anything look non-original? The frets seems to be fairly high for this kind of guitar. 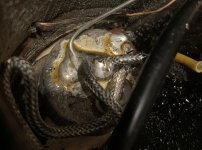 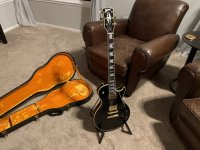 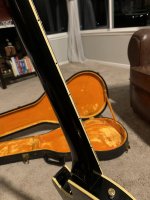 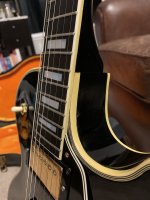 Looks like a refret because there are no nibs but anything goes with Gibson in that period. And yes, they are tall. Count your blessings!

Wow! A truly spectacular find. Congratulations! When you say that the pickups show the patent number, is it on a sticker or etched in the back? Either way, awesome guitar. Enjoy it! Here's a look at a 1970 Gibson Les Paul Custom I had.

Barn/closet finds are getting rarer each day. Consider yourself lucky and buy this book: https://www.amazon.com/Strat-Attic-Thrilling-Stories-Archaeology/dp/0760343853

TrueVintageGuitar said:
Wow! A truly spectacular find. Congratulations! When you say that the pickups show the patent number, is it on a sticker or etched in the back? Either way, awesome guitar. Enjoy it! Here's a look at a 1970 Gibson Les Paul Custom I had.
Click to expand...

It’s on a sticker that says “PATENT NO 2xxxxxx”

Update: I think I found the 'original' nut and 2 'original' frets in the case box. I think the guitar was re-fretted, and the luthier left a couple of the pieces around.

It is 100% sure refretted. As Bob Womack says, it should have fret nibs, if the frets were original. Also the frets that are on it now, are way too big to be original. The originals were the so called "fretless wonder" type. Low AND narrow. I find it how to say for certain from your photo of the frets found in the case pocked, if they are the originals, but I think they are. As a collectible the new frets will devalue the guitar. But as a player, most of us will by far prefer the new frets. Many (Including myself) strongly dislike the original frets.
You should btw have posted in the sunburst subforum, where your guitar belongs, as it is not 1969 or earlier.
You should try looking at the other pots in the guitar, to see if you can find the rest of the code. The code sholuld have 7 digits. The first digit is no doubt a 1, as 137 was the code for CTS, which is what Gibson used at the time. The 704 part of the code, means 1970(70) and week 4?. On your picture the last digit is covered by solder, but it might be readable on one of the other pots. If the week is late in the forties, like for instance 49, then I´d say, that the guitar is most likely a 1971 (Which would make no difference to me). I have seen several 1972 Les Pauls with purple lining in the case, so your case with the so called yellow lining (Looks orange to me) is earlier than 1972. You should in my opinion not date a Gibson from this period by serial no alone, they are not very reliable. If there is a conflict between serial no and the guitars features, I would always date by features.
Last edited: Apr 8, 2021

As has been mentioned, it's definitely been refretted, but no big deal.

If you don't work on your own guitars, take it to a qualified tech and have them give it the once over. Well worth it to do.

and play her in good health!

Congrats! Does it have a "Made in USA" stamp on the back of the headstock under the serial number?

Also, is there a volute (raised bump) on the back side of the neck close to the headstock?

The non-original frets devalue the guitar by precisely one dollar.