Trying to answer this question: When would the cutoff date have been between the 1973 and 1974 model year for a Les Paul Custom. I have a 73 Custom, serial # 113XXX. The pots date to the 48th week of November, 1973. I am trying to figure out if this guitar would have been sold as a 73 or a 74 model. The 74's have the Twentieth Anniversary Inlay and I am wondering if this guitar, built in late 73, would actually be an early 74 model without the inlay. I am wondering if there was even such a thing as a cutoff date back during that time period? Given the fact that Gibson lists serial numbers from 100000 - 199999 as being built from 1970 through 1975, is there a way to tell if mine is technically a 1974 just without the inlay. We all know how Gibson makes instrument changes on a whim, wondering if mine could be an Anniversary model. As always, any help is greatly appreciated.

I love threads like this. I have so much to learn and so many people here have such valuable information. I appreciate all of you guys.

73 serial means 73. Last ones finished end of December but would ship Janurary 74. Some mosty done but finished completion in Jan, that had been serial stamped in 73, would be finished and shipped in Jan 74 but are 73's for all intents and purposes. From Jan 1 those built would be 74's.

Changes in build would allways overlap, and some were implemented mid year. Serial # are not as easy to grasp in early 70's, as 50's or later 70's and onward would be, as they did not sequence from prior year. Pot codes and serial are reliable indicators. Build features can help.

The numbers were for internal inventory reasons. Production tallies and yearly totals. Nobody bought a 73 Les Paul, you bought a NEW Les Paul. The year it was bought became its yom to us back then.

Without the 20th Anniv. designation, it is probably not.
These late 1971 pot date guitars also 1971/72. Too late in the year to
be certain of ship date or completion. 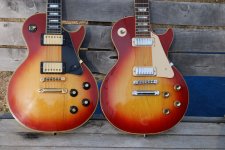 For whatever reason, I have seen more confusion through the years on dating 1972 to 1975 Les Paul Customs.

It is because Gibson's serial number systems were changed multiple times during that period and often overlapped or reused serials from other periods. It was serial number chaos.

YOM wasn't as big of a deal back then. Except for Martin, most USA companies just signed off on new sequences kinda at their own whim. Some better than others. As far as 70's Gibsons, I could care less and see no urgent reason to do so. Features are what matter to almost everyone I know. Sandwich body, three piece mahogany neck, abr1and double ring Klusons equals early 70's. Three piece Maple neck, sandwich body equals mid 70's as well as oval decal serial sticker. Maple neck, one piece body equals later 70's early 80's which have easy to date number. Impressed logo pup covers, engraved inlay or limited issue point to specific years and whether my 70's reissue Black Beauty early 50's Custom was a 71 or 72 or 73 was a non issue. But if it were a serial number check answers the question.


A guitar built in 71, shipped in 72 and bought new in 73 could be thought of as a 73 by the buyer. "Yup, bought that baby new in 73." Understandable given the mindset of a land long ago and far away. Wrong but understandale.

In my case, I was mainly after a Kalamazoo made LPC. I bought it from a reputable dealer as a ‘72, it ended up being a late ‘74 or possibly early ‘75. It was still a Kalamazoo made guitar……….

As far as the “Twentieth Anniversary” inlay on 1974 Les Paul Customs, not all of them have that inlay. I have a 1974 LPC without the anniversary inlay.

Thanks everyone. Wiring channel is the upper part of the cavity. Going with 1974.
W

From the inception of the six digit serial numbers circa late 1962-early 1962, there are many instances where the ‘tells’ are 8n the details; and there are situations where one simply cannot know with any certainty which year a guitar’s producti9n date falls 8n…such as @Coachmoe asks about here.
My 1966 ES-345, purchased by me new in June of 1967, has a serial number that can date a Gibson to 1966, 1969, 1973, 1974, or 1975. It is easy to tell by the details what year it is…..even if I had not been the original owner. I had a 1970’s ES-345 that could not be narrowed down any closer than 1973 or 1974. And….in that case and the case of the guitar being questioned in this thread, it matters not with regard to value. Now, if someone was trying to pass a 1975 ES345 as a 1966 ES345, that would be of some monetary concern, ime.
You must log in or register to reply here.
Share:
Facebook Twitter Reddit Pinterest Tumblr WhatsApp Email Share Link
Top