Early Silverface Deluxe Reverb Amp with AB763 circuit and original footswitch. Put a Mullards in V1 and V2 and it's unbelievably great sounding with my Gretsch. I haven't tried the Gibsons yet.
All original except 3 prong cord. Nothing except the two tubes has been changed yet. Nothing. It still has vintage RCA 6v6s which may be original.
Runs very quiet, even cranked all the way up you can barely hear it.

Nice!! Would love to add a drip edge Deluxe to my "couple" collection!?
W

I miss my SF. In the search for "better" I sold it. A great amp. Great vibrato. Perfect size for the modern gig- small to medium. Rich tone-the clean is spectacular and complex. Takes pedals very well. I never drove it loud enough to get it "dirty"- mine stayed clean very loud. Important to have the filter caps checked- and if original- replaced. Great amp.
And RCA's are more original than mullards.

I have the same one. Love it. Congrats!!
W

A young fellow I have known for a couple of decades..since he was maybe 16...was playing guitar for a lady out of Austin just s few years back. She had a job at the big rodeo in Houston....Astrodome. Jeff did not inquire but took it for granted the gig was for a 'side room'. NO, he played the Astrodome arena with his BFDR. Whadahey, right? IN a large venue, they are going to mic any amp on stage....tiny or huge. I did a 5F1 for a another fellow, who happened to be from the same hometown as Jeff---that being Snyder, TX. The owner of that 5F1 played Billy bob's, the world's largest dance hall, with that tweed Champ, I had built a l ineout place in the hole a 'friend' had put in that chromed chassis while he had it on loan.
I do understand the 'just an amp' situation, though, corpse. The venue can dictate the amp in such a case. Large amps may actually be more limited in the appropriateness of the amp-to-venue equation than small amps...unless one likes to restrict a large amp's output in some way....or if one is looking for nothing but clean out of the basic amplifier platform.

My favorite amp! I'm not fond of the original speaker though. I like to play them at about seven on the volume knob. It seems the old Oxfords are not up to the task. They sound okay at lower volume. 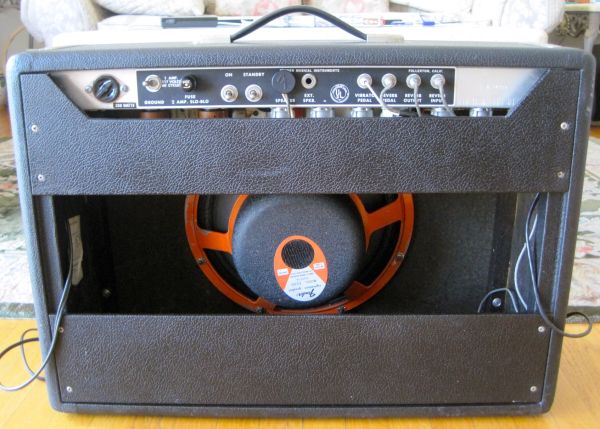 I had a Warehouse C12 in mine.

Lots of people with good speaker choice. I like Webers version of the p12N