Just unboxed. Hope she sounds as pretty as she looks!

No dealers in FL so had to buy one to try one. Gator of course! 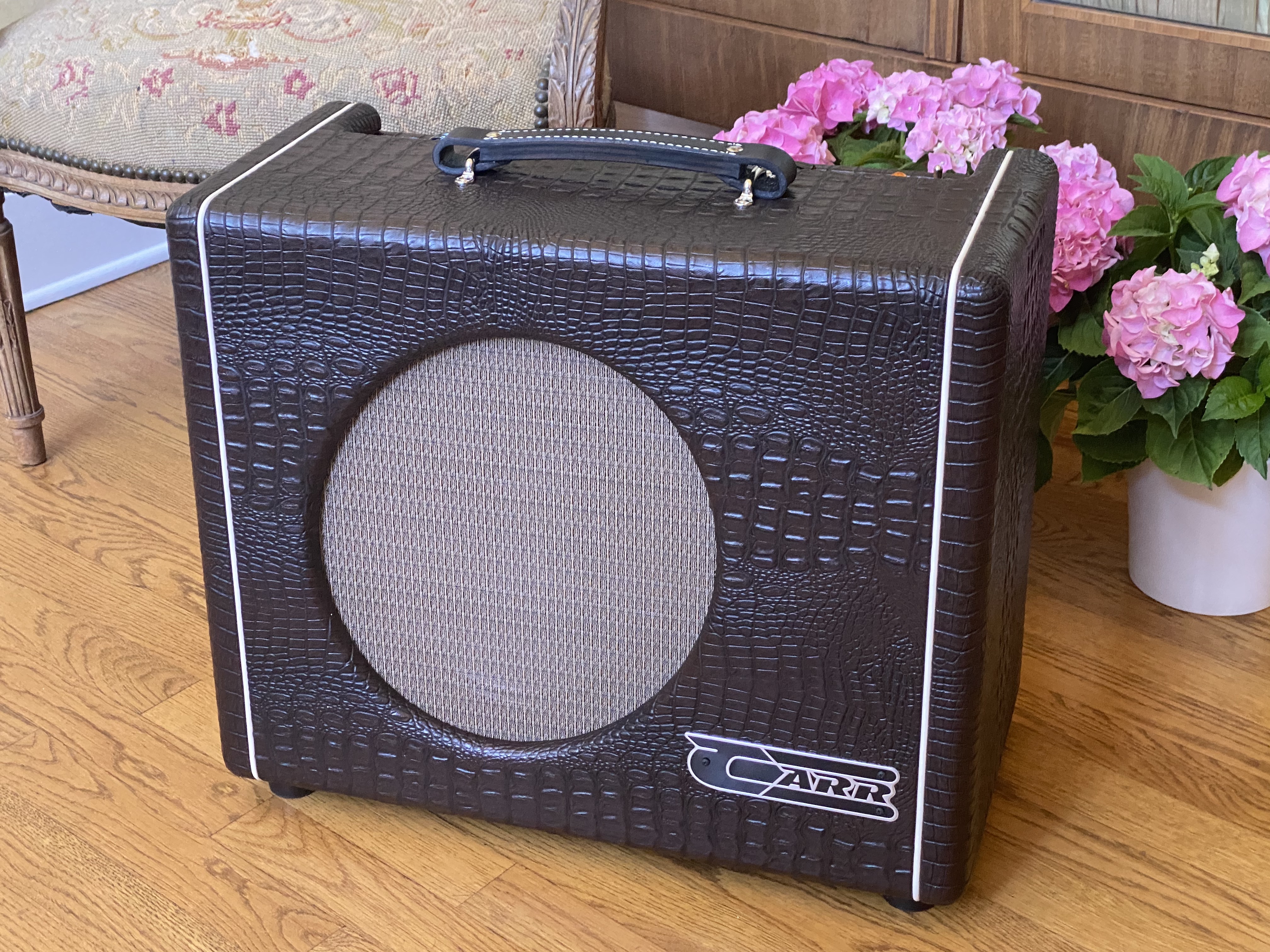 Congrats, I have a feeling that you're going to love it. I'm a big fan of Carr amps and I used to own one of the original single ended 8 watt Mercury amps. I've since bought a Rambler and an Impala and I'd like to get a Mercury V.

Post your thoughts after you've spent some time with it.

I've got an old Merc and a Rambler. The Merc is a lot of fun and the Rambler is one of the best amps that I have ever owned.

Love mine! Hope you're feeling the same.

Congrats....now take that new Carr for a drive!

Played out with it at a local blues jam a couple of nights.

First night with a Collings CL with Throbaks, sounded and felt great. Set up to emulate a 66 JTM45 I own when it is set at a juicy fat break up when guitar volume is up. Merc V did a great job at that. Had to turn down Treble to moderate some harshness, that may be caused by new speakers not broken in.

Second night, played a sweet JG Astrocaster that keeps up tonally with my 1957 and 1958 Strats, but plays better. Dialed it and Merc V in nicely at home, but was less successful in the bar setting. Had a TC chorus on pedalboard that I did not use at home that may have altered EQ? However, another player with an Ephphone with mini HBs plugged into it for a set and with a slight boost from a Mythos klone got some pretty righteous tones, think Johnny Winter And Live.

Very sensitive piece of gear with a bunch of controllable factors in terms of gain and EQ. Have some NOS Visseaux 6V6s and a Bugle Boy and a couple of Mullards, as well, which sweetened it up a bunch. A bit disappointed in its MV / attenuator, it is not for playing out as the drop from no attenuation to minimum is huge. It is for home/studio folks I am told. Would rather have a 10 watt starting point than a 4 watt one.

I can see why the attenuator might disappoint in the club setting.

In general I dislike attenuators and head more towards load boxes as they give more control.

As you stated it does cut is a bunch at first which is why I like it for the home studio scenario.

You can get those great pumped settings at a low volume level.

And I have always felt that Carr's in general are a slight bit harsher than I like.

That said, I love the amp and the attenuator IS miles ahead of many I have.

I also cheat and send the speakers through the board when the attenuator is thrown to get around the 'not quite right' feeling when cobbing the settings but not moving the cones enough...

renderit said:
I also cheat and send the speakers through the board when the attenuator is thrown to get around the 'not quite right' feeling when cobbing the settings but not moving the cones enough...
Click to expand...

I had a Carr Mercury. Never found the magic and sold it. But many people rave over them, so maybe I'm just weird.

MikeSlub said:
I had a Carr Mercury. Never found the magic and sold it. But many people rave over them, so maybe I'm just weird.
Click to expand...

Pretty sure we all have amps that either do or don't for us.
I've got the Marshall 1973X 2x12 that I swore was going to be the be all and end all of 2x12s that I've had over the years, only two came into the country back in the day and they were NZ$6k each new so waited for around 4-5 years and one of them finally came up on our local auction site for sale at very reasonable dollars. However compared to the 1x12 1974X it's not as focused in the sound and certainly blew away my theory that 2x12s were better soundwise than 1x12s.

Congrats, I continue to love mine. I found the mid eq hump a bit too pronounced with the stock power tubes (tungsol) but that seemed to lessen with a switch to JJ’s. I use it for my dry sound in a wet/dry rig when I gig. My main complaint about the attenuator is at home I have to fiddle around trying to get it low enough. The sweet spot for me is right on that edge before it cuts the sound completely. I wish it had just a bit more range on the quiet end. I rarely get to run it unattenuated, even onstage but it sounds great at all volumes.