So- I crossed off a bucket list guitar the other day. Please welcome this gorgeous and original 1953 Les Paul Standard 'Goldtop' to my little stable!

It's a later serial for '53 (3 2390) and as such, has all the '54 features that you want in a wraptail goldtop and as a little bonus, this particular example is nice and light weight.

This particular guitar was purchased in 2000 off the wall at Guitar Centre and brought to Melbourne where it has lived at a mastering studio ever since.

It's pretty rare for guitars like this to become available in Australia, so when this one popped up the first time in a store, I jumped at the opportunity to go and see what all the fuss was about with these!

I fell in love, but didn't have the money at the time so I accepted that it wasn't going to happen and moved on.

A year and a half later, and I found out that my friend Joel (@joelsvintage) had been working on the guitar and had managed to snap it up! On his way back up to Sydney, he stopped over and I got to see the old girl one more time.

I must have looked pretty sore on its way out because not long afterwards, (and with some financial gymnastics) we worked out a deal and after a little while it made its way back from vacation, back to Melbourne.

It sounds amazing in all positions but the neck pickup in particular blows everything else I have out of the water. Every note is rich, full and exciting. 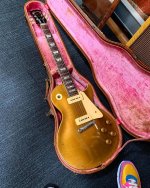 Congrats on a beautiful Goldtop! They are amazing guitars, enjoy her to the fullest.

Congrats, it's a lovely lester! You can almost see from the way it looks, that it will sound amazing.

Oh man, that’s some sweet mojo. I love it. Congrats.

Congrats! Getting my '55 was a life changing event, I hope you'll get the same experience

Congrats on the Lester! Love your tennis shoes! I have a couple of custom made Chuck Taylor’s(Converse) That are colorful.

Congratulations. That is beautiful. I have an early '53 (with trap). They are amazing.

Strong pickups, it's a trifecta!

Congrats on the score.

I saw the video Joel did on Facebook with this guitar and wondered where it got to. Congrats, great to see it stayed in Oz. Enjoy
S

Rarity for Oz, did you know there's also a 59 here as well?