Olivia Rodrigo plagiarizes every female pop singer in the world, and gets away with it!

Originally posted on the Guardian: https://www.theguardian.com/music/2...sed-of-plagiarism-by-courtney-love-and-others

Olivia Rodrigo accused of plagiarism by Courtney Love and others​

This article is more than 4 months old
Artwork for Sour Prom, which has similarities to Hole album Live Through This, criticised as ‘rude’ and ‘bad form’ by Love 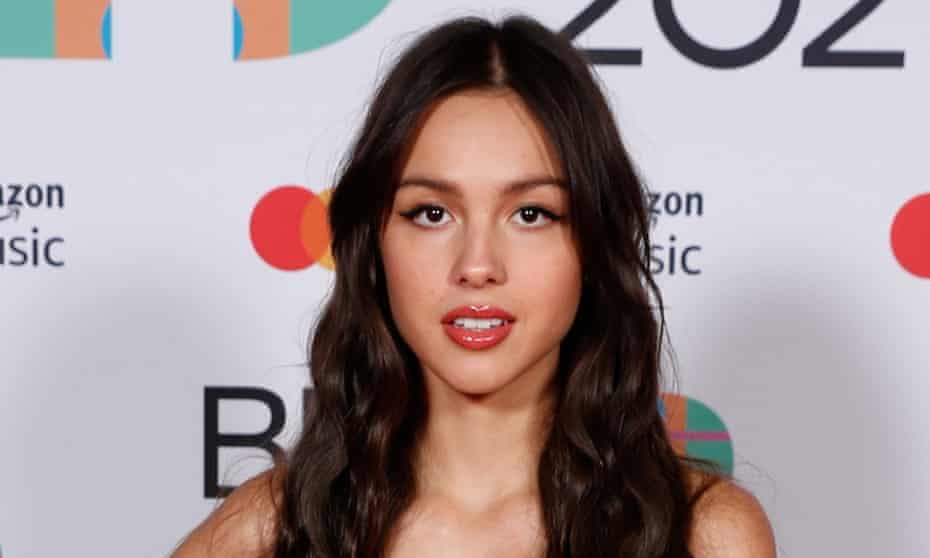 Olivia Rodrigo has been accused by Courtney Love and others of plagiarism in her artwork and a music video.
Love highlighted similarities between the album cover to Live Through This by her band Hole, photographed by Ellen von Unwerth, and the image used to promote Sour Prom, an Olivia Rodrigo concert film airing on 29 June. Each image features a prom queen in a tiara holding flowers, wearing smeared mascara. Love posted the Sour Prom artwork to Instagram with the caption “Spot the Difference! #twinning”, and later wrote on Facebook: “Stealing an original idea and not asking permission is rude. There’s no way to be elegant about it. I’m not angry. It happens all the time to me. But this was bad form.”

Olivia Rodrigo’s new promo pics are giving me very much Hole’s Live Through This album cover and I’m here for it!<3 pic.twitter.com/ER33Co9N2A
— Annette❣︎ (@annettelourdess) June 25, 2021
Click to expand...

Rodrigo wrote as a comment to the original post: “love u and live through this sooooo much”.

Olivia Rodrigo: ‘I’m a teenage girl. I feel heartbreak and longing really intensely’
Read more
The accusation follows another last week, where users on TikTok and Twitter drew comparisons between Rodrigo’s artwork and video for her No 1 single Good 4 U and the aesthetic used by US indie-rock band Pom Pom Squad. Both Rodrigo and the band’s frontwoman Mia Berrin are pictured wearing cheerleader outfits with long latex gloves, among other similarities.

Rodrigo has not responded to the latter comments. The Guardian has requested comment.
Rodrigo is 2021’s biggest breakthrough pop star, whose debut album Sour has topped charts in the UK and US. Pop-punk track Good 4 U is currently in its fifth week at No 1 in the UK singles chart, the longest-running rock chart-topper since Babylon Zoo’s Spaceman in 1996. Debut single Drivers License spent nine weeks at No 1 earlier this year, and two other songs, Deja Vu and Traitor, have also reached the UK Top 5.
To be honest, I don't get the hype about Olivia Rodrigo. Her songwriting, singing and acting is great yes. But she copies too much Lorde and Taylor Swift. I mean, one of her songs samples the piano riff from New Year's Day, for Christ sake. And I can understand Courtney accusing Olivia of plagiarism, but I mean. Cut her some slack. She's not even 30 yet.

That guardian review is comical, after a quick listen, the songs use just about every modern production cliche. I really dislike the sound od modern recordings.

The way she sings/vocal processing is also something that grates. So this is what kids have to look forward to? As for the plagiarism accusation, who really cares, its not like ahe's ripping off some great art works, Hole? ffs.

Courtney Love has also claimed that Lorde is one of her new favorite singers.

To be fair, the prom queen with smeared lipstick wasn't first used by Hole anyway...

Haven’t heard of her so it must be paying off really well.

jrgtr42 said:
To be fair, the prom queen with smeared lipstick wasn't first used by Hole anyway...
Click to expand...

Ya I never heard of her either. But I live in a cave.
Unless there's any talent in there at all, she'll just fade away like the rest of them.

On the other hand, at least Olivia got a Grammy nom. Hope she wins

Who gives a f*** what Courtney (what was her name again?) thinks?

In the end, it is probably good publicity for both of them.

If it wasn't for who she married, Courtney would be serving burgers or drinks somewhere.

mdubya said:
If it wasn't for who she married, Courtney would be serving burgers or drinks somewhere.
Click to expand...

Courtney was actually an actress and a founding member of Faith No More well before she married Kurt. She was in the movie Straight To Hell alongside Elvis Costello and former Clash front man Joe Strummer.

Ivan May said:
Courtney was actually an actress and a founding member of Faith No More well before she married Kurt. She was in the movie Straight To Hell alongside Elvis Costello and former Clash front man Joe Strummer.
Click to expand...

Some new artists it seems that its more important how "cute" they are and how well they dance....than how good their music is...

Hole had some really good songs IMHO, am I alone here?
D

I used to dig that song Malibu, not bad.
D

Olivia Rodrigo is a Disney product, so yes it's in the corporate DNA. If you have a song, media, idea they want, they're going to get it, period. It's sad but true.