I recently bought a gibson custom limit edition flying v. The headstock is 3pc. One of the seam lines looks very deep. I would like to know whether it is acceptable/normal or something not right.
Many thanks

Here is the pic. 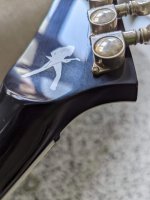 Welcome to the Forum ! Keep it play the crap out of it !

@Possessed ............ I would be interested to know what year production that guitar is? Thanks


EDIT: Just did an online search and that must be the DM Flying V, released December, 2021; amIrite?

if that guitar was produced within the past 1 to 2 years then the QC is typical Gibson aka crap.
The join either did not have enuff glue and/or one or both of the two joined pieces were not planed at the correct 90 degree angle.
Not surprising coming from Gibson as their QC is notorious for being crap.

It won't effect the instrument structurally but is a cosmetic issue.
None the less that example should have been destroyed, offered to a charity at no co$tS, or marked as a 2nd and sold at 60% off MSRP.