Brian Jones and his wonderful Gretsch

I can't believe nobody's posted on here about Brian Jones Gretsch. It is a 1963 Gretsch 6118 Anniversary guitar, and along with a Goldtop Gibson Les Paul and the Vox 12 string electric guitar, it became one of the standards in Brian Jones guitar rig during his tenure from 1966 up until his untimely death in 1969. 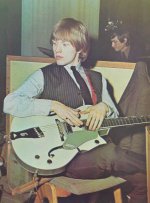 It is a wonderful hollowbody electric guitar, and one of the crown jewels of Brian Jones R&B inflected guitar solos. I think his guitar playing was just as important to the Stones as Keef and Ronnie Wood. Check out Brian's slide guitar solo on Little Red Rooster.
Both the Vox 12 string and the Goldtop were auctioned off recently for $75,000, and I wouldn't be surprised if this Gretsch was auctioned off too. I've always wondered about this Gretsch.

It is also proof that the Beatles weren't the only British band to play Gretsch (as we all know, Joe Walsh gave Pete Townshend an orange Gretsch that was used throughout the Who's Next sessions), and of course we all know that John Lennon played a Gretsch 6120 and that George Harrison played various Gretches, including a Gretsch Duo Jet, a Gretsch Country Gentleman, a Gretsch Tennesseean, and a Gretsch White Falcon.

Brian used the Gretsch most notably on the track I Wanna Be Your Man (which was written for the Stones by their rivals John Lennon and Paul McCartney).
Brian also played the sitar on Paint It Black, the harmonica on Not Fade Away, the piano and woodwinds on Ruby Tuesday, and the marimba on Under My Thumb. Shows how impressive his skills were, weren't they? His guitar solos on Sympathy For The DEvil are also very good (where he trades his licks with Keith Richards).

I hope that the kind people at the Les Paul Forum appreciate this post. It is also proof, sadly, that some of the greatest rock stars, especially Brian Jones, have to die at age 27. I think I'm gonna buy a Gretsch one day, to prove the influence Brian Jones has on so many musicians.

For the first couple of years the Stones were bashing away on some fairly ordinary guitars — mostly from the Harmony range (often seen as the poor man’s Gibson, Fender or Gretsch). However soon after the Stones recorded their first single, "Come On", in May of 1964, Brian Jones went to Sound City in London to upgrade.
Ronnie Wood played a 1957 Gretsch White Falcon a few times in 1981, whereas Mick Taylor always played a Gibson Les Paul during his tenure in the Stones.

I don't think Brian played much of anything on Beggars Banquet- the story was they stuck him in a closet with the tape machines off.
To be honest it is my long-held opinion that the first part of the Sympathy studio track is Keith and the second part is Jimmy Page.
Last edited: Mar 16, 2022

He played slide on No Expectations - his last but no means least contribution to the Stones' repertoire.

I would love to buy this Brand New Cadillac Green "'59 ," currently on Reverb

Reverb is a marketplace bringing together a wide-spanning community to buy, sell, and discuss all things music gear.

I've spent too much lately and have some expensive dental work getting done so I'll hold off.

I think Gretsch are fantastic and some of the vintage available are maybe the best deals.

IMMUSICRULZ said:
His guitar solos on Sympathy For The DEvil are also very good (where he trades his licks with Keith Richards).
Click to expand...

He doesn't play a single note on Sympathy for the devil. The recording of that one is pretty well documented by Jean-Luc Godard and it's all Nicky Hopkins on piano, Keith on Bass and Guitar and a couple of girlfriends and groupies on "Whoo Whoo".

The solo is all Keith with his LP Custom and a Vox transistor amp.

Always liked Keith's bass line on Sympathy. I think it is the only bass line I can play well on a bass guitar. Then one day Ronnie Wood joined the band and was never heard from again I've tried playing a Gretsch and just could not get the right tone from them, and I admire those that can. They are very cool.

Lou Reed and his 1964 Country Gentleman 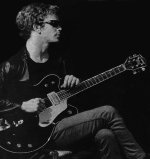 Brian was a very talented A-hole.. from what Ive heard Mick and Charlie say.

At least three of them were/are "talented a holes."

After Brian was gone, I never bought another Stones album--not because I didn't love many later songs, but because the uniqueness seemed to vanish.

corpse said:
...and the second part is Jimmy Page.
Click to expand...

rialcnis said:
At least three of them were/are "talented a holes."

After Brian was gone, I never bought another Stones album--not because I didn't love many later songs, but because the uniqueness seemed to vanish.
Click to expand...

I thought the Ya-Ya's LP was brilliant despite the absence of Mr. Jones, after that it predictably went downhill

Arnold M. said:
I thought the Ya-Ya's LP was brilliant despite the absence of Mr. Jones, after that it predictably went downhill
Click to expand... 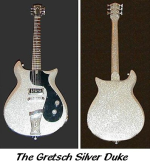 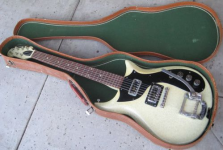 if I didn't like Mick Taylor why would I have said that the Ya-Ya's album was brilliant ???

A 1966 Gretsch "Gold Duke" even rarer than the Silver Duke. 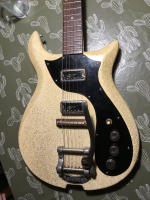 I've never played a Gretsch. Never had the opportunity. Would love to try a hollow bodied Gretsch.

This was my favorite Gretsch. I don't know if that was vintage or a reissue 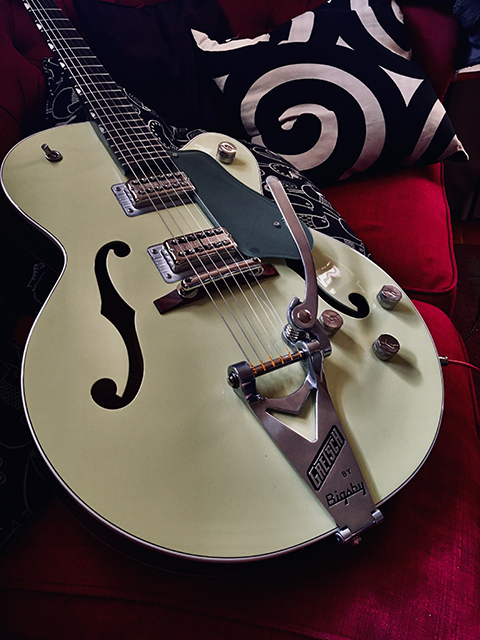 Here's my Gretsch Double Anniversary like Brian's, although mine's the 6118T SGR Players model which means it has Bigsby, and I swapped the roller bridge for a titanium bar bridge which sounds so much better than the stock bridge. It also has a tone control instead of a mud switch (the top rear switch on Brian's which is where his right thumb is in the picture above) making it much more versatile! It's a twanger, but I love the crunch tone this guitar gets when you wind it up (@1:16 in the song below) very Townsend like...