My xmas present, to myself

I hope this in the right place,
It's been a strange year, and until very recently I thought I'd been good, only had one new guitar that I picked up in Feb, a build I commissioned and that took a year, that was a great experience and I guess I was happy with that, anyhoo, I started a music degree in Sep, a lifelong ambition, and thought I'd treat myself to something light to carry to class, so I scored a 2013 SGJ, which turned out really nice after I put new pots,pickups,tuners,pickguard,,basically everything-- sounds and feels really good now, and I thought that was that, still haven't solved the neck dive though, so, as I'd been a good boy all year I thought what the heck, I'll treat myself for Xmas, so I saw this, 2015 Les Paul CM, robotuners, a junior with a carved maple top and a humbucker, something I wanted to try out for a while.
It arrived yesterday, and was fantastic out the box, think it was a return,for some reason, but I couldn't find anything wrong with it, except the strings were too light, I think Gibson use 9s.
So I raided my parts box and got tweaking.

I put a black Wilkinson wraptail on, which just looks better,and feels a little better quality, and then I thought, F### it, I always wanted to try an EVH Frankenstein in a Lester, and I had a spare DMC cover, the robot tuners work well for now, so, gentlemen, let me introduce--
Black Frank,
A fender pickup in a Gibson, a junior , a tribute to Mr Ed.
And I managed to post this,from my phone, after not using Photobucket for far too long.
This proves-- Next year--anything's possible.
Cheers guys
Andy k

That guitar looks like it would pretty stout, with a lot of sustain. Does it sound that way to you? And hey, those robot tuners, are they a PITA? Never played a guitar with them, I'm just curious.

Cool guitar, I would love that setup in a DC! 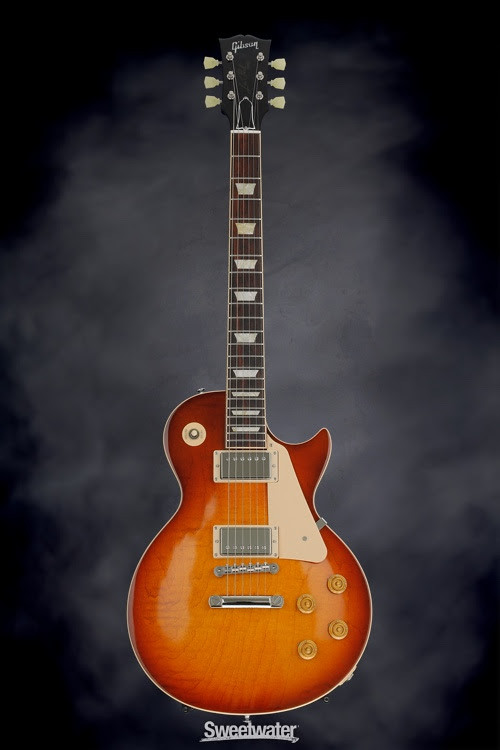 A couple ofweeks ago I ran across this video and fell in love.

I bought an ES Les Paul two years ago and while a great guitar, it's closer to a small ES 335 than a solid body Les Paul. When I found out they made a non f hole version (like Lucille) I had to have it. When I found out there were only 100 in the US I panicked. Grabbed the last one off Sweetwater and it arrived after xmas. It's currently going through the ToneRite treatment but it sounds and feels great already.
You must log in or register to reply here.
Share:
Facebook Twitter Reddit Pinterest Tumblr WhatsApp Email Share Link
Top