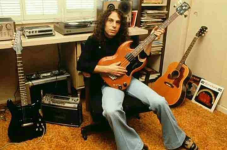 Although Dio is more remembered as a singer for bands such as Elf, Dio, Black Sabbath and Rainbow, Dio was also a very skilled bassist, playing the instrument in his early hard rock band Elf, whose debut album was recorded in Atlanta, GA, and produced by Deep Purple members Roger Glover and Ian Paice.

Dio owned several Gibson basses, all of which were given to his widow, Wendy Dio, after he died from cancer in 2010, and subsequently auctioned off in September of 2018. He also played a Fender Precision.

Bob Daisley I believe played a Gibson EB3 on the Rainbow album Long Live Rock N Roll in 1978, and I believe that Jimmy Bain played a Yamaha bass and a Gibson Thunderbird on most of the Rainbow and Dio albums. For an album made nearly 40 years ago, Holy Diver is still pretty mind blowing. Rainbow In The Dark and Holy Diver, I think, were the best songs on the album. As @Overdriven66 says, Jimmy Bain got some KILLER tones out of that T-Bird and his Yamaha basses, but I think he mostly used Ampeg during those days.

Here is Jimmy Bain with his Thunderbird bass 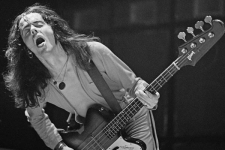 I also know Roger Glover used a Thunderbird when he was in Rainbow. You can see it in the video for Since You've Been Gone.

It was a very sad day when Dio died in 2010. Without Dio's skilled singing, there would be no Creed, Godsmack or Metallica.
Among the many men who attended his funeral were his Sabbath bandmate Tony Iommi, Rudy Sarzo, Rob Halford and Glenn Hughes.

I hope this thread about Dio interests too many heavy metal fans. I need to go find a cheap copy of Rainbow Rising and add it to my record collection...

What a great vocalist . I seen him many times with Rainbow , and Black Sabbath . I was at that memorable show at Radio City Music Hall in 2007 that was filmed and recorded that featured the music that Dio recorded as vocalist replacing Ozzy in Black Sabbath . Another memorable show with Dio Fronting Sabbath was at a Speedway in 1979 as they opened for Blue Oyster Cult and totally blew them away (I would have said blew the roof off , but as it was an outdoor show that was not possible ) Traffic was backed up for miles and we get into the parking lot across the street from the speedway with Sabbath had just taken the stage and opened with War Pigs and when we heard that we double timed it to get inside the speedway .

IMMUSICRULZ said:
He is playing a red 1961 Gibson EB0 bass in this picture, which I believe was taken sometime around 1973 or 1974.

Sharp observation. Rising is also there behind the guitar.
J

I believe that bass Dio is holding goes back to the ELF days. I purchased lots of his memorabilia at his estate auction including his 1953, first year of production EB-1 Gibson bass that he wrote and demo'd songs on. I'm going to be listing some of his things for sale soon.

Looks to me like he is holding it, not playing it. Doesn't appear to be plugged in.
J

benjonas9385 said:
Thats's amazing that you have such old picture with you.
Click to expand...

I believe that was taken in a music magazine interview.

I met him for a second when I was delivering a Duncan pickup to a 19 year old Viv Campbell backstage.