A Tale of Three Pauls

The ‘98 was selected out of a used Guitar Center collection they brought back from an Orlando guitar show just before they were official Gibson dealers, early 2000s. I forgot all of the gibsons they had but a ‘71 Custom, a Deluxe, an Explorer, and more LPs of different ‘70s/‘80s/‘90s vins. I found a Fender tube reissue (Twin or Deluxe Reverb can’t remember), pulled each LP up to the stool playing mostly clean so I could hear the honest guitar tones, and came up with a shortlist of 3. “Fly By Night” chords and walk down riff has long been a favorite for testing elec/acoustic guitars and amps in clean settings, Back In Black a goto for testing overdriven tones, at least to get a quick shortlist. The ‘98 Std, ‘71 Custom and (‘80?) Deluxe were the final 3 before the ‘98 walked out the door with me. When it’s down to a shortlist that’s where I deviate from the Fly By Night/Back In Black and explore more, trying to keep whatever I play on one consistent by playing on the others…riffs, noodling, chording. The 490/498 PUs were obviously a higher output but I didn’t even know what 490/498 pickups were when I was playing it, I was just using my ears (and eyes…looks obviously can’t be excluded from guitar choices). What I DO remember being unique was the “woody” sound of the ‘98…it just sounded like thick, beautiful, resonating wood.

The ‘85 LPC I bought blind off of Reverb circa early 2010’s from a Sam Ash in NJ. I was specifically looking for a black custom. Straight out of the shipping box this thing sounded and felt like a dream and still does.

The ‘86 pre-historic was bought on a whim while looking for a sunburst finish, no particular years or particular models (besides being an LP) I was looking for, just looking for a sunburst finish LP but specifically NOT looking for a new or recent one at the time. Why? Because I was really reeeeeeally turned off by the marketing shit being peddled like “the new 50’s feel Les Paul Standard light gloss finish but with 60s neck that’s kind of like a 70s feel between the 5th and 7th frets on the tone side of the neck, with frets plek’d by a new 8 trillion dollar autoplekker machine here at Gibson with software controlled by Son of Watson OS, fully appointed with two new ‘you will play and sound like Jimmy Page’ super conducting atomic pickups, in your choice of 2 new exciting finishes…‘Fruity Pebbles burst’ or ‘ripened babyshit confit yellow ’, auto tuning keys with mini robot arm extensions that smack your hands if you try to adjust or tune them manually, a 3D holograph embedded into the wood that logs you into all of your computer devices automatically when near and automatically fills your email inbox with the most current Gibson spam and hottest sale items each hour of the day, and featuring a painstakingly-accurate historic truss rod cover designed from 10 years of cumulative scientific studies on vintage 1950s truss rod covers, and two original vintage spec strap buttons designed from analysis of 50s LP Holy Grail strap buttons by the world’s top 2 metallurgists and only forged on days of the month when the moon is in a waxing crescent phase. Each guitar comes with 3 separate certificates of authenticity, a framed ‘outstanding buyer plaque’ to hang in your bedroom where you play, a commemorative official genuine Gibson 5’ guitar cord, and a pick embossed with the official Gibson logo. Cheap marketing techniques and I kinda haven’t followed anything new and Gibson since those carnivalistic ads of the 2000’s and 2010’s. Not that there aren’t fine offerings I’m sure, but that’s what novel overmarketing can do to a respected brand, and reversing that deep of a scourge can sometimes take years. So anyway, the seller of the prehistoric on Reveb was somewhat close so I drove to his work to pick it up, inspect, dry strum and noodle a little. It checked all of the boxes from the pics and description so she came home with me.

I love all 3 of my LPs, but the ‘85 is my fav. All of them are quality pieces but the ‘85 is like a refined, aged orchestral instrument. The pickups are Shaws and, like the prehistoric, measure around the mid 7’s on DC resistance (think I measured one of the LPC’s around 7.34 iirc, the other not far from that, and both prehistoric pups in the mid 7’s as well). The LPC can overdrive with clarity and purity in all 3 toggle positions, chimes and wails on blues leads with a lightly overdriven tube amp setting, and accurately doles out jazzy tones on any selector setting while playing with the knobs. It’s one of those blind purchases I got lucky on. ‘85 is my fav but all 3 are tone monsters, LPC just has a slight edge for my preferential tastes.

So there it is, my Tale Of Three Pauls
S 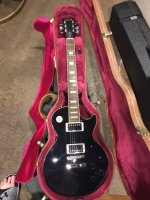 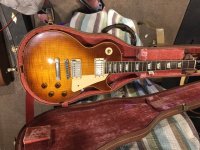 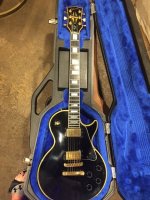 nice post and welcome new meat ..you are a true fan of the Paul 👍

I had an 86 RI as well. Wonderful guitar. I keeps em and plays em an then sells em after I plays all the fancy notes on em.
loved the 86.
S

Was doing a Shaw search and forgot I’d posted this lol. Came across the reverb ad pics from when I bought it. Here are some… 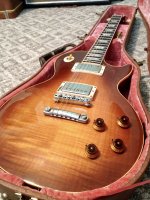 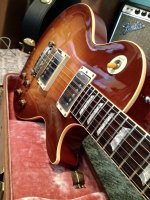 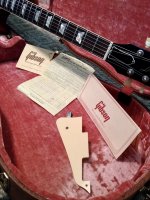 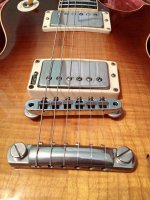 Fooked something up and got double pic posts,sorry.
Is there a sticky on pre-histories here? I know MikeSlub has good info and read his article in Vintage Guitar ‘04, Trogly I’ve read and seems to know his shit. There is STILL a lot of info out there that is taken as gospel through the years and it seems that Norlin was hit and miss on consistency. Even Shaw mentioned in the NAMM ‘15 interview that his paf reissues were made with enamel coated wire and made in Kalamazoo factory before it closed (could be true and then they were shipped to TN for the Heritage Series, IDK). But reason being, this is an ‘86 “reissue”, unmolested covers, no ink stamps but patent pushed into the base plates, the brass screws, the colored marks on the black of each wire as they exit the silver harness, and the little “P at Appl For” sticker that survived on the bridge pup ring. My ‘85 Custom has the same pup specs as this and both pup ring stickers still intact. I wanted to share that info for the “is it a Shaw or isn’t it?” Threads and inquiries and misinformation that Shaws must have ink stamps and they can only be 137/138 then the date codes. I’m not taking covers off of either guitar but would guess both are Shaws. LPC ohms I measure I believe around 7.3 and prehistoric at 7.6 IIRC.

So the prehistoric came with paperwork in the pic. One is the sales receipt that mentions ‘59 reissue but whatever. I have this in storage currently 1.5 hrs away but I’m pretty sure one of those printed Gibson cards that came with it has hand inked specs of the serial, year, and “59 reissue”. I’m older and drink a lot still, but I’m pretty sure that is the case. Could’ve been a blank Gibson card and filled out by the same Gibson dealer it was purchased from or by Gibson factory, idk. But ‘59 reissue is definitely mentioned in the docs I have including the original sales receipt and one of the Gibson cards pictured. I’ve read the “59 reissue” wasn’t used until ‘93 and the custom historic division officially started calling them that, so just a little more info and lore into the whole prehistoric saga.
Last edited: Sep 23, 2022
S

And what started out 3 days ago as procrastination in doing work I should be doing 😞 ended up on a Shaw pickup search, seeing a lot of claims, some seemingly legit, some likely definitely legit with covers off and resistance measures, and probably some hopefuls thinking they have a Shaw PAF reissue. Then that turned into forum and interweb searches that I’d done 7 years ago and led me to post again here.

Interestingly, there is a late ‘80s prehistoric on reverb with the underside of the pickups photo’d and claimed as Shaw PAFs but 12 screws in each, brass bobbin screws, but covers only exposing 6 screws. Still curious about that one as you’d think that would be a Dirty Fingers or replacements. Anyway, just adding my own little facts on what I actually own to this crazy prehistoric and Shaw PAF lore.
S

Looking at the receipt pic, it was purchased new in 1986. Looks like there was a down payment and total sale was one thousand and something with tax 😁 Ah, those were the days. Think I paid $3,200 for this girl in 2015 or so and it was too tempting to pass up. Guy was in Florida so we met halfway when I picked it up. Cool dude, I remember 🤟