Are the pickups crucial to the sound of a Strat?

But, I've always felt that the pickups on a Strat are very crucial to the sound of one of Leo's greatest creations. The neck pickup has a softer tone than the middle or bridge pickups, whilst the middle pickup sounds more...well in between a neck pickup and a bridge pickup!

The bridge pickup, however, is the one used the most on a Strat. The riff on Smoke On The Water, for example, is a bridge pickup on a Strat, as is the riff on Where The Streets Have No Name, and Sultans Of Swing (which is a cross between middle and bridge pickups played at the same time.)
Even newer guitarists like Alex Turner of the Arctic Monkeys have been known to use the bridge pickup on their Strats. And I gotta be honest with you, it sounds really good.

The neck pickup is used for the songs Le Freak by Chic and Under The Bridge by Red Hot Chili Peppers. As I mentioned earlier, the neck pickup on a Strat is quieter than a bridge pickup on a Strat. I think if you had a good set of pickups like a Seymour Duncan pickup, or even DiMarzio humbuckers, like the one Dave Murray has on his Strats, you'll be prepared to play your first Strat!

But just let me know.

NOt quite sure what you're asking, but yes, the 3 single coil pickups are the essential Strat tone. Be it bridge, neck, mid, or the combos, those sounds are what makes a strat a strat. Sure, people like to swap the bridge for a bucker, or swap them all out, but it doesn't sound the same.

The pickups on a strat aren't really any different. Three of the same, maybe a slightly higher winds in order from neck (low) to bridge (higher).

IMNSHO, the tremolo bridge and stock single coils is a strat sound. No floyd rose or locking nut stuff. basic recipe is the definitive strat sound. Dwight Yoakam's records sounds like Pete Anderson playing tele licks, but it's all a pre-cbs hardtail strat!

but what do I know? 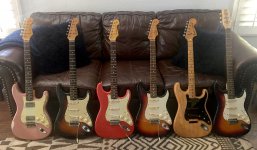 Wilko said:
The pickups on a strat aren't really any different. Three of the same, maybe a slightly higher winds in order from neck (low) to bridge (higher).

IMNSHO, the tremolo bridge and stock single coils is a strat sound. No floyd rose or locking nut stuff. basic recipe is the definitive strat sound. Dwight Yoakam's records sounds like Pete Anderson playing tele licks, but it's all a pre-cbs hardtail strat!

but what do I know?

Nice line up of Stratocasters ! I just had to watch the video for Fast as You and it sure is a pre CBS Stratocaster with Pete Anderson playing on the bridge pickup , towards the end of the tune I did see the pickup selector switch in the neck position . I would have sworn on a stack that Pete Anderson was playing a pre CBS Rosewood board Fender Telecaster Custom as that's what my ears were telling me . Now having said all that I am completely and utterly blown away by the tone Pete Anderson has here playing thru Fender Custom Shop Vibro King amp . This is the proverbial black hole for me in getting a good working Stratocaster tone , clean or dirty .

The reason I mentioned the Pete Anderson tone stuff is that it clearly does NOT sound like a strat. A hardtail strat is pretty much the same as a tele on the bridge pickup. 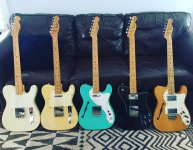 My most striking illustration of how much the guitar itself matters is a Strat.
I have a Jimmie Vaughan Strat that I love...it's a great player, but it had this sort of un-musical high end sizzle (that's the only way I can explain it) that I assumed was the ceramic Tex-Mex pickups.
It sounds a bit like an archtop with a rosewood bridge when played unplugged, but it comes through the amp.
When I changed to some nice Alnico pickups, the sizzle remained.
I can dial most of it out, but not completely.
It's just the way that guitar sounds and I live with it
S

Are the pickups crucial to the sound of a Strat?​

yes, among other things

Like with humbuckers, winders trying to make vintage sound-a-likes, have a habit of following a set formula, and never quite hit the target, as a result.
Like Gibson, Fender didn't make 'balanced sets' prior to the 70s. They made 'one pickup spec' that was less 'rigid' than today. They fitted three pickups 'where they landed', and it's quite common to find the best sounding vintage Strats have the 'hotter' wound pickup in the middle.
On top of that, the Strats made between '59 and '67 had a full size aluminium grounding plate (not aluminium foil) under the three ply guard, which has a similar affect on the pickups as the pickup covers on 'buckers.

You try asking a custom winder to make a pickup exactly the way they did them in the 50s. Most can't do it or won't risk it. I'd be willing to bet, there'd be less than a dozen on the planet who can wind a bobbin by sight, without a counter.

My opinion is that strat pickups matter very much, just like on a Les Paul. I just put a set of these in my 1996 Tex Mex strat. It became the Jimmie Vaughan strat the next year. I also put in 500K pots and an Emerson paper in oil cap. I am using these Duncan YJM Fury pickups for country and southern rock. They are stacked humbuckers and I am surprised how good they sound, especially the bridge. This video helped convince me to try them. It is great to have the hum gone.
Last edited: Jul 16, 2022

Blackmore plays Smoke On The Water on the neck pickup. That is both easy to hear and visible in live videos.