Wally said:
Re: your bridge…the G string is out of the slot…or so it appears to me. I also
would question the compensation there. If the radius is correct and the string gauges are normal, then
Something is off, ime. That is…lif the high E intonated correctly, the G is sharp. If the G is correct, then the high E is flat……and that situation would be problematic because it is all the way forward.
Click to expand...

Intonation is spot on. G string isnt out of slot. Dont forget, its got an Earvana compensated nut, so the saddle positions wont look normal. Joe Glaser in Nashville did the intonation. Hes as good as any luthier in the country. I have him do all my guitar work.,
W

Mustardc Caps said:
Intonation is spot on. G string isnt out of slot. Dont forget, its got an Earvana compensated nut, so the saddle positions wont look normal. Joe Glaser in Nashville did the intonation. Hes as good as any luthier in the country. I have him do all my guitar work.,
Click to expand...

@Mustardc Caps , take a look at the spacing of your str8ngs. The G is too close to the D, and the G does not travel,over the pickup poles as do the other five strings. And…there is a slot in the middle of tht G saddle hat alongside with the intonati9n screw…..the string is not in it.
Enjoy….

I just took the guitar out of the case and looked at it and every string is in the correct slot, and the strings are spaced correctly. I physically measured the distance of every string spacing from E-E and they measure the same.

Well, that was not the case when that picture was taken…as can be seen in the picture.

jb_abides said:
Here's a 2000, looks like saddles in similar positions what is a bit odd to me is the tail piece and the bridge on my LS-320 seem to be misaligned.

Looks like Gibbon's GRIND Love Rock has an even worse case of tail piece and bridge misalignment. 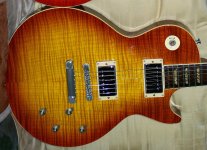 corpse said:
I just wonder if Billy is still playing with .008"?
Click to expand...

I saw a video not too long ago with him, and yes, his tech was stringing-up a new guitar with those .008' hobbies
K

I have 4 sets of Tom's pickups. I have talked with him at length, he told me he just built them like the old ones he repaired in old 50's/60's Gibsons. He said he only used AlNiCo IV in the beginning, but started using AlNiCo II and V by request. He told me the pickup model numbers indicated this, the '455' was AlNiCo IV, 5500 turns, and the '450' was AlNiCo IV, 5000 turns. He has always been very gracious, even repairing a broken coil in one of my sets for no charge. I was sad when Karen told me he plans to retire, but not surprised... he is in his 70's and deserves some free time. To my ears, nothing comes closer to the real deal than his pickups. I worked for a vintage guitar dealer in the 80's, and got to play MANY great examples of Les Pauls, Flying V's, 335's, even an original Explorer (unbelievably rare) through KILLER amps, including a bunch of '59 Bassmans, original Mk I's, Jim Kelley FACS amps, Plexi's, etc... and the Holmes REALLY do vibe like that. My 1998 Les Paul was always a great playing instrument that sounded AMAZING acoustically but was a brutish, non dynamic, fat mess electrically... the Homes transformed it into being able to hang with my friend's (and former boss) original humbucking gold top. A/Bing both guitars through my brown tolex Super... the difference is negligible. Tom has the magic. Anybody who says any different either has never played his pickups, or has no point of comparison. I have a set of Wizz, and their great, but not Holmes great. I had a set of Throbaks, threw 'em back.
You must log in or register to reply here.
Share:
Facebook Twitter Reddit Pinterest Tumblr WhatsApp Email Share Link
Top