Clean players who use Les Pauls

Pat Boyack said:
OK, "some" being the key word here. It sure sounded like you were saying it was a common thing. I don't think it was.

And who DID play guitar on "3 O'clock Blues"? Newborn?
Click to expand...

Yup, I certainly didn't say "all" the time. Once you get used to hearing that sound, the direct sound, go back into your T-Bone catalog, and BB's (and a lot of other blues and R&B guys as well) too... and listen for it. That'll give you an idea of how common, or un-common, it was.

Pat Boyack said:
Some problems with this.

Feedback and bleed from the the control room speaker into B's vocal mic and most studios had 4 channel boards. How could that have been done?
Click to expand...

Feedback, not so much. Bleed, yes... it's the bleed that makes the whole thing stick together. That's why those old records sounded so good, the bleed. Later on, with multi-tracking... that's when the recordings began to sound sterile, nobody playing in a room together. The Beatles and the Stones for example, they and their producers, understood how important it was to track as much of the song live, with all the band playing at once, so the song was "of a piece" instead of "made of pieces."

As far as bleed goes, certain types of mics have null sides that cancel sound. Not all the sound but enough, if you know how place them to keep the bleed down.
Sometimes the whole idea IS to capture the bleed. Check out this track from JD's record... that's one mic, the vocal mic (an old RCA 77) in the room, with everyone playing live.
Scroll down to "What's On Your Mind", click it, then scroll back up to start the mp3 player.
http://simotheband.bandcamp.com/album/simo

I love how someone in that thread makes it sound like the Beatles invented recording direct. Wonder if that guy ever heard of Les Paul??:rofl


chuckNC said:
And bass players have been playing fliptops for decades to get Jamerson's sound. Well, if it sounds right it is right. Right?

I am not arguing here. I'd be outgunned big time if I were!:laugh2: Just making a cheap-seats observation. I don't know that many bass players are familiar with Jamerson's live tone. I'd say they are thinking of his tone on record in most cases. But I can't argue with a P-Bass with flats into a B15 or B18. Who would want to? It would be un uh mer ican! Besides, knowing Igor used a fliptop on gigs is reason enough to put it on the Cool Gear List.

This thread has derailed in a delightful way, I'm both happy and ashamed to say.

chuckNC said:
This thread has derailed in a delightful way.
Click to expand...

No worries about thread derail. It's all about the conversation.
M

I think Les Paul got some pretty nice clean tone.:spabout

Who'd a thunk it: 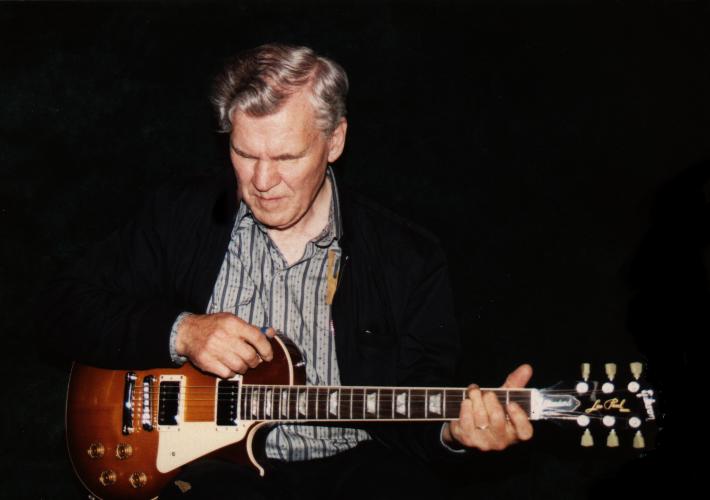 I believe that is Bruce Conte playing his all-hog '57 Goldtop. But I agree he gets a great tone -- and he knows how to use it.

B-rock said:
Warren Haynes has some of the best clean tones.

I love Warren! Although, every time I have seen Warren play he has been plugged into a pedal board. Not arguing with this post. Just offering my perspective of his tone.

Totally agree, MK clean tone is absolutely killer. What am I saying his overall tone is one of the best :dude: :salude

Old thread, but I am playing thru a Deluxe 5e3 copy. Oh boy! Nice tones.

Fornax said:
I've been using my '11 Paul as my workhorse guitar playing in a classic rock band, formally being a Fender player. I am struck on how beautiful the clean tones can be if the amp is up to the task, e.g. Fender twin. The LP design is, by accident or genius, a best of both worlds, straddling clean and dirty timbres. Why don't I hear a lot of players using the LP for clean stuff?