A couple nice close up shots here. What a sick guitar.

Wow, what TV show was this from? Great stuff. I got to play a couple of gigs with Don back in the late, late `80's. He was playing a Strat I think and I asked him about the Explorer and he said it was too valuable to take out anymore..
T

I wouldn't have been in the same room with a drunk "big Girl" waving a rolling pin near my explorer!

His tone on that explorer at the Bangladesh concert is from another planet...if you watch the vid, when he takes his solo on, I think the Leon Russell medley, you can see Clapton sort of watching a,little uncomfortably, like holy sh&@$t this guy sounds amazing through that thing...now I know Clapton was just trying to hold it together during that concert...and in my opinion, Clapton sounded amazing...that's true virtuosity, being able to play like that (Clapton) while in the condition he was in...the version of While My Guitar Gently Weeps from this concert is my favorite by far...sorry to digress...again, just astounding tone from Preston on his solo on the Bangladesh album.

Man...it's hard to get too much Leon Russel (or that Explorer...or Claudia Linear!)

I once met her backstage.
Think it was in the early 70ies. Oh yeah!

A little secret...
It's not the guitar.

I've watched videos of these sessions before and the thing that always strikes me--beyond that absolutely incredible performances--is the utter silence, chill, professionalism between tracks. I can only assume that this approach/attitude comes from LR, at his direction; because IME, humans--certainly musicians--are not naturally like that. After a mind-blowing take like Delta Lady?? Come on! As wigged out as the stage personna of Mad Dogs and Englishmen was (and this is pretty much to the same players, less the Englishmen, right?), when they were recording this film, it was ALL BUSINESS.

That's why they're pros.

charliechitlins said:
That's why they're pros.
Click to expand...

Exactly. But that said, even amongst professional musicians, there are many who are screwups or screw-arounds on various levels. It's still rare to find people who play music for a living (i.e., "pros") who are this disciplined.

While I worked as a "professional musician" for 8 years in my youth and I've been gigging for 50 years, I must admit, it is disappointingly rare that I've been able to play with real pros like this. People that know how to STFU between songs. Guitarists, for example, who don't feel obliged to be playing something during every second of every part of every song. People who you don't have to ask to turn down all the time. (Let alone all the common problems like crappy attitudes, crappy gear, crappy transportation, substance abuse problems, etc. etc.) But there have been a few people I've been fortunate enough to play with from time to time who were indeed real pros.

I actually did play in a band that was warm up act for Leon Russel's band in the early 80s. We played up and down Florida and played with his band maybe 3 or 4 times. He had a totally different band at that point. Those guys were all excellent players too, as you might imagine. They were a bit looser at sound checks and we had some fun hanging out after gigs a few times...but Leon arrived and left separately and never hung out. He toured in his own bus, not with the band. I recall him being spooked by Lennon's murder...

Okay...I've drifted way off topic here...let me climb down off my soap box, lol.

Yes, exceedingly difficult to maintain a pro approach at all times on a stage. Recording I seem to have a built in governor that keeps me from going off the rails.
Nowadays I try harder.
Hopefully I am successful.
Sometimes (mostly infrequently) I am fortunate enough to be playing with people who really know what they are doing. I try to learn from them.

They're like movie stars.
I'm talking about the top cats.
When the film crew is there...or the studio crew or the stage crew...they know that time is money.
Only the worst egos waste that time.
When they do, it means that they're seldom the real talent and/or their career is ending.
The REAL ones know what to do. It's part of being real.
The only time wasting time is tolerated is when it's on the time-waster's dime.
Last edited: May 21, 2022

Awesome picture and one I had not seen before. I see the mini switch is still in the pick guard which makes sense. 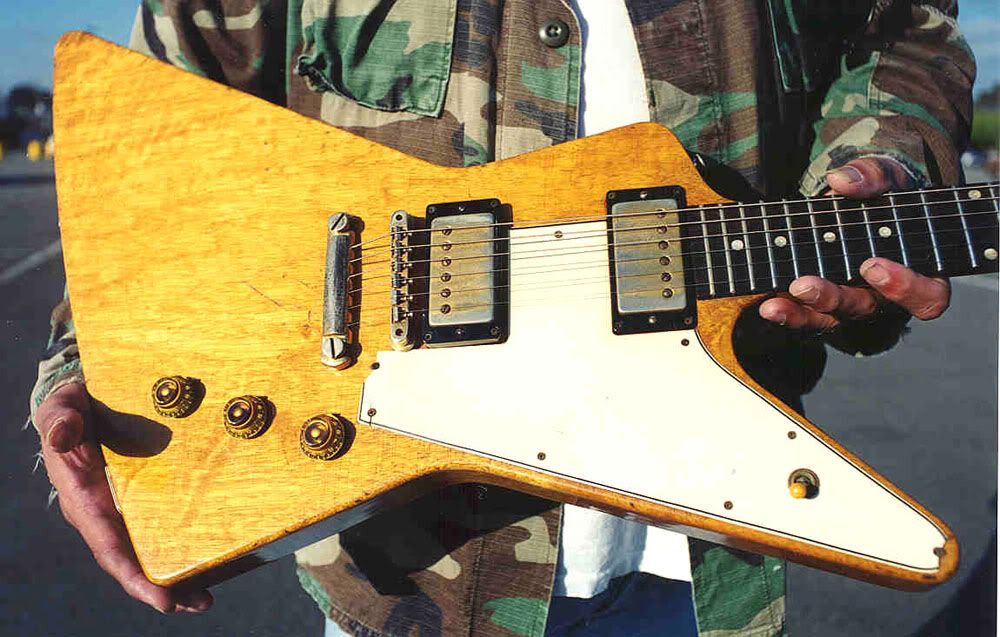 K_L said:
I`m pretty sure that this is the Explorer that Don Preston once owned

I believe you're right. Here is a pic of Don Preston at the Concert for Bangladesh: 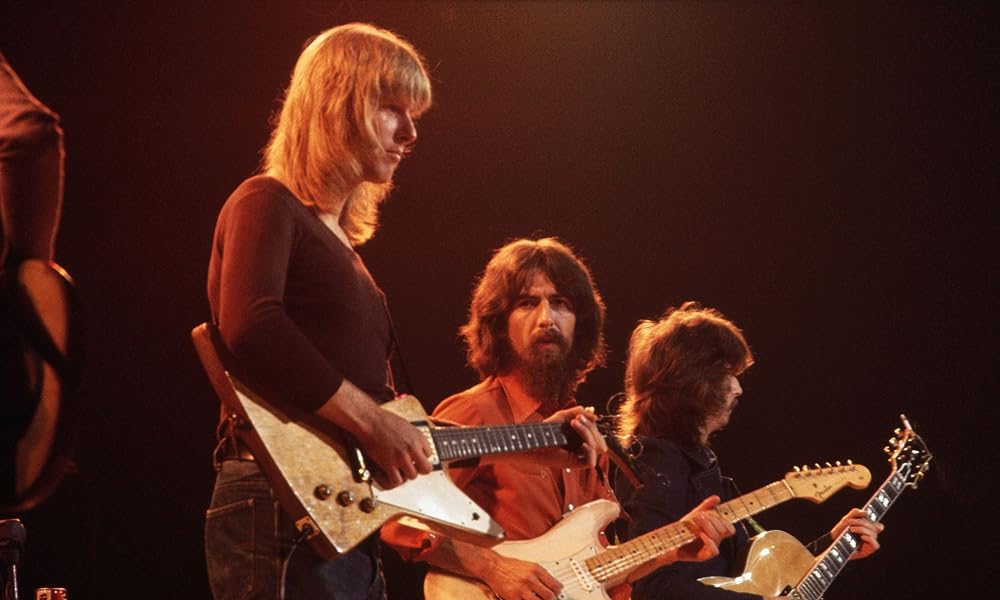 Both pics show the rather distinctive bit of figuring that starts at the center knob and points towards 7 o'clock . The broken tip on the pickguard is also a good match to Preston's guitar. That is Mike Parker with the Explorer when he owned it. He lived in Napa, CA, but has been dead for quite some time. He owned a '63 Explorer when he was very young and eventually replaced it with the '58. He also owned a '59 V.

Brown Recluse said:
I believe you're right. Here is a pic of Don Preston at the Concert for Bangladesh:

Both pics show the rather distinctive bit of figuring that starts at the center knob and points towards 7 o'clock . The broken tip on the pickguard is also a good match to Preston's guitar. That is Mike Parker with the Explorer when he owned it. He lived in Napa, CA, but has been dead for quite some time. He owned a '63 Explorer when he was very young and eventually replaced it with the '58. He also owned a '59 V.
Click to expand...

Thank you for your comments--I have heard of him owning the Explorer & also passing away. Here is a another picture of the same original Explorer on the same day! 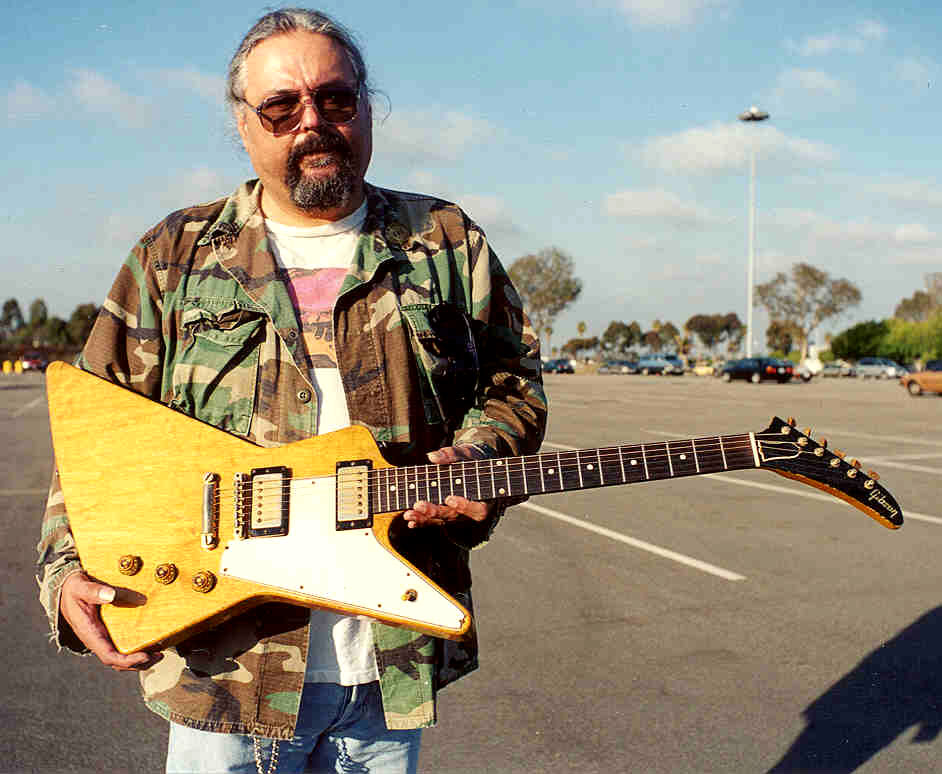