Found a NOS/Unplayed 2001 R8 with insane flamed top. What color is this?

I have a collector friend who ironically doesn’t play guitar, but has several nice Gibson’s he bought in the late 90’s/early 2000’s. This is one of them, a R8 2001 model with an insane flamed top. I can buy it for around $3700 which is not a steal, but considering this top seems like a great deal. The guitar has literally never been played and sitting in a vault for 20 years. Original strings still on it a little oxidation on the frets, and the board is a little dry, but I can fix both of those issues quickly. Some have suggested the color is ‘Amber’ some say ‘Butterscotch’ - what do you guys think? 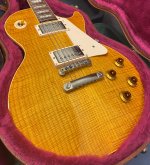 I'd call it Unbutst. On a USA Les Paul, that's amber.

Where are the finger bleeders?
G

Flogger said:
I'd call it Unbutst. On a USA Les Paul, that's amber.

Have no idea - was a special order so probably didn’t come with them. I bought a LP Florentine from him as well that didn’t have strap buttons maybe custom shop QC was down that day. Or maybe since he doesn’t play would never even notice

Butterscotch is what it was called. I love mine. These were before the R8’ became more plain tops. 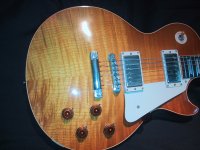 Flame? Not seeing a single flame on that top other than a few wiggles. That’s entirely covered in medullary lines.
Last edited: Nov 23, 2021

Is this the Custom Shop Authentic issue?

I'd also say it's Butterscotch.

Whatever it is, it's bloody gorgeous.

Hope you get it.
A

what is on the pickup covers , vaseline ?
G

Arnold M. said:
what is on the pickup covers , vaseline ?
Click to expand...

no biggie it wiped off easily with some alcohol. Like I said this guy doesn’t play and the cases hadn’t been opened in 20 years so I don’t know how efficient that method is
6

Gibsonguy30 said:
Some have suggested the color is ‘Amber’ some say ‘Butterscotch’ - what do you guys think?
Click to expand...

In 2001, Gibson's name for the R-8 finish depicted was Butterscotch. Whenever anyone asks "What color is this guitar," you can count on a bunch of "Well, I'd call that color _________"–type replies. And I'm sure that people could get pretty creative with their word choices. But as an actual specification of a particular year and model of guitar, the only "correct" answer to the question of "What color is this guitar" — that is, the one that counts — would, in my opinion, be the finish designation that the manufacturer actually used for the given guitar at the time it was produced. In this instance, it's definitely Butterscotch. (Coincidentally, the first R-8 that I ever owned was likewise a 2001 Butterscotch model that I purchased brand-new in 2002 from Dave's Guitar Shop. )

Beauty is in the eye of the beholder but that has almost no flame and is one of the least attractive tops I’ve ever laid eyes on. just a grid of crisscrossing grain lines

I’d call that a stalk of corn burst. And as someone said, Butterscotch would likely be the color.
L

I love the look.

Gibsonguy30 said:
Good eye… yes he put a clear grease on all the metal parts to prevent corrosion

no biggie it wiped off easily with some alcohol. Like I said this guy doesn’t play and the cases hadn’t been opened in 20 years so I don’t know how efficient that method is
Click to expand...

I can dig it .. makes sense

Arnold M. said:
what is on the pickup covers , vaseline ?
Click to expand...

It's the new way of aging pickup covers . Just don't touch them ,

I’ve heard this called butterscotch, amber, and antique natural. A quarter sawn top and tight flame is a big personal favorite of mine.

It’s funny some seem to really like the top. I’m in the other camp. Very non burst looking. I can see the attraction it would have to certain folks. Just not me. Cool guitar and I bet it sounds just fine.

Butterscotch was the color. Most came with the little round pickguard sticker that read "BUTTERSCOTCH"