Gibson Demo model? What does this mean generally?

a dealer told me a particular guitar iwas intrested in, was a Gibson demo model?
help me please?

It could mean a few different things. Ask the Dealer.

It could be a Gibson sales rep's sample.
C

It means he doesn't like you and you should buzz off. Do this...

probably means its exceptional in some way, either tone or top. Usually top.

It could also mean that someone bought it, brought it back, and now they can't sell it as new stock, but may still provide the (cough, cough) warranty. . .

or it could be one of those with the chunk missing out the back so they can load alll of their different pups straight in. you guys seen these things?
T

The first LP I ever bought was a "demo" as I later learned. I bought it back in '98 thinking I was buying a used '98 (not knowing how to decipher the serial number). I then learned it was a '95 bought in '98. Suspecting something fishy, I got in touch with the store it came from, the seller and with the distributor here in Canada, Yorkville Sound to learn that it was sold to the store as a demo (and should have been stamped "R" by the folks at Yorkville).

The original owner never knew that he was buying a demo (at least that's what he says) and the original store invoice doesn't say so either. As for the definition of a demo, it is a guitar used by the sales rep. The kind of guitar that is taken across the country to different small scale stores (who can't afford to carry lots of guitars) to be, you guessed it, demoed by prospective buyers.

As for the guitar itself, it came with all four knobs with cracks in 'em, it has a few nicks on the back of the neck, a little orange peel in some spots, some pink dye also has leaked into a small part of the binding (because of the shroud in the case). It is ebony and when you look at the top closely, you can see sanding marks. Other than that, it's very clean, making it a regular "very" run of the mill Gibson guitar of that era, but now, equipped with '57 classics and after a good set-up it rocks.

To make a long story short, it's a used guitar with numerous shortime owners!
I would guess the same definition applies in the US.

It is a floor model that people demo'd. Like a car. It is what every guitar in GC is. DEMO's usualy show some wear from customers trying them out.
J

when i purchased my o2 r8, from my local gibson dealer wanted to find out about what pu it had based on serial # it should of had bb but it has 57s called gibson wondering why the pu were not correct, asked where it was shipped to was told it was made as a promotional piece. it had all the tags and case candy, but the guitar has a dark mineral streak on the top. since i feel that the price was fair i bought. not sure if it was deemed a promotional piece, because of this... but plays great just was confused. ever hear of this

....a demo..should mean a decent discount and a worthwhile purchase...if it hasn't been tortured...

Man, how hard was that??

I agree BA, but I also believe my first response is another valid point. I've returned new things at shops after only a few days of owning them, and have seen them back on the floor again marked as a "Demo."

Thanks for the responses. I needed clarification in the definition "DEMO" in terms of a Gibson dealer definition, not what the word and it's abbreviation stands for... I should have been more clear with my question... Sorry!

I found out that it does have a definite defenition as it pertains to "sales rep demo" for smaller dealers as Templar noted.

I'll let you know how it goes.

As it happens, BA is rather well qualified to provide "Gibson dealer definitions".

I must admit, I've never heard of this practice in the States. In fact, it sort of flies in the face of Gibson's desire that dealers maintain stock levels.

To me, a "sales rep demo" would be the guitars they bring around to get you to buy into the line. These tend to be carefully chosen, and I'd pay extra for one! They don't, however, get roughly treated.

I only asked because it was the first time a dealer(a very small one, I might add) referred to a Gibson in this way. I am a collector and player of many guitars, but I am still learning every day and more than willing to ask a stupid question from time to time.

I have a 2018 Gibson and on the back of the headstock it is stamped Demo on it, so ya they are out there, These guitars have extra on them, mine has P-90s, Volume indicators, and drop orange capacitors in it. They are used by salesmen to help sell their products.

... just to keep things current, and for those who are unaware:

'DEMO' stamp on the headstock along with a 2 year limited warranty. 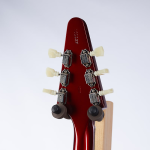 Various conditions, some prices too high, some are deals. They ship direct from Nashville's Repair and Restoration department.


This is distinct from the Gibson Direct MOD Shop which of course sells modified products stamped with 'MOD' on the headstock -- one-offs, prototypes, and what I take as seconds that are 'fixed' using parts changes and clever redress finishing to disguise the oopsie and impart character and thematic styling.

Some interesting stuff there, so stomach churners too, at least to these eyes. Taste being subjective...

To make matters more confusing, sometimes you can find a 'MOD' stamped guitar in the DEMO Shop on Reverb, but I haven't seen a DEMO stamped guitar on the MOD Shop site.

So it goes with Gibson... 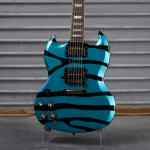