Mike McCready is one hell of a Strat player

As a devoted Pearl Jam fan I do think that Vitalogy and Ten are their best albums. The rest of their albums are not as enjoyable to listen to.

Whilst his guitar playing is not as fixated as his bandmate Stone Gossard, Mike McCready is an excellent guitarist for Pearl Jam, his snarling Strat and Les Paul tones playing hide and seek with Stone Gossard's lead, Hendrix inspired riffs, amid the vocals of everyone's favorite grunge frontman, Eddie Vedder.

Pearl Jam’s Mike McCready has earned his place among the giants of rock ‘n’ roll guitar. Best known for playing a ’59 Strat®, his searing leads are steeped in blues and classic rock reminiscent of Jimi Hendrix, Pete Townshend and Keith Richards, and his peerless work on hits, including “Yellow Ledbetter”, “Even Flow”, “Nothing As It Seems” and countless others, helped pave the way for Pearl Jam’s 2017 induction into the Rock & Roll Hall of Fame. McCready’s guitar work in Seattle supergroups Temple of the Dog and Mad Season also featured instantly recognizable Strat riffs, such as those heard on “Hunger Strike” and “River of Deceit”.

Inspired by Strat wielders Stevie Ray Vaughan and Jimi Hendrix, McCready set out early on to acquire his own ’59 Strat, and, serendipitously, with his first ever vintage guitar purchase, he found “the one” that has been his primary Fender instrument ever since. Now some 28 years later, McCready’s iconic Strat can be heard featured on tracks “Superblood Wolfmoon” and “Dance Of The Clairvoyants" from Pearl Jam's most recent studio LP, Gigaton.

I believe that Mike McCready also owns a 62 reissue Strat.

In this first-time collaboration between Fender and McCready, the Fender Custom Shop is honored to re-create this incredible instrument in exact detail, and in doing so a long held secret about the guitar’s lineage was forced to be revealed to its owner: the Strat was actually constructed in 1960, not 1959 as had long been believed.

For this limited 60-piece Masterbuilt run, the Custom Shop’s Vincent Van Trigt carefully disassembled the guitar in order to note and measure every detail, curve and scratch - and there are plenty of scratches, thanks to McCready’s exuberant style! The recreation features an ultimate Relic® lacquer finish on a two-piece select alder body; a flat-sawn flame maple neck with a 1960 “oval C” profile; and a flat-lam rosewood fingerboard with 21 vintage frets. Custom Josefina hand-wound pickups matched to the originals are connected to a five-way switch and vintage wiring, including a “treble bleed” tone capacitor. Other features include a three-ply vinyl pickguard, vintage-style synchronized tremolo with Callaham bridge block, vintage-style tuning machines, bone nut, and wing string tree with metal spacer. Includes deluxe hardshell case, strap, polishing cloth, McCready case candy kit and certificate of authenticity.

I really think I want a Mike McCready Strat now. I think he is one of the best guitar heroes of the Nineties, and if I ever meet Mike McCready one day (and I'm sure I will) I will ask him to sign my guitars.

He won me over with his playing on both "Yellow Ledbetter" and "Hey Baby (New Rising Son") the latter he played on for the Hendrix tribute cd Stone Free, under the moniker of M.A.C.C. Great Strat tone and channeling of the Hendrix vibe.
J

I love No Code

Johnny Q said:
He won me over with his playing on both "Yellow Ledbetter" and "Hey Baby (New Rising Son") the latter he played on for the Hendrix tribute cd Stone Free, under the moniker of M.A.C.C. Great Strat tone and channeling of the Hendrix vibe.
Click to expand...

Agreed! And they rest of that tribute CD is great too. Paul Rogers, Clapton, Brian Setzer and a sleeper but killer version of, 'Spanish Castle Magic' by none other than, The Spin Doctors, of all people.

I saw PJ a few months ago and was lucky enough to stand directly in front of McCready and watch him. He's super high energy with a great stage presence. His solos were the best part of the show for me. 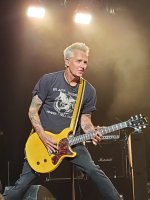 Saw Pearl Jam live and they were holding nothing back. Great gig.