I found the guitar here in the UK. It had sat on Reverb for a month with nobody buying it. I had seen it when it first went up, thought it must be refinished and tried to forget about it.

But a voice inside my head kept saying "what if it's factory"? So I messaged the seller about the finish and he replied saying lots of people had asked about it but he couldn't confirm it was real. I think that's why nobody bought it, because they thought it was refinished. How could it be real and priced at what most people are asking for a Sunburst?!

Then I had the idea - the only way to confirm it would be the shipping ledger. Mat Koehler and I follow each other on Instagram and have messaged back and forth a few times. So sent him a message asking if he'd be able to check the ledger for me, he said he'd try when he could and the next day sent me a photo confirming it!

It's in generally great condition but has two 'issues' 1. Someone has removed the finish from the fretboard binding - it still has it's original frets and the binding it in great condition (even has tiny vintage nibs), so I wonder if an owner didn't like the way it was wearing with play and just stripped it all off? 2. There's a ding by the treble side of the bridge that someone touched in with a sharpie. Otherwise it's exceptionally clean with barely any checking.

I've never had an acoustic archtop before and in all honesty bought it because it's so rare (only one ever made?). But it's a revelation, that archtop 'cut' people talk about is all there, it's so loud and I love playing it. Anyway, enough rambling. Here's some pictures: 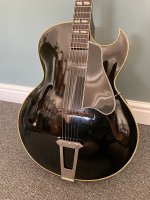 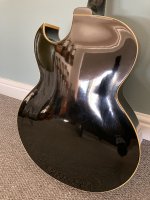 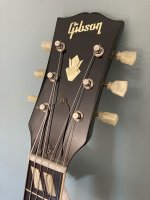 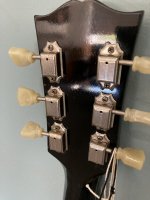 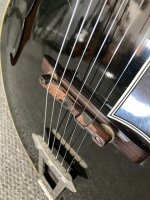 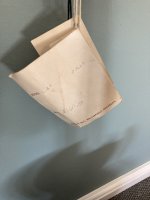 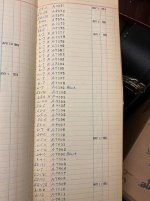 Fantastic find, and very exciting that you were able to get the ledger verification (I've attempted to do the same a time or two, without success).

I have always been of the opinion that the more unusual/rare/one-off/custom-order Gibsons are more appealing and special than their standard (in this case, blond or sunburst) counterparts, and should carry a premium value. Give me something that's relatively rare and unique every time. Add to that the fact that black is just so elegant, and is so much a part of Gibson history (the early 20th century instruments finished in black; the wartime specials, etc).

Many years ago when I was still looking for a Gibson archtop with a Charlie Christian pickup, I came across a few examples of the rare 1958 L4CES model with the CC pickup. I instead ended up finding a CC-equipped L5 that was custom-ordered in 1966, but those L4's are still very attractive to me.

I've owned many archtops over the years, but only a couple of acoustics. I always wanted mine amplified, and I used a few different models from DeArmond. That was many years ago, though. These days, if I had a guitar like your L4, I would be strongly tempted to try a floating CC pickup by Pete Biltoft:

I love that guitar!

I do have an early 60's L-4C. Always a fan of the ES-175 size and appointments. Love having one with carved spruce top and floating pickup!

a little clip that , IMHO, catches the great voice of the L-4C

Wilco, fabulous playing! I agree with you about the size and appointments. I've had a couple of ES-175s in the past and have always found the size very comfortable, particularly compared to my ES-300 or Switchmaster, which as a small guy do feel on the large side (and me with a Super 4 looks like a child with his dad's guitar).

Jim, I'm quite traditional in that I've always wanted my acoustic guitars flat with a round hole in them, and everything else to be amplified. The L-4 has somewhat changed that - it has a wonderful acoustic voice which is great for playing around the house (particularly when the kids are asleep) but set up with flats feels more like playing a typical electric, so it's the best of both worlds.

However, the longer-term plan is to find a double McCarty for it, which will give me the amplification I do want but also look completely factory. I say 'longer term' because I think it will take a while to hunt one down. I know where there are a couple of singles for sale, like Brown Recluses stunning L-7 above wears. But I'm going to try and hold out for a double.

A floating CC would be a wonderful idea too, and give the guitar a different voice. Plus, it's such an easy swap to make. 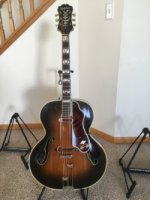 wow! what a beautiful guitar!!! i love black gibsons,,,,and yours is so cool!!!!! congratulations on the detective work too.......enjoy it.
V