This is my 3rd NoNeck. I bought a new one in 2009 in Surf Green. I had it for 2 years, but decided I want a 1- piece maple neck. I had that for 10 years, but it sustained some water damage at a gig and never played the same. So, I've been waiting patiently for Tommy at The Music Zoo to get some more guitars delivered, with the specs I'm looking for. Well, she arrived the other day and it's now in my possession.
2022 Fender Custom Shop 1960 NoNeck Strat
Sonic Blue NOS finish
Slab rosewood board, sorted for dark wood
Thick/deep/fat shouldered "51 Nocaster "U" shaped neck. 1st fret depth 1.015", 12th fret depth 1.020"
slight flame to the maple neck
Alder body, sorted for light weight
CS 1960 Strat pickups
CS 1960 Strat hardware and electronics
weight - 7 lbs even
I can't believe how much I love these big/fat neck guitars. And they are a joy to play. All of my guitars are 1" thick at the first fret. I'm spoiled. I could never go back to a standard sized neck. 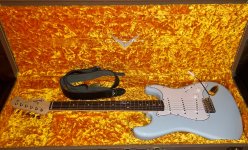 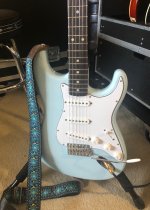 and play her in good health!

Mega congrats on a most fine new beauty ! I have seen the No Neck monikor many times , but I need some more clarity if you could please tell me more about it ?

El Gringo said:
Mega congrats on a most fine new beauty ! I have seen the No Neck monikor many times , but I need some more clarity if you could please tell me more about it ?
Click to expand...

.......you know there are many, many players who like a big fat neck, right??
Well both Fender and Gibson players have had to settle over the years. If you wanted a big Historic neck you had to get an R7 or R8. Most times even they werent big enough. Thankfully the M2M program fixed that problem. Now my neck profile is on file with Gibson Custom ( 1 full 1" depth at the first fret, with little taper through the 12th fret and massive shoulders)
The same for Fender. If you wanted a big , fat neck your only choice was a '51 Nocaster, with its huge, 1"- deep "U" shaped neck. If you wanted a Strat you had to settle for a '56 "V" neck, that was nowhere near being big. Also, no options for a big neck with a rosewood board. You were stuck with that '60's Oval 'C" , which is like a toothpick, if you wanted RW
So Tommy Colletti at The Music Zoo had a brilliant idea. A Strat with a big fat Nocaster sized neck. Hence, the NoNeck Strat. Its based on an NOS 1960 Custom Shop Strat, but with a '51 Nocaster neck profile. The first one's were in 2009. I had a Surf Green 2009, with a rosewood board. In 2011, I decided to go with an Olympic White, with a 1-piece maple neck, which was a special order. After that Tommy starting ordering both necks for stock. He's also branched out into the Closet Classic, Relic and Super Relic's with both necks.
In the beginning all the necks were between .990" and 1' at the first fret. Now they vary from .950" to 1". As mentioned above, he called me last week and said "I have your guitar...over 1' at the first fret and really light"......He was right.
You must log in or register to reply here.
Share:
Facebook Twitter Reddit Pinterest Tumblr WhatsApp Email Share Link
Top