Other people playing your guitars...

An interesting discussion about other people playing your guitars has evolved in this thread in the Vintage 1952-1960 pub:
Help Wanted
Some members are adamantly opposed to others (save their tech/luthier) handling their guitars - vintage or not. Others have a far more relaxed attitude. It's a fascinating discussion and I assume there are certainly old threads one precisely the same topic.

Playing a guitar in a guitar shop or a guitar show doesn't count. That's what guitar shops and shows are for. I've played a 1941 D45 at a shop, no questions asked...(believe the hype.)

I take the more conservative approach with my gear. I might allow I player I know and trust to play one of my guitars so long as they're sitting in a chair and the guitar strap is on. This is reasonable.
I would NEVER allow someone to play one of my guitars at a gig and I'd absolutely NEVER allow anyone to borrow one for an extended period of time.
I learned the hard way by letting a bandmate borrow a nice old D28 for a weekend. It was returned to me with a broken headstock and no explanation. I've another story about a Tele I let someone play...alas.
On the other hand, I have borrowed other people's guitars for studio work. I've been trusted with other people's valuable/vintage guitars many times for many purposes. A long time ago a buddy lent me his blonde 335 for a gig - but that's a story for another time...(it sounded great but I missed my Les Paul!)

My bottom line: No, you may not play my guitars.

What say the rest of you? Who can play your guitars?

Doesn't happen with me.

I let my friends, who are all respectful when it comes to my guitars, play them whenever they want. I also have lent my guitars to friends. But strangers I don't let play anything!

I'm pretty easy with my guitars. My friends are always welcome to play whatever they want and when someone comes up to me at a gig asking about my gear, I'm happy to show it to them and let them play it if they want.
Having worked in guitar stores, whole sales and repairs, I've handled so many guitars and I wouldn't be where I am today if no one had trusted me with their guitars, so I'd like to return the favor.

mine are all upside down and backwards, so no takers...

I've never said no, ever, in fact I encourage anyone to take a gander. I even let a drunk fella heckling handle one of my fancier ones so he could get up and sing a song. He got his due, lol. I don't own a 'burst but if I did I'd be as liberal with it as anything else. I used to have long jam sessions in a basement during college where other guys would play my L5-S for hours. Good times.

I was starting to play with one chap once, that I was going to try and start a band with, and I let him play my R4 during a rehearsal. All of a sudden he gets so into it that he starts bopping up and down, with his hands off the guitar while it was hanging around his neck! And yes, regular strap, no locking buttons or retainers. That’s the last time I ever let that ding bat play one of my guitars.
So it heavily depends now!
S

No to strangers and I don't lend 'em out, other than to close mates and my Dad.
I had a guy come up to me after a gig, once and ask me if he could have a go on my guitar. I replied "Can I have a go on your girlfriend?"

somebodyelseuk said:
No to strangers and I don't lend 'em out, other than to close mates and my Dad.
I had a guy come up to me after a gig, once and ask me if he could have a go on my guitar. I replied "Can I have a go on your girlfriend?"
Click to expand...

What was his answer?

somebodyelseuk said:
No to strangers and I don't lend 'em out, other than to close mates and my Dad.
I had a guy come up to me after a gig, once and ask me if he could have a go on my guitar. I replied "Can I have a go on your girlfriend?"
Click to expand...

I thing that's a fair compromise

Part of being xenophobic is anyone can play my gear but they have to find me first.

This is an interesting question and can be troubling. I've encountered situations where it was extremely tough to say no. At the same time, I don't want to be a curmudgeon. And yet, I came up in a tight enough financial situation that I didn't have a real decent guitar until I had been playing for seven years and I saved for that first one, a Les Paul, for three years! it was years before I added another good guitar. That does something to you.

It really comes down to individual cases, actually. I don't let people whom I don't know just walk up and use my tools on a lark, no, and I don't typically loan them out. However, I've got friends who I'd trust to try my guitars because they are responsible enough to look at my guitars and realize that I take care of them and then treat them right. I've actually bought a couple of guitars in order to have them around at the studio and be able to let others use them without being too guarded.

The whole ethos of the UK LPF meets are predicated on the simple premise that everything that's brought is playable by anyone, and I mean everything, 'Bursts included.

People leave the rooms where their treasures are in the hands of relative strangers, I have never heard a single voice of concern raised. Ever.

We also have another unwritten rule - no dickheads, so there is that to be taken into consideration.

I have found exceptional grace amongst my fellow musicians, truly exceptional. I'd never have gotten within a country mile of a 'Burst otherwise, and I've now played a few, to say nothing of the other vintage guitars that I've had in my hands.

S'funny, when a favour is needed, these people seldom have to ask twice.

True story, I hit the buffers a few years ago, had to sell everything - small rigs that had took me decades to put together. No boo hoo's from me, for the reason I had I'd do it again in a heartbeat. It didn't take long for the offers to start coming in, loans of gear, offers to give me gear, return of gear I'd bloody sold people for gods sake was offered back to me for nothing. I was literally blown away...nobody was taking the piss, they just spotted a guy with itchy fingers. I remember every single act of class, every single one of them. Gentlemen of this very forum put their hands in their pockets and bought me a frankly world class guitar, you know who you are ( which is a bloody good job, because largely I don't, the majority had the further grace to remain completely anonymous. ) Suffice to say, that guitar is my treasure. It's also available to anyone who wants to play it. 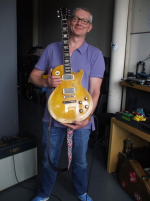 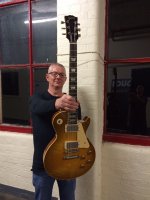 Never far from my hands. 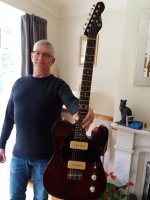 I even got meself on the cover of one of the 'Burst Believers books by Vic and David, holding other peoples guitars!!!

I'd get where gas couldn't. Infamy at last.

Blackjack30 said:
Doesn't happen with me.
Click to expand...

When I was 17 I headed down to school with my '62 ES-125t in the trunk of my car, I also had a Les Paul studio. So, I unpack my stuff in the dorm and open the ES case to....a broken headstock! Something happened, maybe the big ass flats I had on it had too much tension? I've broken others too.

Well I walk into an audition with my damn Les Paul studio feeling a hair less "jazzy" so to speak. I ace the audition then tell the head of the department what happened. He says "play this green guitar," it was a 7 string. Awe crap. So, he let me play the green guitar for weeks while I waited to get the headstock repaired (ended up having my stepdad do it).

You know what the green guitar was??? I was a ****ing Benedetto! I had no clue what it was worth until after I'd been using it. I've always encountered the spirit of community in 99% of my musical travels and can rarely recall anyone every saying "no don't touch that.." Because of this, I have repeated that philosophy.

corpse said:
Part of being xenophobic is anyone can play my gear but they have to find me first.
Click to expand...

I don't play out, so I don't have randoms asking about it, but I generally don't have a problem with friends and stuff playing my gear, as long as I know they play in the first place. The last time I let someone else play one, he dropped it facedown (Gibson SG.) I'm lucky the headstock didn;t break...

corpse said:
Part of being xenophobic is anyone can play my gear but they have to find me first.
Click to expand...

Don't be counting those chickens just yet...I know where you live.

One of these days that tap tap on the door.....