Virtually every musician in Canada has played through Traynor or Yorkville equipment.

Do you have a source? This Southern U.S. citizen has played Traynors for over thirty years.

My YBA-1 is my all time favorite amp.

More HERE in the Toronto STAR.

My 1st good amp in HS was a Traynor, great amp too. RIP Pete Traynor.

He helped create some wonderful amplification.

definitely an innovator.affordable quality gear.nice to see he is not passing unnoticed

From Robbie Robertson's Facebook:
"Pete Traynor or Thumper as we called him, was an old pal of mine. We played in several bands together: The Rhythm Chords, Robbie and The Robots, Thumper and the Trambones, and the Suedes. He could just as easily build a guitar as play one. He hot-rodded my amps, guitars, or anything he could get his hands on. We ran together, double dated, and tried to stay out of trouble, sometimes unsuccessfully. As I went off to Arkansas to join Ronnie Hawkins and The Hawks, Pete went on to become the premier guitar amp maker in Canada. He had an amazing gift for electronics and his amps had a powerful crystal sound. Some years back, they were making a documentary on me and Pete and i met up at my mother's old house in Toronto. He still had that fire in his eye like he needed to figure out what to build next. If David Bowie or Prince need an amp fixed up in heaven, I can tell you they're in good hands now. Thanks Thumper, for all the good times and wonderful memories. Blessings, Robbie"

My first good, loud and big, (had to be tall), Rock amp for giging was a YBA1 Bassmaster. Back in the late 60's I found my sound thanks to Peter. RIP :dang

I took my September 1973 YRM-1 Reverb Master out for a spin with several guitars today to remember Pete. Traynor associate Dirk Vandersleen developed this one from the Bassmaster, adding master volume and reverb. It was the last model to get the drop test. 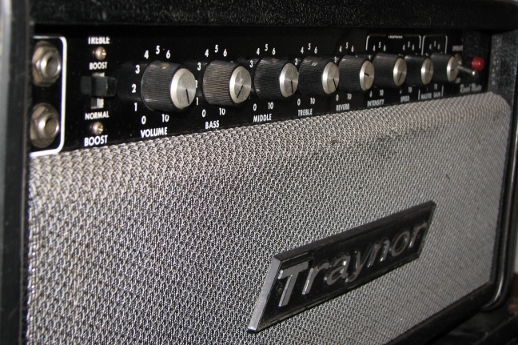 It is such a cool, flexible amp, covering sonic ground from Fender to Vox to very near Marshall. It can offer anything from a very muscular clean to medium gain with nice singing sustain. Thanks, Pete.

I've used Traynor Amps on & off for the last 45 years. I have a YGM-3 Guitar Mate (1-12") and a YGM-4 Studio Mate(4x8"!!) The YGM-3 has an alnico Celestion Blue & the YGM-4 has two Weber alnico British voiced speakers and two Celestion 8". These amps sound like a cross of an Ampeg, Fender and a Vox with maybe a little Marshall in there too. I love mine. They work great with another amp as the combination of the Traynor and either my `61 brown Deluxe or my 1974x Marshall sound wonderful together. I've worked on alot of Traynor's over the years andpretty trouble free amps that usually just need the old Filter caps/cans replaced and bias adjusted on the ones with a bias pot..
Thanks for the great amp Pete!!