There are two sides to every CBS Fender product: Either you like it or you don't.

In July of 1962, Fender's catalogue included electric guitars (Which were the Duo-Sonic, the Esquire, Esquire Custom, Jaguar, Jazzmaster, Musicmaster, Stratocaster, Telecaster and Telecaster Custom), and three basses (The Fender Precision Bass, Fender Jazz Bass and Fender Bass VI), five steel guitars, two pedal steels, and 13 amps. But in early 1965, Leo Fender would sell the instrument brand that bears his name to CBS for $13 million, which was considered to be one of the biggest sells in the history of music at that time.
The transition Strats and basses are often disliked by guitar aficionados for this reason, but they are good guitars. However I will not be discussing transition Fenders (64 or 65) for obvious reasons, though they aren't bad instruments either.

By 1968, the Fender Stratocaster headstock was enlarged (which made it harder to tune a guitar, not to mention that the headstock had a greater risk of falling off, breaking and or getting damaged.) The blocky black lettering had also arrived. To be honest, I think CBS Fender guitars are more recognizable than any other Start in existence (except I also like 54 Strats and 61 Strats, and also find them to be pretty recognizable.) Bodies became less contoured and harder to carry, finishes got thicker in later years, and 3-bolt necks started appearing in 1970. It was all a little regrettable--but a lot of artists played CBS Strats, and they didn't seem to have a problem with it! In fact, Doug Fieger, the rhythm guitarist and vocalist for The Knack, admitted that My Sharona was played on a 1972 Strat he bought brand new because of its maple neck, 3-color sunburst finish and maple fretboard, which reminded him of one of his earliest musical influences, Buddy Holly. The song also used a Vox AC30 amp, both of which were auctioned off shortly after Fieger's death in 2010.

Not to mention Hendrix's Woodstock Strat (which sold in 1990 for 198,000 and again for $1.3 million in 1993, it is now on permanent display at Microsoft cofounder Paul Allen's Experience Music Museum in Seattle), Malmsteen's 72, Ritchie Blackmore's 1968 (which was played wonderfully on those great Rainbow albums). I think a CBS Strat is equally as tasty sounding as any other Strat ever. Plus, I always associate sunburst and Olympic White with the finishes of a CBS Strat, though CBS Strats still had both maple and rosewood fretboards. In fact, here is Ritchie playing his Strat with Dio: 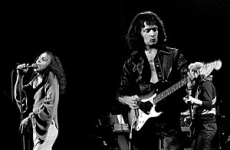 Also, Neal Schon played Strats, Fast Eddie Clarke of Fastway and Motorhead played a very heavily modified CBS Strat, Randy Bachman owns a 71 Strat that he has also heavily modified, The Edge used a 73 Strat through a Vox AC30 amp on Where The Streets Have No Name (he has also played several Norlin gGbsons), Ry Cooder has played a Strat, even Susanna Hoffs of the Bangles has played Strats.
Lowell George used a CBS Strat on most of the Waiting For Columbus album (which he also modified with Tele pickups), Ed King of Lynyrd Skynyrd owned a 73 Strat, John Entwistle of The Who owned a 68 Paisley Strat, Noel Hogan of The Cranberries played a 1973 Fender Telecaster (which was his first guitar), Billy Corgan of the Smashing Pumpkins played a sunburst 1973 Fender Stratocaster (which became the model for the Billy Corgan signature Strat), John Mayer owns several Fender CBS Strats (he mostly plays Paul Reed Smith guitars now due to the endorsement deal, but if you listen to his early records they are all Strats...), I think Tommy Shaw plays some Strats. Bruce Kulick does. Jim Root of Slipknot has both signature Fender Strats, Fender Telecasters and Jazzmasters, modeled after his CBS Strats, CBS Teles and CBS Jazzmasters he plays in Slipknot, I think Gavin Rossdale of Bush also plays a CBS Sunburst Jazzmaster. Jimmy Page played an Olympic White CBS 1971 Stratocaster, which recently sold at auction, Kerry Livgren of Kansas also played a CBS Sunburst Strat with a rosewood fingerboard (you can see it in the video for Carry On Wayward Son), Jim Adkins of Jimmy Eat World has a signature Tele modeled after a CBS Tele, the Johnny Marr Jaguar is modeled after a CBS Jag, the Troy Van Leeuwen Jazzmaster has the block inlays that have the binding on them.

But I hope people like this thread about CBS Fenders.

I just flipped my '76 Strat.
It was mint, well-constructed (tight neck pocket) and sounded JUST like you'd want it to.
I was torn between putting fatter frets on it so I could enjoy playing it, or flipping it.
Obviously, I chose the latter...I didn't want to be the guy to refret the possible future classic.
While we're on CBS-era Fender...
I have a mid-'70s silverface outboard tube reverb which is a completely different circuit form the old 6G15 and possibly the only product that CBS redesigned and IMPROVED!

Also of importance: the Fender Starcaster, a semi-acoustic hollowbody guitar, was introduced during the CBS phase of Fender. Melissa Etheridge has played one, and so did Jonny Greenwood of Radiohead.

I would say most Strats til 1974 (with alder bodies and with staggered poles on pickups) are tonally good. The alder ones were still light and resonant. In fact i have had a 73 alder one with rosewood fingerboard, which could rival many mid to late 60s tonewise. In 75 and later the things went rapidly downhill.

Lots of players used CBS era Fenders, not the least of which:

Personally, I love the look of the large headstock.

I onl;y have my 2000 Am Std strat, but having sold them for several years, and a regular prowler of various shops, I've held and played dozens if not more of CBS era instruments.
Personally, I can't get past the big headstock - it just doesn't look right IMO. And from a construction standpoint, I don't care for the 3 screw neck. Most of the ones I've played, it seems the neck moves slightly in the pocket. I know those weren't all of the CBS era ones.
|I don't mind the different logo as much. And the 1983, 2-knob strat is just a travesty. 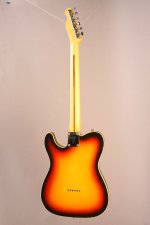 with a huge flame maple neck . This is the real deal and really nails the "Keef " tone in a huge way . 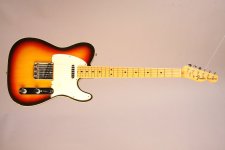 I agree there are two sides to the CBS story, pre-CBS and post-CBS. I like pre-CBS.

Here are a few other guys that didn't seem to have any issue playing CBS era Strats: 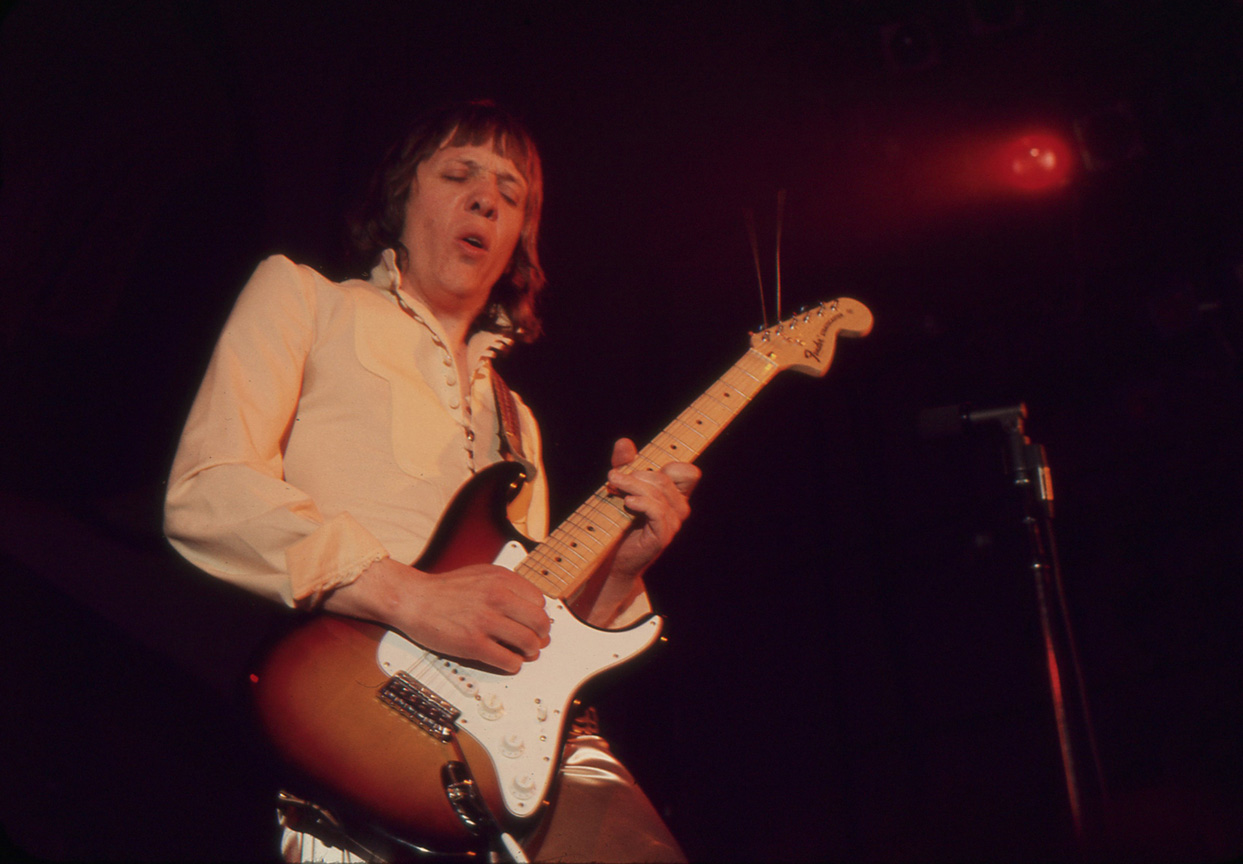 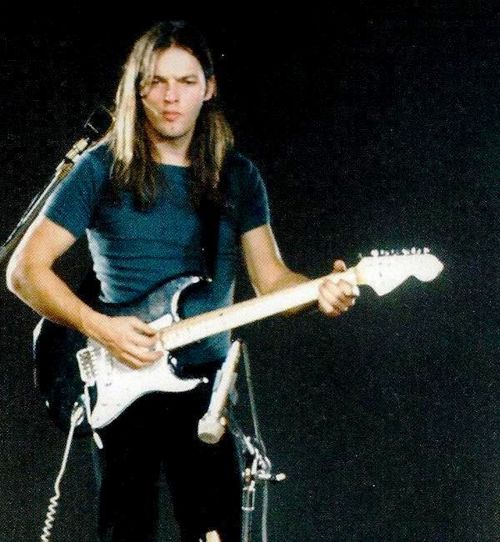 I've bought/sold/played plenty of mediocre ones, but I had a '74 Tele Custom cross my path and it's a serious keeper.
Magic guitar...for me, anyway.
YMMV.

Another CBS Stratocaster player was Fast Eddie Clarke of Motörhead, who had his Strat refurbished with DiMarzio humbuckers. 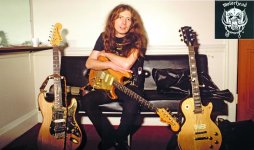 Many of the perceived ”negative“ CBS era changes actually originated with Leo Fender. For example, the large headstock was first introduced on the Jaguar in 1962. The three bolt neck with micro-tilt and the bullet truss rod were developed and patented by Leo during the period when he served as consultant to CBS between 1965-1970. The bullet truss rod was designed to make it easier to adjust the truss rod without removing the neck. The three bolt neck was necessary for the micro tilt device, which eliminated the need to shim the neck. The three bolt neck got a bad reputation during the high production CBS years because was not always properly drilled, causing the neck to sometimes shift. Leo used the three bolt neck and micro tilt in his later Musicman and G&L designs, and they were always rock solid.

Here's my '79 I bought with a student load back in the day. I changed to Noiseless pups and a white guard to get the jimi vibe going. I still break it out once in awhile at a gig. Plays well, weighs a lot! 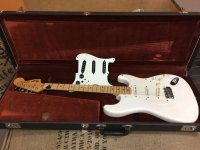 I have a 79 hardtail Strat in the antigua finish.
It's the worst guitar I own, including a budget end Stratalike I picked up off ebay for £100.
If 70s Strats are your thing, get a reissue. It'll be vastly better made than an original.

Gilmour played 4-bolt strat.
Blackmore very often too.
And Jimi never lived to play the infamous 3-bolt version.
My take is he would not have liked it. The way he would swing a guitar around, the neck was doomed to shift in the neck pocket before his act was 10 minutes in. Leaving him with a catastrophic unplayable CBS-thing in his hands. And that ain't too good!

Do I like the boat anchor CBS 3-bolt strats with thick poly finish, thin sounding pickups and die-cast saddles/trem block? NO!