Your Best Concert Ever?

Some of the best concerts I've ever seen weren't rock n roll...Got to see Stan Getz in a tiny little venue on Pico in Santa Monica in about '88. A year earlier I saw McCoy Tyner playing in a small club in Chicago. Two fabulous performances in small, intimate settings.

As for rock n roll. The best concert I ever saw--and this came right after having seen Cream and Hendrix--was the original Fleetwood Mac. Absolutely the most exciting, dynamic and joy-filled performance I ever saw! Next was the same band but with Christine Perfect replacing Green...they did mostly stuff off Kiln House...I believe it was shortly before the record came out, but I'm not certain. Also an incredible performance; Danny Kirwin really stepped up! But the concert with both Green and Kirwin (and Jeremy) was just astoundingly good. I've never heard better improvisational work in rock music; they listened to and played off eachother sooooo well!

LeonC said:
Some of the best concerts I've ever seen weren't rock n roll...Got to see Stan Getz in a tiny little venue on Pico in Santa Monica in about '88. A year earlier I saw McCoy Tyner playing in a small club in Chicago. Two fabulous performances in small, intimate settings.
Click to expand...

Due to a variety of family issues, we traveled from California to the east coast pretty often from 2001 to 2003. I was able to catch (on different nights), McCoy Tyner, bassist Ron Carter, guitarist Mike Stern and of course, Les Paul at the Iridium Club. And Bobby Short at the Cafe Carlyle. Those were all brilliant shows, in venues that catered their customers in a very different fashion than seeing mammoth rock concerts at the Spectrum and JFK Stadium in Philadelphia.

Definitely Bruce & The E St Band. Namely this concert made me feel the most perfect. I was there with my girlfriend and then we had just started to meet and namely this concert united us and made us understand that we are created for each other.
In general, I really like concerts and before the pandemic, I was very active in this regard.
The last concert I went to was organized by stage hire company based in London and I really liked it. Knowing it was the last concert I was at before the pandemic...
I hope the coronavirus phase passes sooner and we can get back to life before.
Last edited: Aug 8, 2020

sarahschreiber said:
In response to the current "Your First Concert ?" thread, I thought it might be fun to ask which concert was your favorite(s). Probably the most fun I ever had at a concert would have been seeing The Brian Setzer Orchestra live. The music was fun, infectious and Brian and the band seemed to be having a blast! There are other bands that I like more, but for sheer fun, nothing ever came close. Which were your favorites and why?
Click to expand...

Metallica! On September 28, 1991, the Monsters of Rock concert took place at the Tushino Airfield in Moscow Russia

sarahschreiber said:
In response to the current "Your First Concert ?" thread, I thought it might be fun to ask which concert was your favorite(s). Probably the most fun I ever had at a concert would have been seeing The Brian Setzer Orchestra live. The music was fun, infectious and Brian and the band seemed to be having a blast! There are other bands that I like more, but for sheer fun, nothing ever came close. Which were your favorites and why?
Click to expand...

One of my most memorable concerts was early in the Lou Reed Rock and Roll Animal tour in the 70s. The presentation of the RnR Animal version of the Sweet Jane Intro was something I'll never forget. Hunter and Wagner were mind bogglingly in synch. Seemed even better than the album version, if that's even possible....... Always been one of my favorite 2 guitar extravaganzas. Those guys were sooo good!

The Who '79. It was a week or two after the Cincinnati debacle.
Next best was Living Colour in '89

The Eagles about 5 years ago in New Orleans Arena.

Steuart Smith had taken over for Don Felder, and he was a very pleasant surprise -- amazing guitarist. 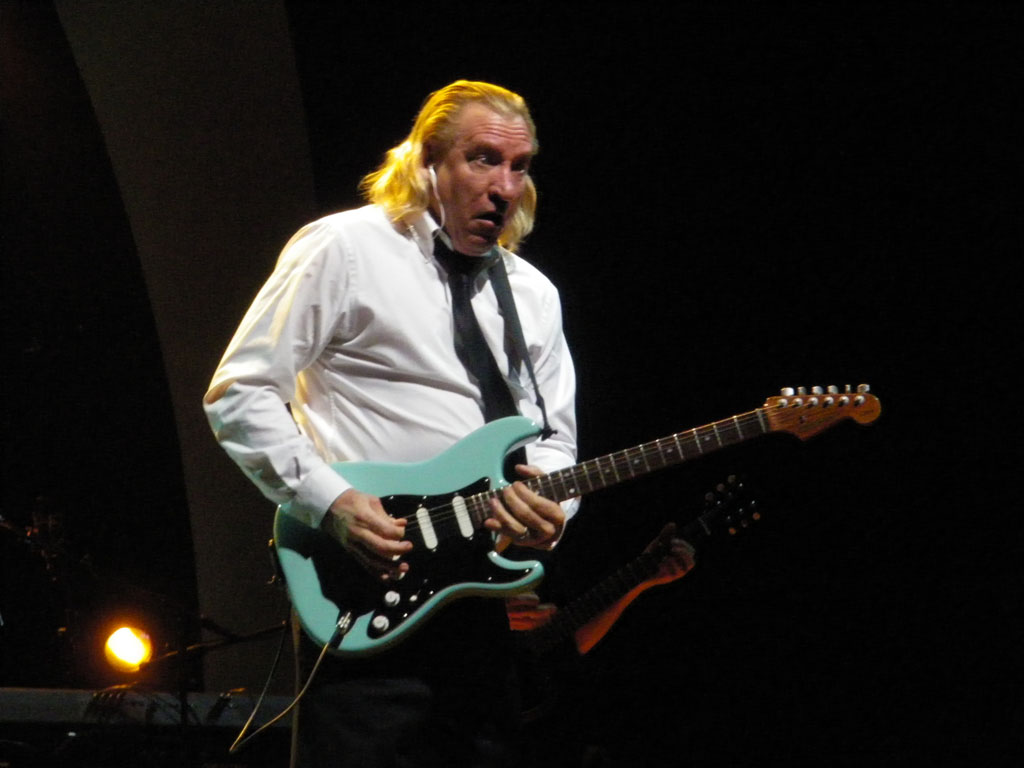 Standouts for me were Rory Gallagher '80 and Plant/Page in '96.

The old Scheafer Music festival at Wollman Rink in Central Park (NYC) was magical. It ran from 1967 to 1976, an amazing and diverse period in music. Cost was minimal and if you got there early enough, you could sit literally right by the stage. All those shows over all those years, plus all the other local venues then and now, my two favorite concerts were at the Wollman Rink in the summer of 1973 one month apart. King Crimson on the Lark's Tongue's tour in July, then in August for the first time, Mahavishnu Orchestra. This was the concert they made the Nothingness to Eternity album out of. We sat a few rows from the stage. I was stoked. When they started Trilogy, Cobham hit the gong and I thought that they were about to do Birds of Fire. I yelled out "Yeah!" (I have a loud voice). It made the recording. When people ask me now where they might have heard me before, I always tell them that I was on the third Mahavishnu album before they disbanded (with the appropriate story, of course)

So, many shows over so many years. I wish I had kept a running list. The Fillmore, My Father's Place, the Village jazz clubs, all the college theaters, so many places, all those acts coming up then and now either only a memory or repped by a tribute band like Musical Box (good show unto itself) but one that is still going after all these years and still pleases live, Tower of Power, the Energizer Bunny of bands.

Worst concert? Now that would make an interesting thread.

I'm still waiting for my best concert to be organized... I'm actually wondering if it is possible to be hired even as a volunteer maybe to organize a concert of my favorite artist. I've organized few events already, I know the process and have great contacts, for instance stages from https://www.outdoorstages.co.uk/, many sound and music services as well. Call me karizma is not that popular, so it's possible to be hired, I guess. I would really love to combine listening to my favorite songs in reality, helping to organize a great event and enjoying the experience of being just next to call me karizma.
Last edited: Jan 13, 2021
E

WOODSTOCK WAS NOT SO BAD.
K

There are several which stand out.

I saw Aerosmith in a park in Fall River, Massachusetts just before "Dream On" was released.

1977, KISS in Providence, R.I. I was in the third row, center. It was the first concert that my friends and I bought tickets to.

1980, Cheap Trick at the Ocean State Theater in Providence. They were just coming off the success of Live at Budokan. The show was filmed. Joe Perry came out for the encore and played "Day Tripper" with the band.

1986, Foghat at Rocky Point Park in Rhode Island. I ended up hanging out with bassist Craig MacGregor and spent several hours on their tour bus drinking beer and talking about music and gear with him. We lost contact for a while but reconnected many years later. Every time we talked, I asked him to sell me his blue 1965 Jazz Bass. He always politely refused.

2003, KISS and Aerosmith in Mansfield, MA. It was special because I took my son. He was 14 years old at the time and it was his first concert. he's been a fan of classic rock ever since.

2006, Paul McCartney at TD Garden in Boston. Special because it was Paul. He was 64 years old at the time and played for almost 3 hours.

2019, Celine Dion in Las Vegas. My wife is a huge fan of hers so for Christmas 2018, I bought her tickets to the show and booked a suite at the Palazzo. I actually enjoyed the show much more than I thought I would. To see how much my wife enjoyed the show was definitely worth the money I spent.

I'd have to say the Smashing Pumpkins Reunion (excluding D'arcy) in 2018 for their new album. I remember spending a ton for front row and standing for three hours, but they did a fantastic job as they played most of their older stuff and the new single which at the time was Solara. The value of the tickets were fantastic for a three plus hour set.

I've seen what I consider to be some great concerts. I'll relay the story of the best and why:

My family and I were at Disney World about 2 years ago. As some of you may know, Disney will book fairly big names to play concerts in the Pavilion outside America in Epcot. We are a pretty musical family and my 5 and 7 year old (3 and 5 at the time) noticed that The Lovin' Spoonful, a band they recognized from our home listening even at thier young age, were to play the pavilion around dusk that night. We had gotten to the park late anyway and were planning on dining in Epcot so we saw no harm in hanging out a bit longer and using the concert as a nice interlude until the now retired Illuminations fireworks show.

Having been burned by older acts not living up to the expectations i had set on previous occasions, and understanding that John Sebastian had long since not been associated with the band, I resigned myself to the inevitability that it would be the typical has been group making the circuit. How cynical of me, right?

Boy was I wrong. We sat down and were treated to a wonderfully intimate concert with 3/5 of the original band, with Joe Butler, a founding member and the original drummer, taking lead vocal duties. They were humble, grateful, professional, and exciting. They played all the most famous Spoonful songs and we walked away astonished by the fact that there were maybe only 200 people in direct attendance at the amphitheater.
T

the best concert i ever saw was springsteen and e-street on 5 august 1978. but i have gotten tired of writing/talking about that.

the other great concert was Brownsville Station in august 73. Cub Koda! they were pure, crazy, rock fun and i wish i could go back in time and see them again. Cub was wearing a striped "coach" shirt, playing a LP painted to match his shirt. they were a blast.

The cheesy Eagles Tribute Band I saw the day after New Years this year in Granbury, TX -- because it was my first live concert in a year. Everybody wore masks, every other row was empty to encourage "social distancing" and everybody appeared to have a great time. I'm not a big Eagles fan, but it was certainly was great to hear live music again.