So I've decided to breathe new life into my dad's old LP custom. He got it as a teenager in the seventies and it's in pretty rough shape. He traded the original bridge and tailpiece for chrome ones with one of his buddies and at some point he replaced the original pickups with single coils (unfortunately, he didn't keep any of these parts). He played the hell out of it, but after he passed away it sat in its case at my mother's house for many years. I'm giving it some TLC now, cleaning the grime off the fretboard and polishing it though the finish is a bit chipped here and there and the binding is completely yellow. The selector switch seems to be faulty (it won't stay on "rhythm" for some reason) and the input jack was pushed into the body, though it was an easy fix. Some of the frets are pretty worn out too though I haven't had too many issues playing it. Right now I'm a bit torn between keeping it is as it is (as he played it) or trying to restore it as close to stock as possible. Any thoughts? I'm not sure about the year he bought it either, I'm guessing mid-seventies from the look of the tuners and the un-dotted "i" on the Gibson logo.

Is there a way to find out? The last guy who could have told me more about this guitar was my uncle and he died a year ago. I'll check out the pots for serial numbers later on.

I am sorry for the loss of your Dad and Uncle.

I think that you can leave it as is or change it to how you like it. Either way, you will be honoring your father and you will think of him whenever you play it.

If its a 54 reissue custom .
Thats what it looks like.
The Selector switch, try and loosen the switch tip and see if it stays.
Last edited: Jun 25, 2022

I would clean it up and play it like your dad liked it.

Are the control pots original? You can find the year of the guitar from those.

If it is, I'd be inclined to get a good repro set of correct pickups (I think Lollar makes a P90 Staple) and keep the rest of the guitar the way it is. I can't recall if they were 'fretless wonder' frets, which were really low. If it's difficult to play, I'm not against refretting, I've refretted lots of my guitars.

Edit: on doing a bit of reading, it looks like the '72 '54 Reissue serial numbers started with "LE" for Limited Edition. Someone that knows about these might jump in.
Last edited: Jun 24, 2022
P

A '54 re-issue would have no maple top as well as an Alnico "stapple" pickup in the neck position. The routing is deeper than the routing for a P-90. And as stated by Dwagar, LE would be stamped on the back of the peghead.
On the picture, the pickup routings don't look to have been modified for p-90s. The covers are missing but the hardware seems to be gold plated. If the pickups are original and the guitar is not a '54 reissue, it would be a very rare bird.
Last edited: Jul 18, 2022
M

Yeah, I'll probably keep it the way he liked it,l. I tried loosening the switch tip but no dice. I had a look at the pots and couldn't make out the serial numbers because they're covered in wax (see pic) but the capacitors don't look familiar. The pickup routes are about 1 1/2".

Does the "2" above the serial number on the headstock mean anything? I thought it meant it's a factory second but from what I've read it might mean it was sold directly from the factory. 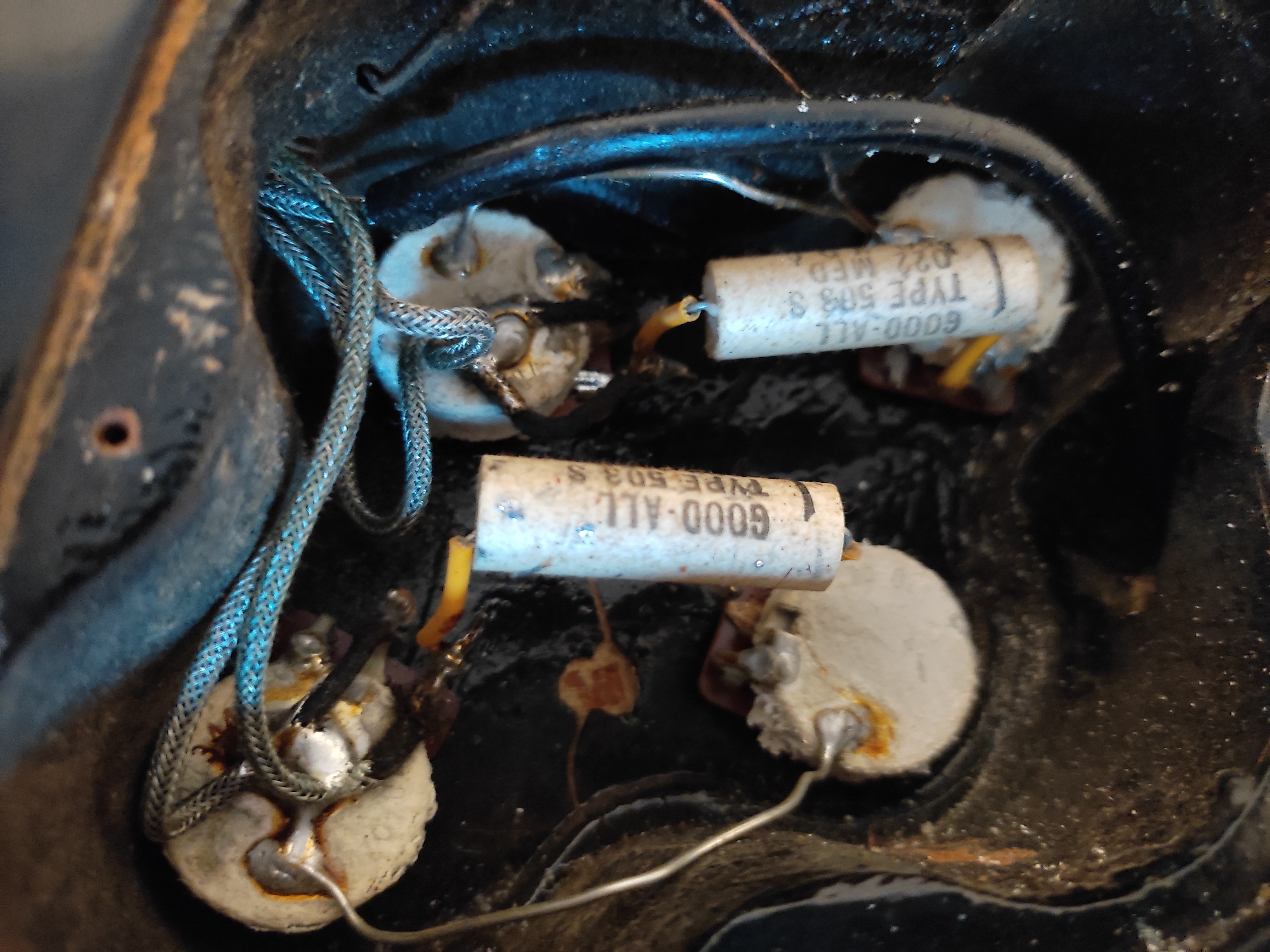 Hardware does not appear to be gold plated .

The 2 means that the guitar was a factory second.

AA00475Bassman said:
Hardware does not appear to be gold plated .
Click to expand...

A stated by the OP, the bridge and stop tailpiece have been changed for chrome plated. As well as the pickguard bracket apparently. But the tuners and pickups screws are gold plated.

Lollar and others do make a staple pickup that will fit a regular P90 rout -- and I've tried the Lollar version and it's a good pickup -- but they do not sound the same, to my ear, as an original-type staple pickup. Seymour Duncan does make an accurate staple. But the depth of the routing should be yet another indication of the guitar's being or not being a '54-style reissue.

The OP said the pickup routes are about 1 1/2", so humbuckers I assume. It would have originally come with stickered TTops. Too bad they are long gone, I really like TTops.

But looking at the pic of the top, it doesn't look like it had screw holes for humbucker rings, or the pickguard clearance for them, or space between the fretboard to neck pickup route. Am I missing something?
Last edited: Jun 25, 2022

I'm not nagging, but the neck cavity would definitely show if it's a '54-type reissue, because it would have quite a deep channel to accommodate the magnet height adjustment mechanisms for the six magnets.
M

By the way, here are some closeups of the pickup routes, please let me know if you want me to take pics of any other parts of the guitar. You've all been very helpful and I'm humbled by the knowledge on display here. Thanks again 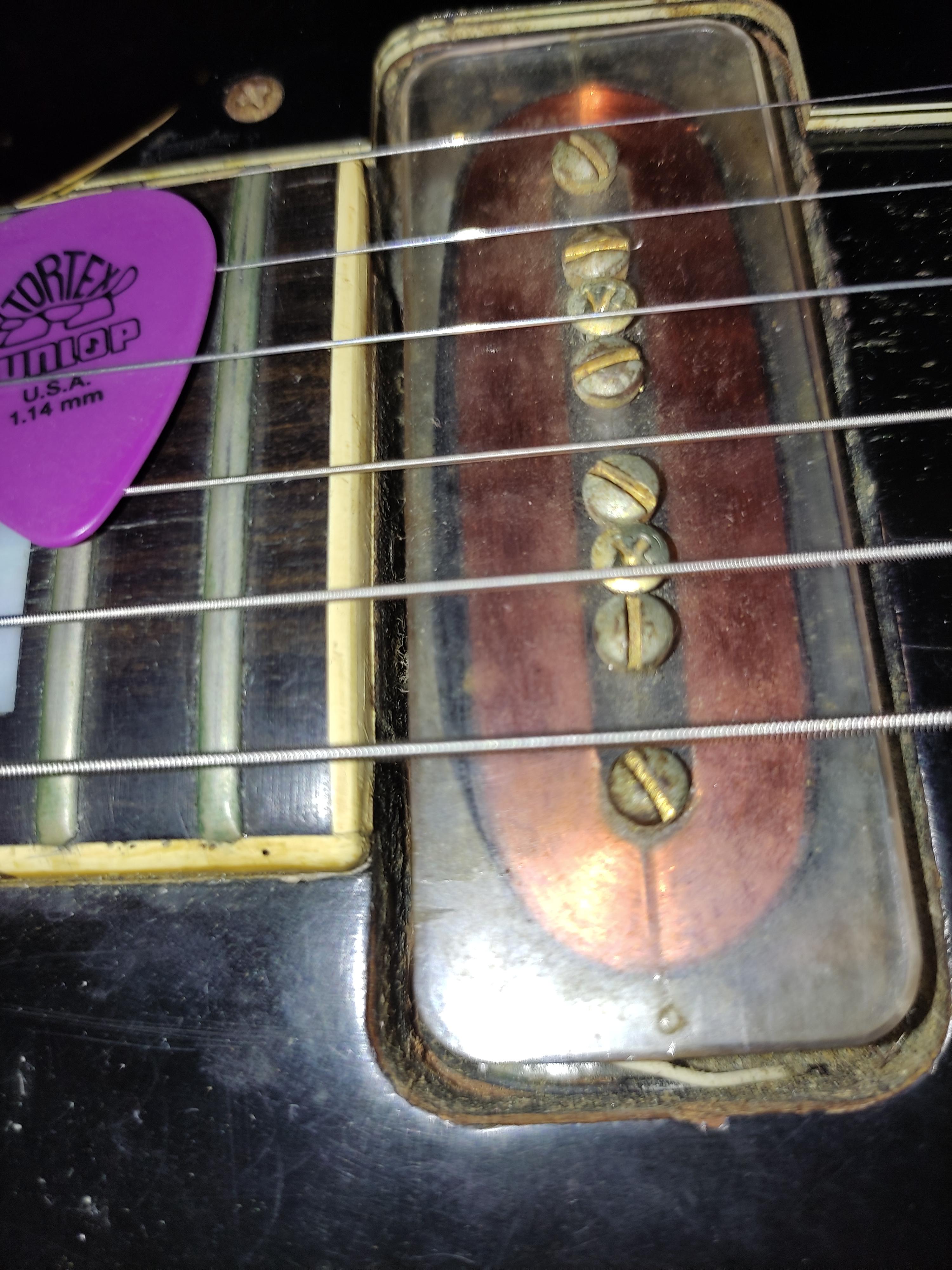 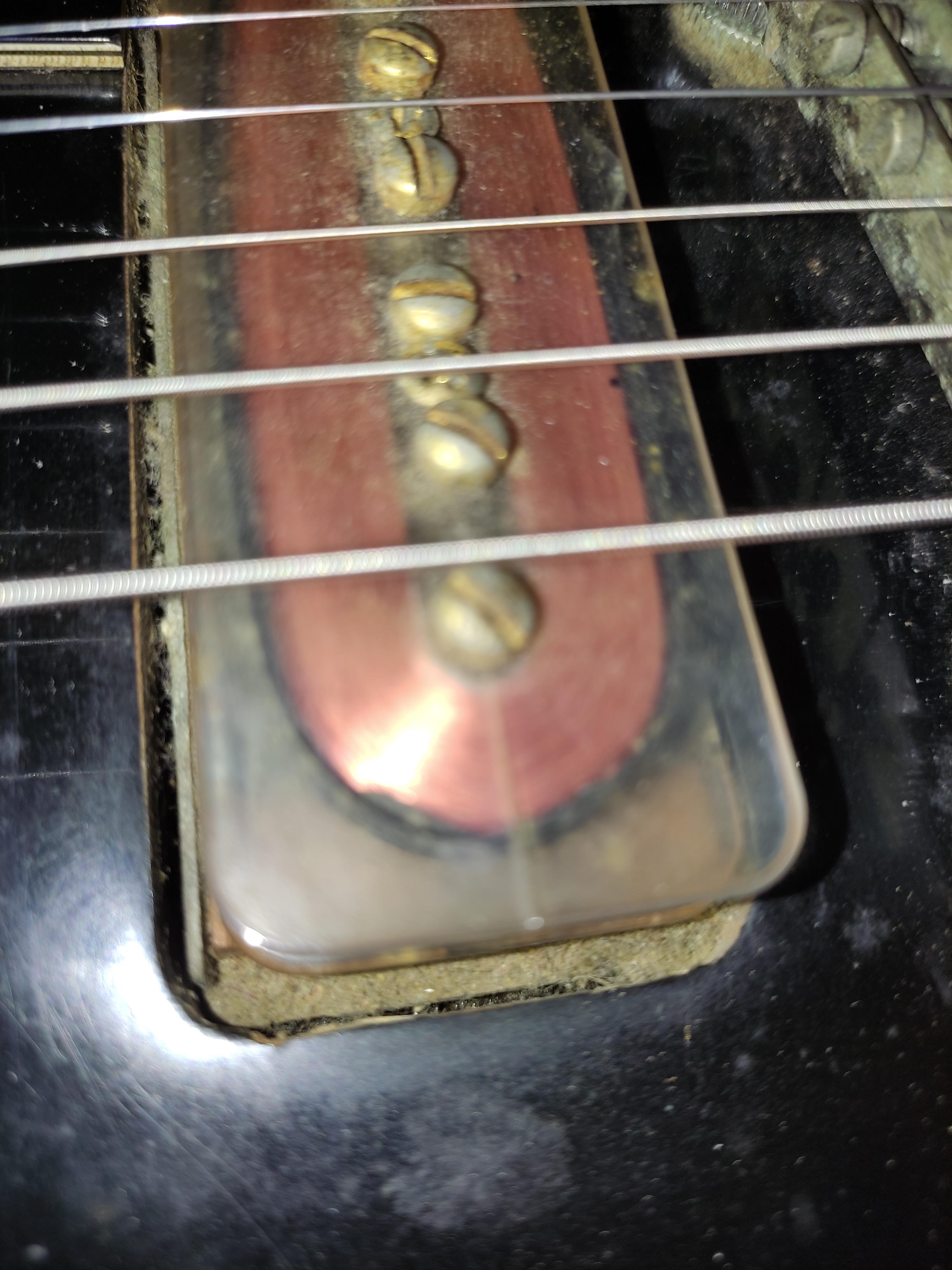 Fantastic that it has the original pots so you can date it.