Zapper said:
Hey guys, to save another 'victim' having to read through 23 pages and 900 comments of this thread to work out whether he's been ripped off or not, I thought I'd record a quick video to summarise the issues and things to look out for. If I've missed anything, please leave a short explanation in the youtube comment section (or below on this thread.... or both..!).

Finally, thanks once again to all contributors for your help and expertise... :salude

Over & out!
Ian Zapper Francis

Nice casual shot of the Fezza at the end...

You’ve got to crack a few eggs to make an omelette.:spabout

CDaughtry said:
You’ve got to crack a few eggs to make an omelette.:spabout
Click to expand...

fakejake said:
Nice casual shot of the Fezza at the end...
Click to expand...

Hey guys, I've just noticed that this thread now has 925 posts.... which I think makes it the biggest thread in the Vintage '52-'60 pub... Is that right? The Black Beauty thread currently has 923.

The guys from Elite Vintage Guitars (https://elitevintageguitars.com), Gareth and Ian (maybe his alrerego) think we are stupid but they are making a fool of themselves.
My story with them started over a year ago when they had a fake 1963 "artic white" Stratocaster for sale and promoted on Facebook that was obviously a fake. Good advices from others were thrown out the window and the same what's happening here was happening then. The seller(s) defended his guitar by any means while others pointed out the many things that were wrong...

Since, this Gareth Ayers guy has been posting and selling a lot of crap on Facebook... Including a fake '53/'54 goldtop, a fake '58 goldtop, one or two fake '56 goldtops and very questionable bursts ('58, '59,...)
I was sent different pictures from contacts of him that were interested where it was plain obvious that some were bad copies.
So this is not a stand-alone case.

So, please stop legitimizing this crap and prevent others from taking a big loss on some forgeries fitted with period correct cases and parts.
Click to expand...

Hi mipstoo, fascinating to now read your post above.... Are we friends on Facebook? If so could you drop me a line please? There's something I'd like to ask you. And thanks for your very interesting & helpful post!

And YES, they are pretty ironic now LOL...!! :rofl:salude


Jumping@Shadows said:
I just had a look on elitevintageguitars.com and found the same ‘70s wine red Les Paul Custom for sale as in the group photo ‘Ian’ posted: 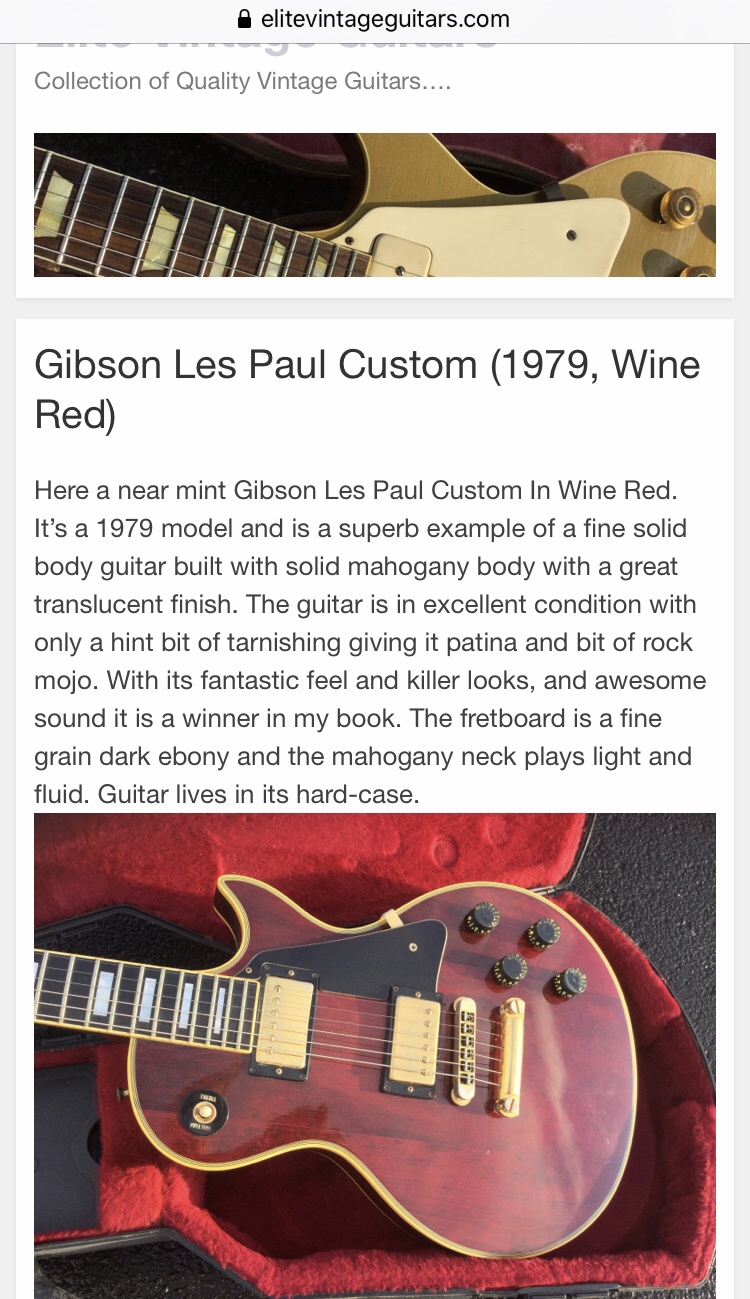 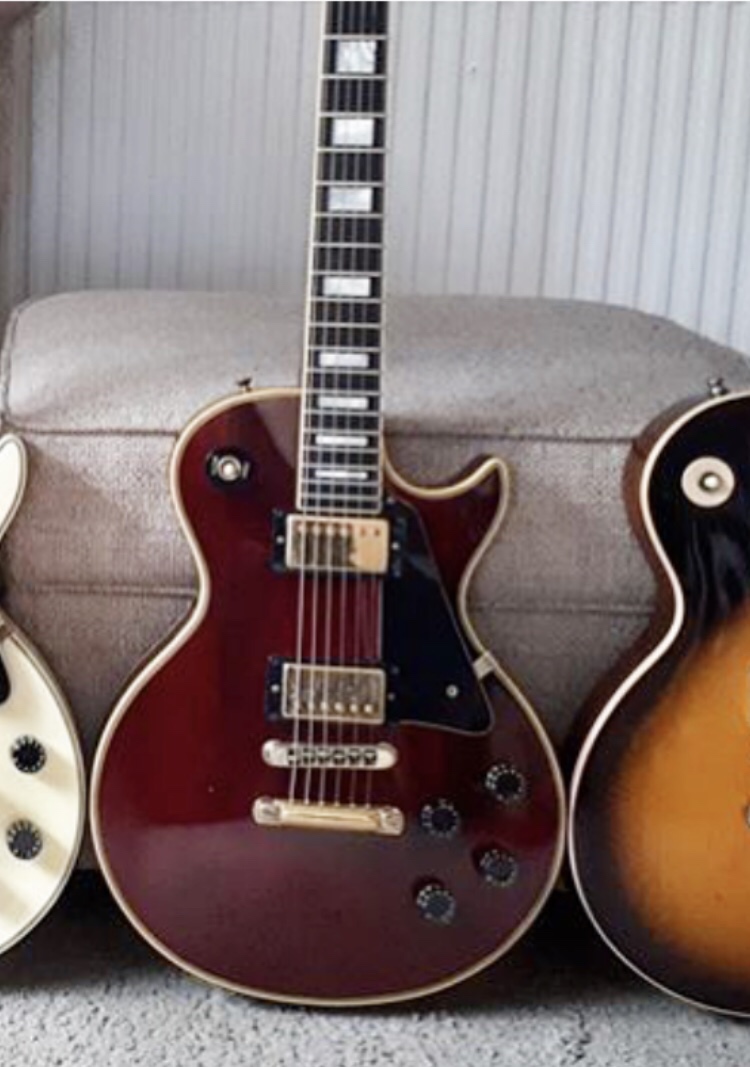 Note the unusual bridge, grain line through the switch/upper bout and small white knick on bass side lower bout.

Also, the ‘58 Les Paul’ is the same one held by Gareth Ayers in a FB post: 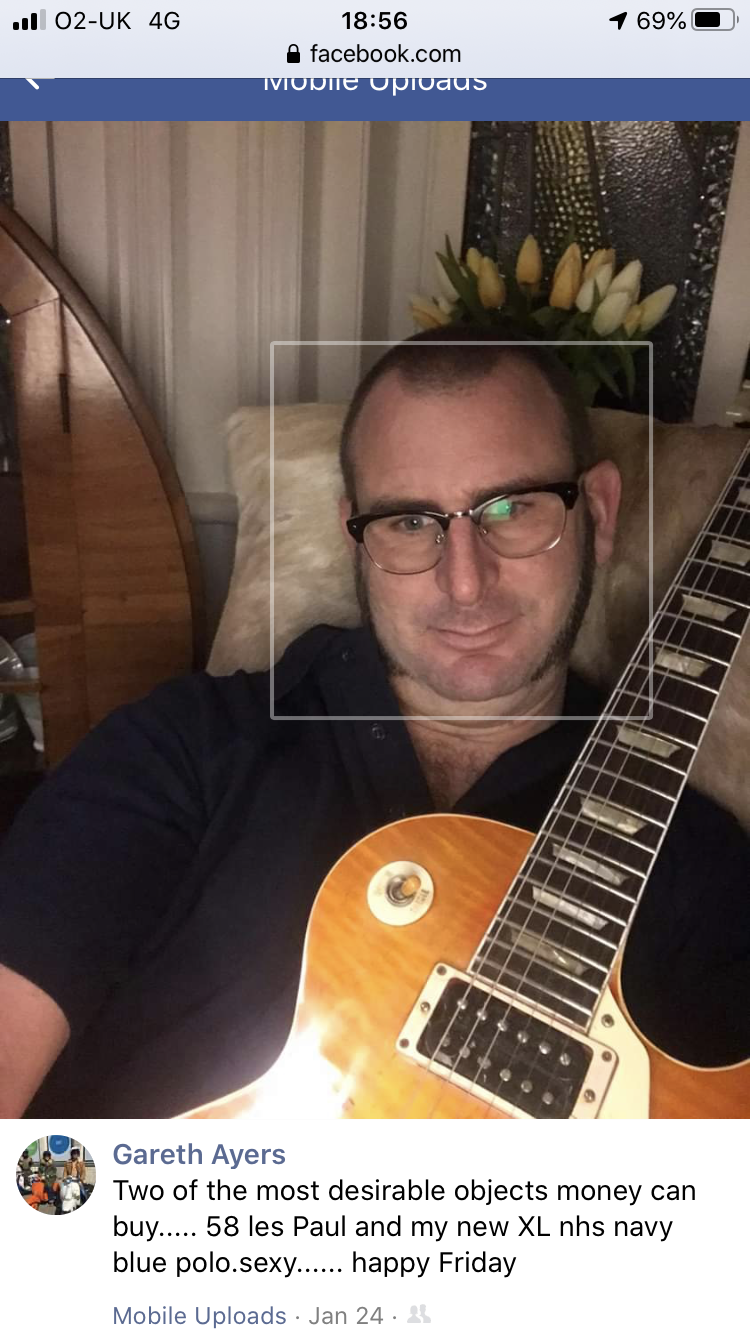 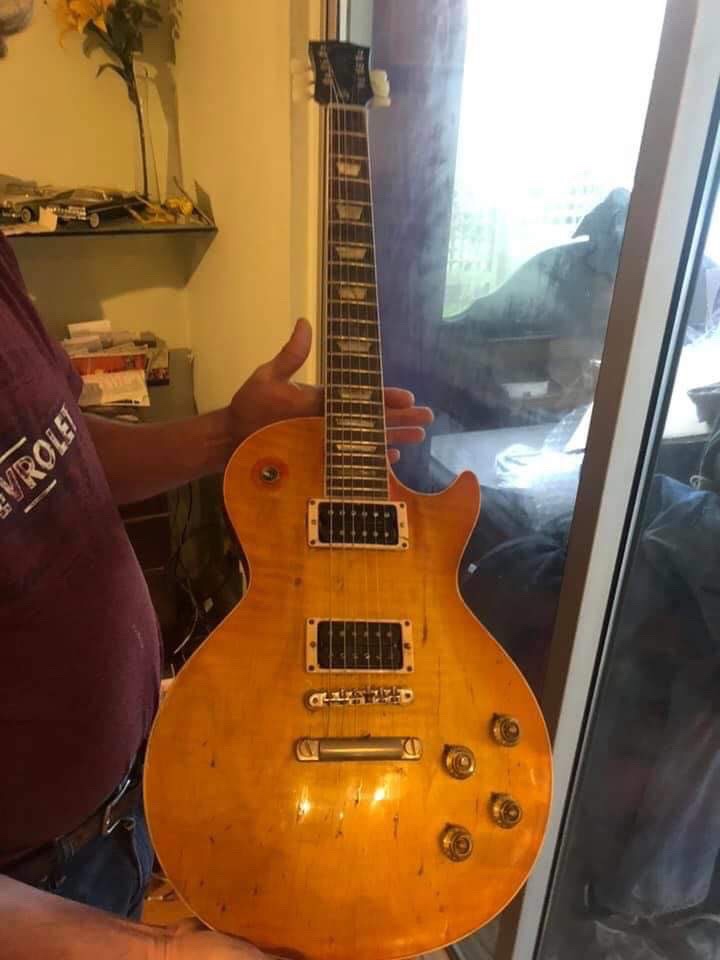 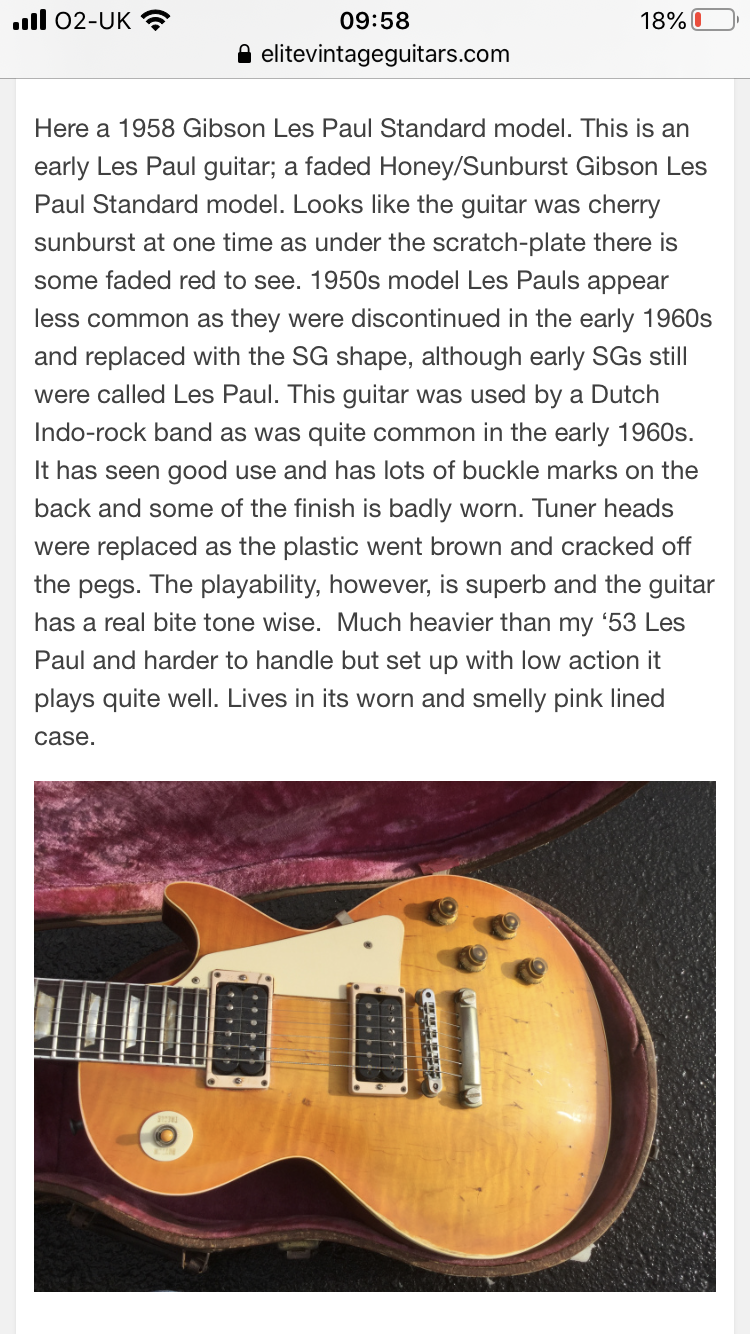 What could all this be about?
Click to expand...

Strangely they've actually kept this guitar and paid me a decent price for it.... So at least SOME of their collection is genuine..! :spabout

It's fascinating (and hilarious..!) to read back through this thread with the hindsight we all now have....! And boy is there some good authentication stuff here too. Far better and more detailed than you'll find in any book..... Well done to all!! :salude

I wonder if The Nile started out in life as one of these...? Excellent copies by all accounts.... :hmm 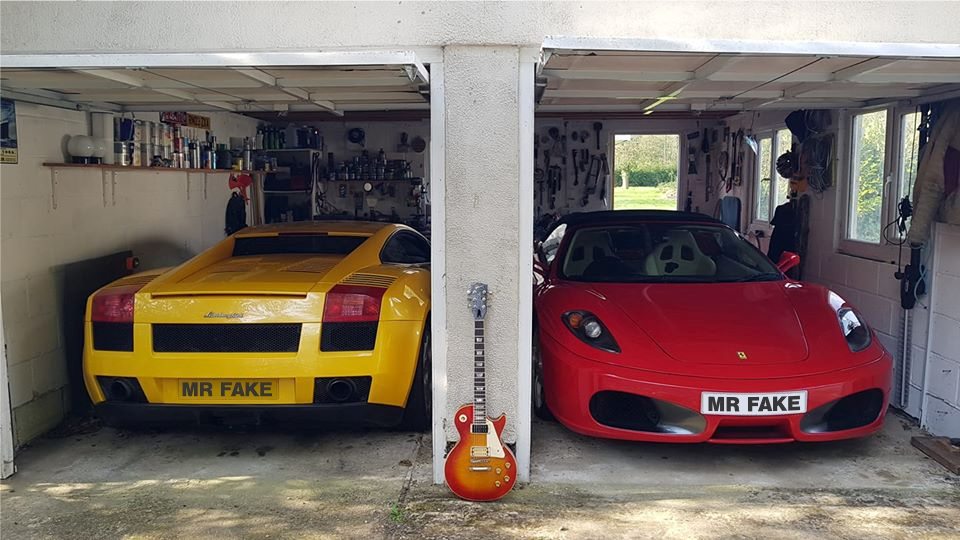 Blimey Guitarmikey, I didn't notice my new numberplates before......! You got Photoshop for Christmas then eh?! Thanks for that.! :spabout:rofl


Zapper said:
Blimey Guitarmikey, I didn't notice my new numberplates before......! You got Photoshop for Christmas then eh?! Thanks for that.! :spabout:rofl
Click to expand...

Those are yours? For some reason, I thought they belonged to Gareth...


KennyF said:
Those are yours? For some reason, I thought they belonged to Gareth...
Click to expand...


Jumping@Shadows said:
The ‘chew’ mark in yours is smooth and not the result of the forstner bit catching the lip of the cavity after the inset for the pots was drilled and roughly tearing out the mahogany.

More damning is that your cavity is the wrong shape at the 12 O’Clock position where the angled secondary route leaves a definitive V shape narrowing as it meets the maple floor- yours is square, plus the ‘lip’ for the control plate is too narrow in places.

I’m pretty sure the pickup leg holes on the front cavity are too shallow as illustrated here: 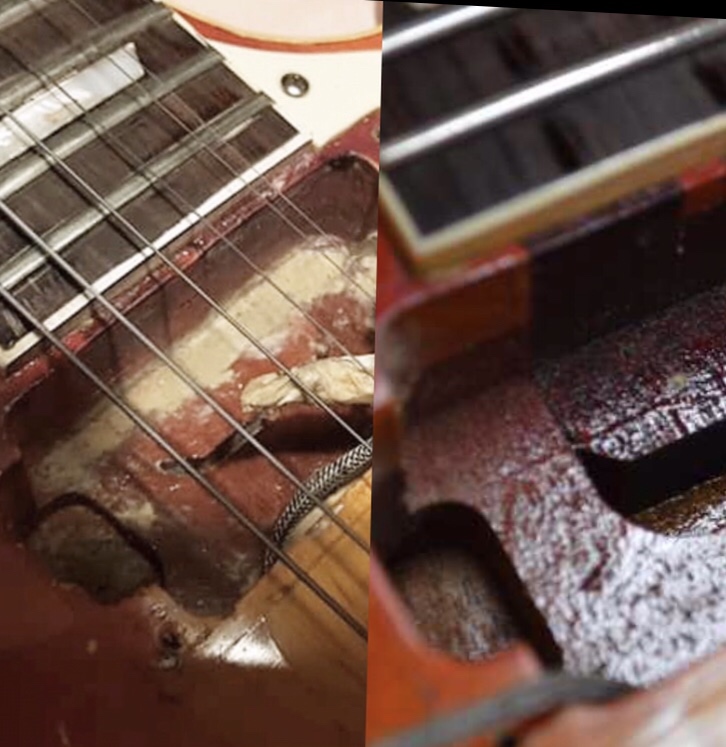 As for the headstock- it’s the exaggerated ‘dome’ on the top of the moustache which is clearly wrong, and notably similar to a fake ‘50s Les Paul in the UK I was shown last month: 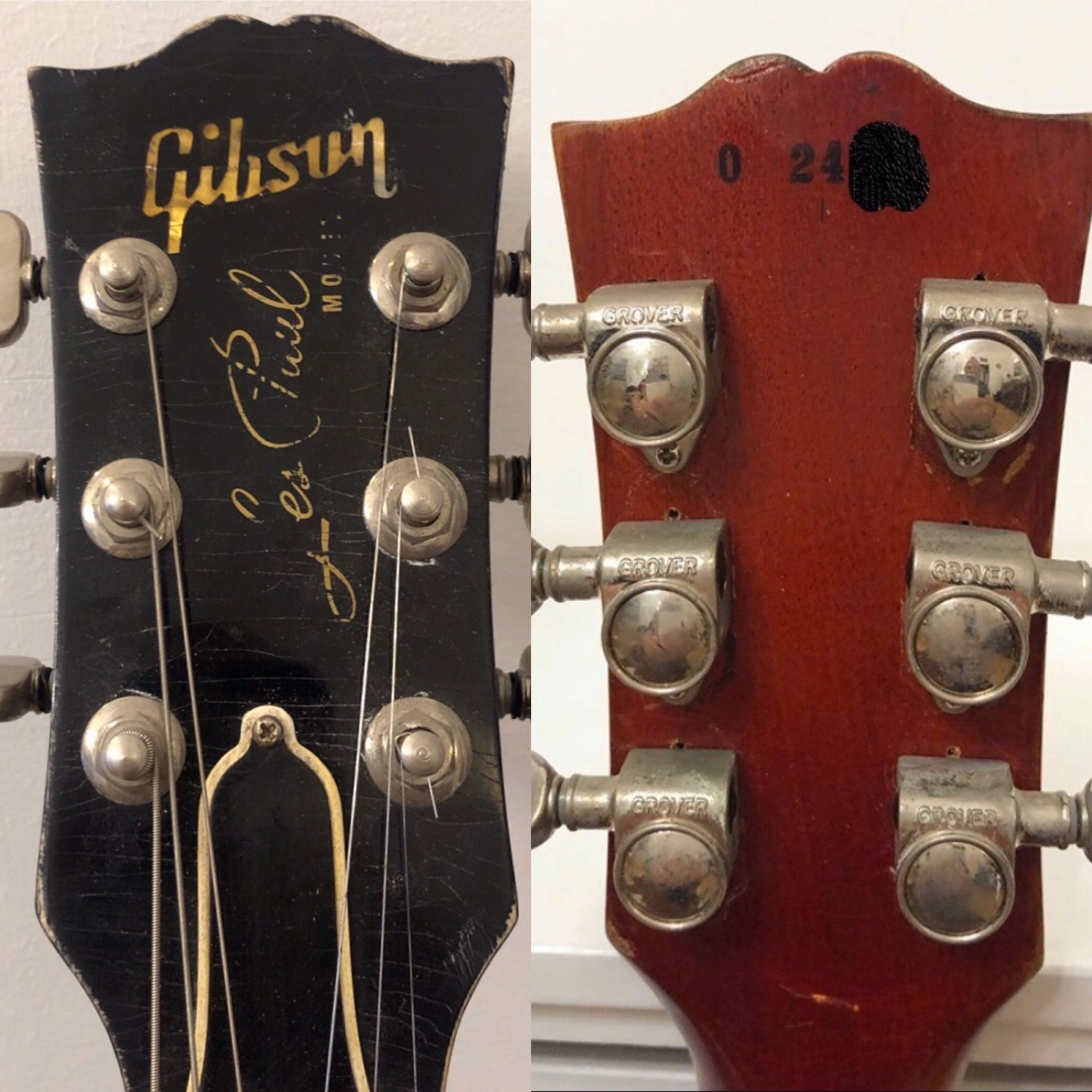 As for the wiring channel bring in the wrong spot, I’ve seen these vary a good deal in the ‘52-‘55 range, but taking all the red flags pointed out by a number of highly knowledgeable members who have scores of vintage Les Pauls at their fingertips for decades I’d take their comments on board, that it’s either the most anomalous original ‘60 Burst any have seen, or fat more likely a fairly crude replica, of the common kind seen regularly pop up in the UK every couple of years. YMMV etc
Click to expand...

I just reread this post of yours Mr Jumping Shadows...! I should have stopped my cynicism right here and demanded a refund immediately... As Trump would say... GOOD JOB....GREAT JOB....! :salude

Strangely they've actually kept this guitar and paid me a decent price for it.... So at least SOME of their collection is genuine..! :spabout
Click to expand...

I, for one, would like to see a 79 mahogany necked Custom, when every other one had a maple neck. These guys are experts?


Flogger said:
I, for one, would like to see a 79 mahogany necked Custom, when every other one had a maple neck. These guys are experts?
Click to expand...

Blimey...! All my photos of "The Nile" have disappeared from this thread...! Anyone know why? Do they just get deleted automatically after a few months? Or is there a copyright issue??! :hmm
B

Well this has been an education. I started to skim read towards the end, was losing the will to live. Any ways, time to shoehorn that 10 inch creamback into my Origin 5 combo, at least I shall have accomplished something today.
S

Oh boy, did they.
I've a mate who had a 1980 LPC, back in the 80s. Maple neck, bridge in the wrong place... F***in' awful POS, then again, he only played punk on it.
I had another mate who switched from Yamahas to Gibson in 86. They supplied him with a couple of Standards and Customs. From what I remember they still had maple necks, but they got the bridges in the right places, by then.
I think 86 was when Henry J took over and they started making them properly again. Henry J has had a bad rap over the last few years, but people forget how bad things were at Gibson before he took over.
You'd have begged for guitars as "bad" as the recent stuff, back then.

Brek said:
Well this has been an education. I started to skim read towards the end, was losing the will to live. Any ways, time to shoehorn that 10 inch creamback into my Origin 5 combo, at least I shall have accomplished something today.
Click to expand...

Oh dear... you should have watched the summary video like everyone else..! :##